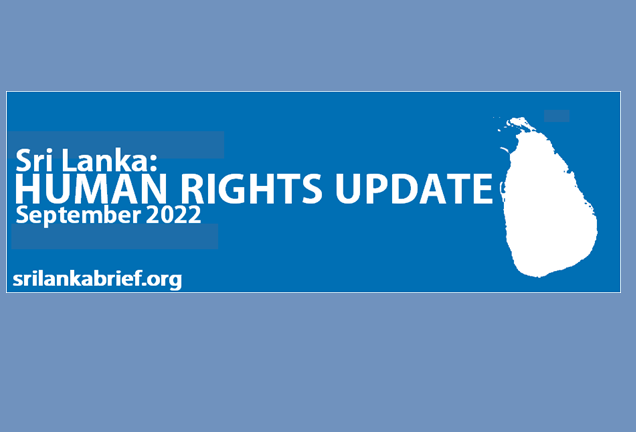 29 Sep 2022: Sri Lanka will seek a vote on an upcoming resolution at the United Nations Human Rights Council and particularly concerned about is an outside evidence gathering mechanism and the long-term prosecution of Sri Lankan armed forces outside Sri Lanka, Foreign Minister Ali Sabry told media.

28 Sep 2022: Government ordered civil servants not to express opinions on social media after some officials claimed schoolchildren were fainting from a lack of food due to the country’s dire economic crisis. This order affects to 1.5 million state employees.

28 Sep 2022: The Colombo High Court today served indictments on civil activist, Shehan Malaka Gamage in respect of a statement he had made on the Easter Sunday bomb attacks. The Attorney General filed indictments against the civil activist under Penal Code offences for allegedly exciting or attempting to excite feelings of disaffection to the State. The case is to be taken up for trial on January 13 next year. Issuing a video statement  Shehan Malaka reaffirmed that he will stand by his statement and prove its correctness.

28 Sep 2022: Supreme Court issued a Writ of Certiorari quashing the findings, decisions and recommendations of the Commission of Inquiry to inquire and obtain information to alleged incidents of political victimization of Public Corporations, Members of the Armed Forces and the Police Services in relation to Attorney at Law Janaka Bandara Officer of the Attorney General’s Department currently holding the post of Senior State Counsel. The Commission was appointed by former president Gotabaya Rajapaksa.

27 Sep 2022: The Sri Lanka Police refused to provide the number of citizens arrested and detained under the Prevention of Terrorism Act, at a hearing of an appeal made to the Right to Information Commission. The Police lawyer said that providing such information could be a serious prejudice to national security. The case will be taken up on 7th October 2022.

27 Sep 2022: Archbishop of Colombo Cardinal Malcolm Ranjith has called on the Election Commission of Sri Lanka to hold local Government polls in March next year. “It is our right. The people must be given an opportunity to respond to arrogant rulers,” he said. According to him, only an election will allow the people to express their sentiments regarding the Government. Local government elections were postponed by one year on 10 January 2022 and due on March 2023.

27 Sep 2022: Oshan Buddhika & Damith Saranga, 2 active members of the National Savings Bank branch of Ceylon Bank Employees Union were summoned by the Criminal Investigation Dept. today to question them over their involvement in the recent anti-govt. protest campaign.

24 Sep 0222: Police detained 83 demonstrators, including Eranga Gunasekara, national organiser of the Socialist Youth Union (SYU), the youth front of the JVP, during a protest march.  Members from the National People’s Power along with the SYU staged the protest in front of the Lipton roundabout demanding the release of protesters who have been detained under the Prevention of Terrorism Act (PTA) and against suppression.

23 Sep 2022: Government invoked the Official Secrets Act to designate public streets and government buildings in central Colombo “high security zones,” where written permission from the police is required to hold any public gathering. Issuing a statement Sri Lanka Bar Association expressed its deep concern that under the cover of the Official Secrets Act that there is the imposition of draconian provisions for the detention of persons who violate such orders thus violating the freedom of expression, the freedom of peaceful assembly and the freedom of movement all of which are important aspects of the right of the people to dissent in Sri Lanka. (Under pressure President Wickremasinghe revoked the gazette on 01 October 2022)

23 Sep 2022: The Bill titled “Bureau of Rehabilitation Act”, published in the Gazette on 9th September 2022 and placed on the order paper of the parliament. The aim is to t regulate the rehabilitation of the misguided combatants, individuals engaged in extreme or destructive acts of sabotage and those who have become drug dependant persons. Filing a FR petition at the Supreme Court, CPA argues that the impugned regulations violate several of the Constitutionally guaranteed Fundamental Rights, of the petitioners as well as of the general public. The Proposed Bureau of Rehabilitation is a another name for arbitrary detention and torture argues Ambika Sathkunanathan.

Sep 22 2022:  Maritime Pattu local councillor S.Logeswaran was arrested  for participating in a protest against state backed landgrab in Kurunthoormalai, was remanded until Sept.29 by Mullaithivu magistrate on 23rd who ordered to produce him before an identification parade.

21 Sep 2022: Delivering its judgement on the killing of  journalist Lasantha Wickrematunge   The Permanent Peoples’ Tribunal hold the government accountable for his death. The“ Sri Lanka Government violated Wickrematunge’s right to freedom from discrimination based on political opinion and the audacious attack on one of Sri Lanka’s best-known and most outspoken journalists shows a larger problem that independent-minded journalists in Sri Lanka faced during that time and are still facing today, judges noted.

14 Sep 2022: A Lawyer, Dushmantha Weeraratne who was charged with tuning his car horn to the tune of the famous song & Aragalaya theme ‘Kaputu Kaak Kaak Kaak”, was released by the court.The lawyer was charged for installing the horn with the said tune on his car during a memorial held at Galle Face Green to remember the lives lost, and those who were injured during the Aragalaya people’s struggle. Colombo Additional Magistrate M. S. Prabhakaran strictly warned the Fort Police to understand the law before filing a case against anyone.

10 Sep 2022: The World Food Programme stated that more than 6 million people – nearly 30 percent of the population of Sri Lanka – are currently food-insecure and require humanitarian assistance. Reduced domestic agricultural production, scarcity of foreign exchange reserves and depreciation of the local currency have caused food shortages and a spike in the cost of living, which is limiting people’s access to healthy and affordable meals.

10 Sep 2022: Signature campaign calling for the repeal of the draconian Prevention of Terrorism Act (PTA) was launched. The campaign was launched in Kankesanthurai, Jaffna and will travel  to all districts of Sri Lanka and travel to Hambanthota. The campaign initiated by the Ilankai Thamilarasu Katchi Youth Wing, Justice for All and the Alliance of Trade Union & Mass Youth Front organisations, demands the Sri Lankan government to repeal the notorious legislation which has been used disproportionately to detain and torture Tamils and Muslims.

09  Sep 202: Well-known youth rights defender and the National Organiser of Youth for Change (YFC), Lahiru Weerasekara was arrested by Maradana police as he was returning from a peaceful protest at Galle face in Colombo. “Front Line Defenders” issued an appeal calling for immediate release.

06 Sep 2022: In its determination of 22 Amendment to the constitution Supreme Court seriously erred by assuming that the power to dismiss a Prime Minister is an essential part of executive power, wrote Presidential Council, Dr. Jayampathi Wickramaratne.  Further SC decided that three important provisions were part of the Constitution, under 19A now require approval, by the people, at a referendum.

01 Sep 2022: In its investigation report of the violent attack unleased on peaceful protestors at Gota Go Gama (Occupy protest site at Galle Face Green, Colombo) the Human Rights Commission of Sri Lanka  recommend that the President appoints a committee to identify whoever the perpetrators are within the Law Enforcement who are responsible for the breach of the law and adequately compensate the victims who had suffered injuries due to this breach of duty of the Law Enforcement officials.