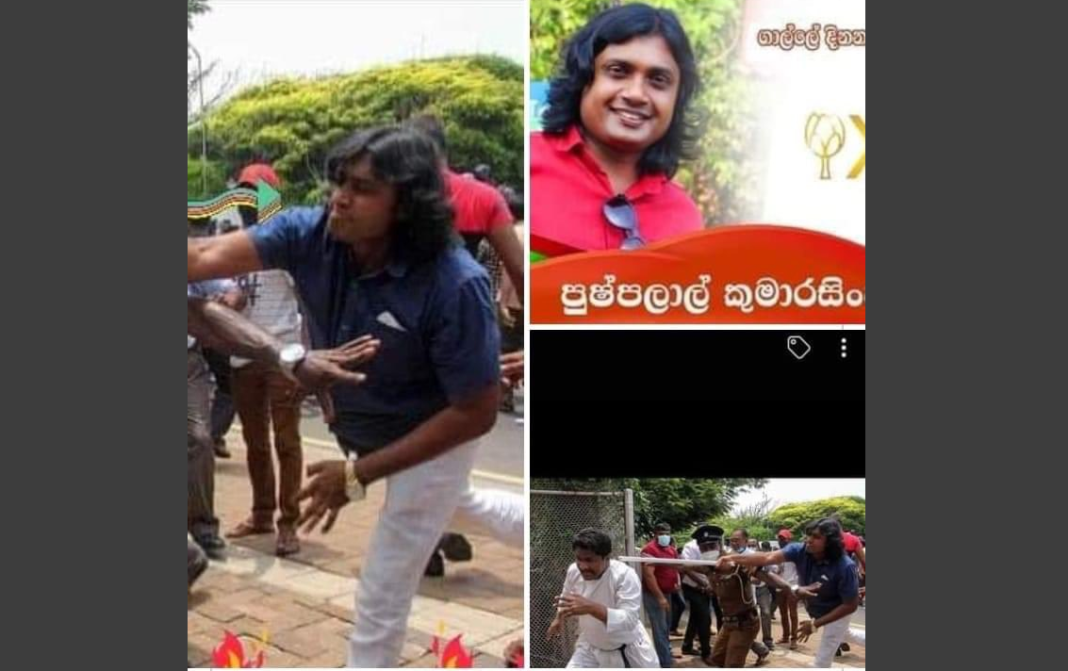 Image: SLPP politician and chairperson of the Ambalangoda Pradesheeya Saba Pushpa Lal was one of the politicians who actively took part in the May 09th assault.

In it recommendations on 09th May violent attack on peaceful protestors on Got Go Gama Human Rights Commission of Sri Lanka left out the culpability of former prime Minister Mahinda Rajapaksa and other politicians who incited and actively participated in the assault. The attackers were organised and armed withing the official residence of then PM Rajapaksa. Although there are clear video evidence of minister Johnston Fernando inciting the attackers HRCSL has not mention any of the politicians responsible for the attack.

It is not clear whether HRC-SL has produce a another report on the accountability of SLPP politicians for the May 09th attack on Gota Go Gama.

HRC SL has only published one and half page  recommendation of 6 page report.

RECOMMENDATIONS:
Whether the Law Enforcement Authorities have Provided Adequate Protection to Uphold the Rule of Law and for the Protection of the Fundamental Rights of the People on 9’o May,2022 The HRCSL had appointed a team of Special Rapporteurs to investigate and report whether adequate protection had been given to the peaceful protesters protesting opposite the temple tree and Galle face Green on 9’h May 2Q22 and whether the Law Enforcement officials took all reasonable steps necessary to uphold the rule of law on 9th May 2022.

The intelligence report though valuable is only one of the numerous sources of information; others are live and direct information coming from the ground (which includes the information from the various participants and informants), CCTV footage etc. The leadership of the police (lGP and the Senior officers) must have a system that constantly analyses all incoming information. The Police should have a system of obtaining all information relevant to prepare the officers for every possible attack.

It was revealed that the police could not accurately ascertain the speeches of the parliamentarians and the other State and non-State officials inside the Temple Trees.
The failure of not obtaining this crucial information is attributed to the intelligence unit under the Secretary of Defense. (The State intelligence Unit)

The Committee should be able to identify the actual officer in command and the nexus between that officer and the officers on command on the ground. And whether the officer
on the ground in command could have decided to prevent the assault. The reason for the officer on the ground not making any decision is the root cause of the clash. What and
who prevented it? That is important to investigate. What is the reason for not placing steel barriers across Galle road to prevent access along Galle Road to the Presidential Secretariat? Unfortunately, the Committee had not taken due measures to provide these basic methods to prevent the flow of people, which inevitably would cause a clash. However. they had met several days to discuss the issue of security.

The HRCSL recommend that the President appoints a committee to identify whoever the perpetrators are within the Law Enforcement who are responsible for the breach of the
law and adequately compensate the victims who had suffered injuries due to this breach of duty of the Law Enforcement officials, The HRCSL further recommends that the President may direct the said committee to investigate the entire system of Law enforcement and identify the responsibility and take necessary measures to deal with such officers punitively.