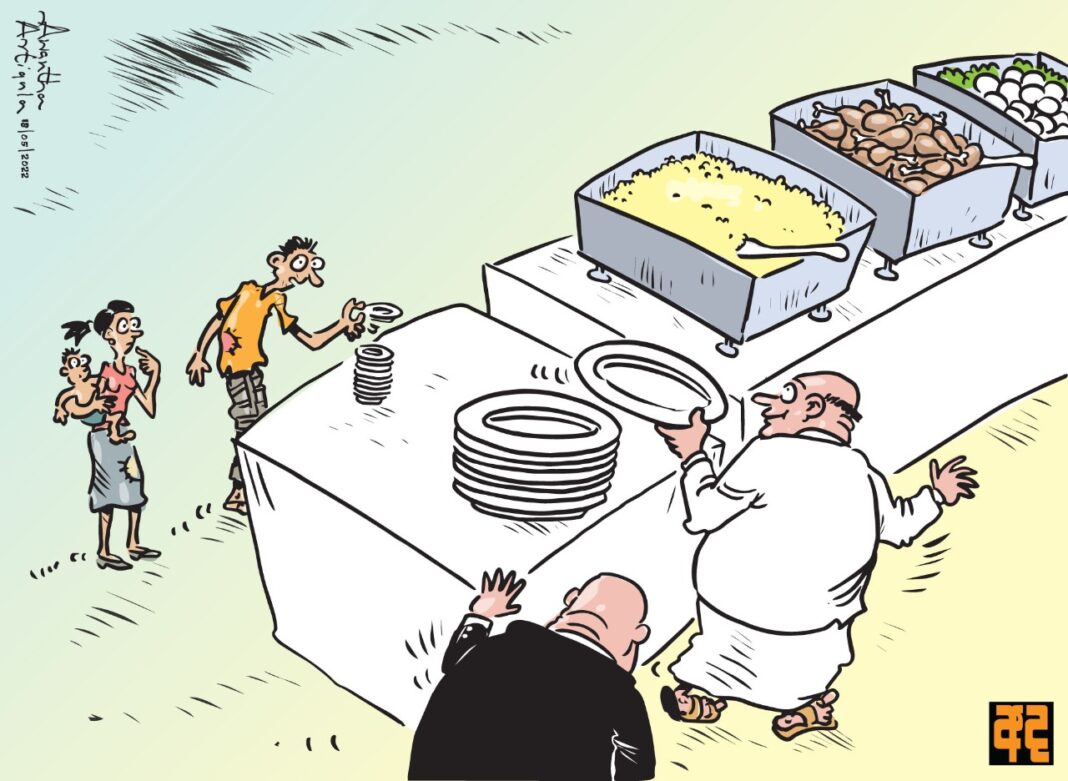 “After decades of conflict, political mismanagement, and unaddressed inequalities, the Sri Lankan people have made it clear they aspire for something better,” Durbin said.  “Introduction of this resolution shows that the U.S. Senate stands with peaceful democratic efforts to address these long neglected challenges.”

“I am proud to be joined by my colleagues in introducing our resolution that necessarily calls attention to the devastating political and economic turmoil plaguing the people of Sri Lanka,” Menendez said. “As the country grapples with its worst domestic crisis since the end of its civil war, the international community must continue to provide robust support and ensure that accountability for war crimes and respect for human rights in Sri Lanka remain top priorities. I applaud efforts by the Biden administration, our Quad partners, and the IMF in providing critical humanitarian and economic assistance, and affirm my commitment to continue to work with my colleagues to advance stability and prosperity in Sri Lanka and the broader region.”

“The Rajapaksa family enriched themselves at the expense of the Sri Lankan people, ruthlessly silencing their opponents, inciting ethnic tensions, and leaving the country an economic shambles,” Leahy said. “After years of civil war and government mismanagement and abuse, Sri Lanka needs a government that is committed to ethnic tolerance, equitable economic development, human rights, and justice.  That should also be the focus of U.S. policy.”

“The Sri Lankan people have sent a firm message that they want their government to address the dire economic and humanitarian crises that are afflicting their country,” Booker said. “I stand with the Sri Lankan people and support their peaceful efforts to address their needs. Furthermore, the international community must continue to push for justice, transparency, and accountability for human rights violations committed during the civil war to help the people of Sri Lanka move forward.”

117TH CONGRESS
2D SESSION S. RES. ll
Expressing the sense of the Senate in support of the peaceful democratic and economic aspirations of the Sri Lankan people.

IN THE SENATE OF THE UNITED STATES

Mr. MENENDEZ (for himself, Mr. DURBIN, Mr. LEAHY, and Mr. BOOKER) submitted the following resolution; which was referred to the Committee
on ———–

Expressing the sense of the Senate in support of the peaceful democratic and economic aspirations of the Sri Lankan people.

Whereas Sri Lanka gained its independence peacefully in 1948, bringing an end to British colonial rule;

Whereas, more than 100,000 Sri Lankans died or went missing in subsequent decades of ethnic conflict, most acutely at the end of the civil war in May 2009;

Whereas the roots of the conflict, including historical inequalities, remain largely unresolved;

Whereas the period of peace, which began in 2009, contributed to Sri Lanka’s high growth and economic development, building on a tourism-based economy;

Whereas Gotabaya Rajapaksa was elected as Sri Lanka’s President on November 16, 2019, and on November 21, 2019, he appointed his brother, Mahinda Rajapaksa, as Prime Minister;

Whereas on August 8, 2020, Human Rights Watch described President Rajapaksa’s rule in 2020 as ‘‘a campaign of fear and intimidation against human rights activists, journalists, lawyers, and others challenging government policy’’;

Whereas the Government of Sri Lanka declined $480,000,000 in United States assistance in 2020 in the form of a grant from the Millennium Challenge Corporation, which was designed to reduce poverty through economic growth;

Whereas, the Government of Sri Lanka, under the rule of President Rajapaksa—

Whereas, since 2019, Sri Lanka has faced an economic crisis, only further exacerbated by predatory loans from the People’s Republic of China as part of its debt trap diplomacy;

Whereas many Sri Lankans have immigrated in search of income to support their families as a result of the ongoing crises, often separating spouses and parents from children;

Whereas, beginning in March 2022, the citizens of Sri Lanka courageously exercised their fundamental freedoms of speech and assembly to peacefully protest the government’s failed economic policies and repression;

Whereas, the Government of Sri Lanka failed to make its bond and loan payments in April 2022, resulting in the country’s first financial default in May 2022;

Whereas tens of thousands of Sri Lankan citizens rallied in largely peaceful protests on July 9, 2022, to which the government responded with live fire and tear gas;

Whereas the events of July 9, 2022, demonstrated that President Gotabaya Rajapaksa has lost the confidence of the Sri Lankan people;

Whereas the current Government of Sri Lanka has thus far failed to respond to public concerns, including establishment of transparent investigations into credible allegations of corruption;

Whereas, on July 13, 2022, amid mounting public protests, Gotabaya Rajapaksa fled Sri Lanka for Singapore where he formally resigned as president, only to return to Sri
Lanka on September 3, 2022;

Whereas the Government of Sri Lanka has used the country’s Prevention of Terrorism Act to target peaceful political opposition;

Whereas the United States cosponsored United Nations Human Rights Council resolution, HRC 46/1 (2021), includes strengthening the capacity of the Office of the High Commissioner for Human Rights to collect, analyze, and preserve information and evidence for future accountability processes for gross violations of human rights in Sri Lanka;
Whereas the United Nations High Commissioner for Human Rights, Michelle Bachelet, issued a report on February 25, 2022, noting setbacks in efforts to hold individuals
accountable for human rights violations in Sri Lanka and highlighting the need for ‘‘deeper institutional and security sector reforms that will end impunity and prevent the recurrence of violations of the past’’;

Whereas the September 2022 Office of the High Commissioner for Human Rights Report on Sri Lanka stated, ‘‘[f]or sustainable improvements to take place, however, it is vital to recognize and address the underlying factors which have contributed to the economic crisis, including embedded impunity for past and present human rights violations, economic crimes, and endemic corruption’’;

Whereas the United Nations Human Rights Council will discuss the human rights situation in Sri Lanka at its upcoming 51st regular session in September 2022; and

(1) would restart bailout negotiations with the International Monetary Fund in August 2022; and
(2) had reached an initial agreement on September 1, 2022: Now, therefore, be it

1 Resolved, That the Senate—

(8) calls on the Quadrilateral Security Dialogue  nations to mobilize additional humanitarian assistance, provide desperately needed fuel, and offer eco4 nomic support and advice to the Government of Sri Lanka;
(9) urges the United Nations Human Rights  Council and the Government of Sri Lanka to implement the recommendations detailed in the United  Nations High Commissioner for Human Right’s report that was published on February 25, 2022; and
(10) calls on the United National Human  Rights Council to extend and reinforce the Office of  the High Commissioner for Human Rights’ mandate  from HRC 46/1 (2021) for an additional 2 years  and to fully resource the Sri Lanka Accountability Project.