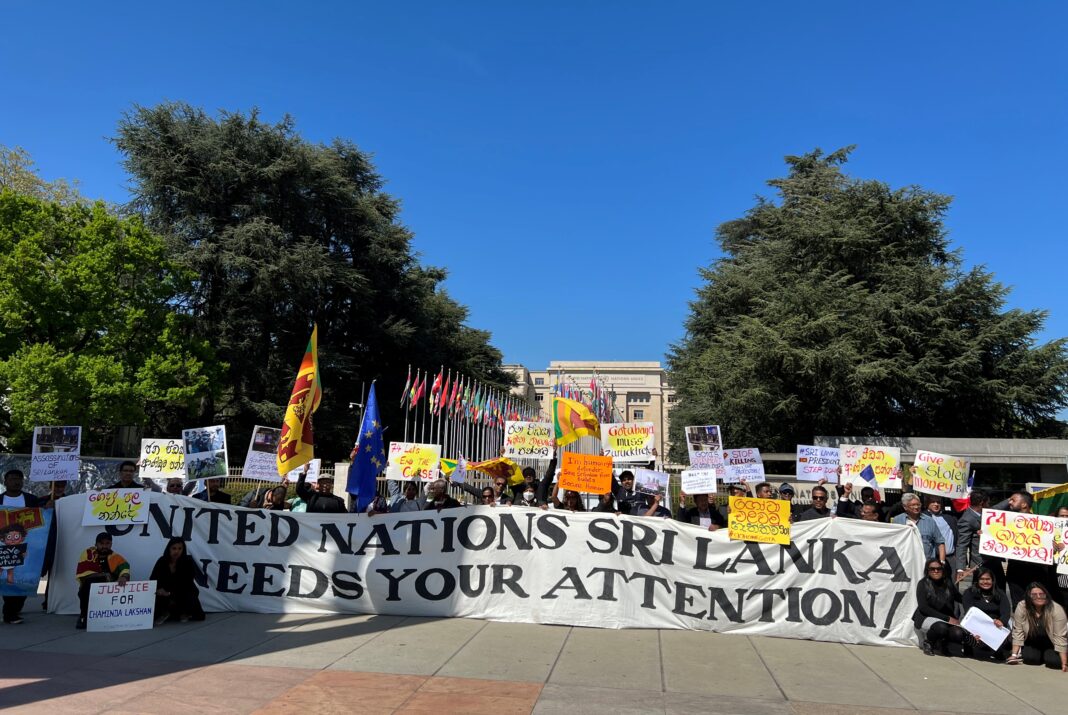 The draft resolution on Promoting reconciliation, accountability and human rights in Sri Lanka has been sponsored by 26 countries including  ten  Council members.

Guided by the purposes and principles of the Charter of the United Nations, reaffirming the Universal Declaration of Human Rights, and recalling the International Covenants on Human Rights and other relevant instruments,

Recalling further that, in its resolution S-11/1 of 27 May 2009, the Human Rights Council welcomed the resolve of Sri Lanka to begin a broader dialogue with all parties in order to seek a political settlement and to bring about lasting peace and development in Sri Lanka based on consensus among and respect for the rights of those from all ethnic and religious groups, and endorsed the joint communiqué of 26 May 2009 of the President of Sri Lanka and the Secretary-General, in which the Secretary-General, inter alia, underlined the importance of an accountability process for addressing violations of international humanitarian law and human rights law,

Reaffirming its commitment to the sovereignty, independence, unity and territorial integrity of Sri Lanka, Reaffirming also that it is the primary responsibility of each State to respect human rights and to ensure the full enjoyment of all human rights and fundamental freedoms by its entire population,* State not a member of the Human Rights Council.

Recognizing the severe economic crisis that has deteriorated in Sri Lanka since late 2021, exacerbated by the coronavirus disease (COVID-19) pandemic, and the profound impact that this has had on the people of Sri Lanka, including women-led households,

Underscoring the importance of addressing the underlying governance factors and root causes that have contributed to that crisis, including deepening militarization,
lack of accountability in governance and impunity for serious human rights violations and abuses, which remains a central obstacle to the rule of law, reconciliation and
sustainable peace and development in Sri Lanka,

Recognizing the recent efforts of the Government of Sri Lanka to address the on going economic crisis, and welcoming the staff-level agreement reached between the Government and the International Monetary Fund,

Emphasizing that peaceful protests can make a positive contribution to the development, strengthening and effectiveness of democratic systems and to democratic processes, including elections and referendums, as well as to the rule of law, and stressing the importance of full respect for the freedom to seek, receive and impart information, including the fundamental importance of access to information, and for democratic participation, transparency and accountability, and of combating corruption,

Acknowledging the stated commitment of the Government of Sri Lanka to constitutional reforms while stressing the importance of the independence of key commissions and institutions, including the Human Rights Commission of Sri Lanka, the Election Commission, the National Police Commission, the Judicial Service Commission and the
Commission to Investigate Allegations of Bribery or Corruption, and of the judiciary,

Reaffirming that all individuals in Sri Lanka are entitled to the full enjoyment of their human rights without distinction of any kind such as religion, belief or ethnic
origin, and the importance of a peaceful and unified land to the enjoyment of human rights,

Acknowledging the progress made by the Government of Sri Lanka in rebuilding infrastructure, demining, land return, facilitating the voluntary resettlement of internally displaced persons and improving livelihoods, and encouraging further efforts in these areas,

Welcoming the continued commitment of the Government of Sri Lanka to remain engaged with the United Nations and its agencies, including human rights mandates and mechanisms, in capacity building and technical assistance, and to achieve sustainable peace, Reaffirming its unequivocal condemnation of all acts, methods and practices of terrorism, including those committed in Sri Lanka in April 2019 that led to a large number of injuries and deaths, and reaffirming also that all measures taken to combat
terrorism must comply fully with States’ obligations under international law, in particular international human rights law, and, as applicable, international refugee law and international humanitarian law,

Emphasizing the importance of a comprehensive approach to dealing with the past, incorporating judicial and nonjudicial measures, to ensure accountability, to serve justice, toprovide remedies to victims, to avoid the recurrence of violations of human rights and to promote healing and reconciliation,

Recognizing that mechanisms to redress past abuses and violations work best when they are independent, impartial and transparent, and use consultative and participatory methods that include the views of all relevant stakeholders, including, but not limited to, victims, women, youth, representatives of various religions, ethnicities and geographic locations, as well as people from marginalized groups,

Noting with appreciation the work of the Office of the United Nations High Commissioner for Human Rights towards the promotion and protection of human rights and truth, justice, reconciliation and accountability in Sri Lanka,

2. Also welcomes the engagement of the Government of Sri Lanka with the Office of the High Commissioner and the special procedures of the Human Rights Council, encourages the continuation of such engagement and dialogue, and calls upon Sri Lanka to implement the recommendations made by the Office and to give due consideration to the recommendations made by the special procedures;

3. Expresses concern at the human rights impact of the economic crisis, including as a result of increased food insecurity, severe shortages in fuel, shortages in essential medicines and reductions in household incomes, while stressing the need to promote and protect the rights of the most marginalized and disadvantaged individuals, including daily wage earners, women, children, older persons and persons with disabilities;

4. Also expresses concern at other human rights developments since April 2022,including violence against and the arrests of peaceful protestors, as well as violence
against government supporters, resulting in deaths, injuries, destruction and damage to the houses ofmembers of Parliament, and stresses the importance of independent
investigations into all attacks and that those found responsible be held to account;

5. Stresses the importance of protecting civilian government functions from militarization and of addressing the independence of the judiciary and key institutions responsible for the promotion and protection of human rights and fundamental freedoms; the grievances and demands of Tamil and Muslim populations; prolonged internal displacement; land disputes; the surveillance, intimidation and harassment of journalists, civil society activists, human rights defenders, families of disappeared persons, and persons involved in memorialization initiatives; and of combating sexual and genderbased violence;

6. Also stresses the importance of a comprehensive accountability process for all violations and abuses of human rights committed in Sri Lanka by all parties, including those abuses by the Liberation Tigers of Tamil Eelam;

7. Notes the persistent lack of independent, impartial, and transparent domestic mechanisms, and stresses the importance of ensuring investigations and, as applicable, appropriate punishments for allegations relating to grave violations of human rights;

8. Recognizes the importance of preserving and analysing evidence relating to violations and abuses of human rights and related crimes in Sri Lanka with a view to advancing accountability, and decides to extend and reinforce the capacity of the Office of 1 A/HRC/51/5. the High Commissioner to collect, consolidate, analyse and preserve information and evidence and to develop possible strategies for future accountability processes for gross violations of human rights or serious violations of international humanitarian law in Sri Lanka, to advocate for victims and survivors, and to support relevant judicial and other proceedings, including in Member States, with competent jurisdiction;

9. Notes the initial outreach of the Government of Sri Lanka to overseas persons of Sri Lankan origin encompassing all communities and generations, and encourages the Government to engage further in a broad-based consultative process with stakeholders from all affected communities and to provide remedies to achieve meaningful reconciliation, devolution of political authority, an improved situation of human rights, and lasting peace;

10. Urges the Government of Sri Lanka to foster freedom of religion or belief and pluralism by promoting the ability of all religious communities to manifest their religion, and to contribute openly and on an equal footing to society;

11. Also urges the Government of Sri Lanka to take measures to address the marginalization of and discrimination against persons from the Muslim community, and
to ensure that Muslims and members of other religions are able to continue to practice their own religious rites, including burial rites;

12. Calls upon the Government of Sri Lanka to ensure the prompt, thorough and impartial investigation and, if warranted, prosecution of all alleged crimes relating to human rights violations and serious violations of international humanitarian law, including for long-standing emblematic cases, with the full participation of victims and their representatives;

13. Also calls upon the Government of Sri Lanka to address the ongoing economic crisis, including by investigating and, where warranted, prosecuting corruption, including where committed by public and former public officials, and stands ready to assist and support independent, impartial and transparent efforts in this regard;

15. Calls upon the Government of Sri Lanka to protect civil society actors, including human rights defenders, to investigate any attacks and to ensure a safe and en
abling environment in which civil society can operate free from hindrance, surveillance, insecurityand threat of reprisals;

16. Notes the introduction in March 2022 of amendments to the Prevention of Terrorism Act, that detentions under that law continue, and the expressed intention
of the Government of Sri Lanka in this regard to introduce new legislation on combating terrorism, and encourages the Government to engage in consultations with civil society, the Office of the High Commissioner and relevant special procedure mandate holders in the preparation of new legislation, in order to ensure that any legislation on combating terrorism complies fully with the State’s obligations arising from international human rights law and international humanitarian law;

17. Notes with appreciation the continued engagement of the Government of Sri Lanka with the special procedures of the Human Rights Council, and encourages the Government to continue that cooperation, including by responding formally to outstanding requests from them;

18. Encourages the Office of the High Commissioner and relevant special procedure mandate holders to provide, in consultation with and with the concurrence of the Government of Sri Lanka, advice and technical assistance on implementing the above- mentioned steps;

19. Requests the Office of the High Commissioner to enhance its monitoring and reporting on the situation of human rights in Sri Lanka, including on progress in
reconciliation and accountability, and on the impact of the economic crisis and corruption on hman rights, and to present an oral update to the Human Rights Council at its fiftythird and fifty-fifth sessions, and a written update at its fifty fourth session and a comprehensive report that includes further options for advancing accountability at its fifty-seventh session, both to be discussed in the context of an interactive dialogue.