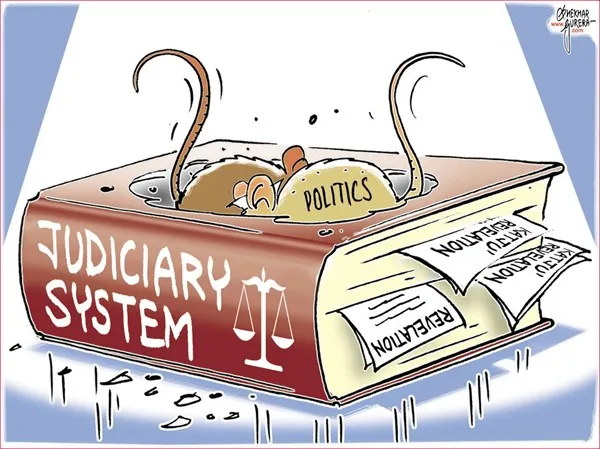 Cartoon from internet and does not related to the article.

Removal of the PM

The demand for abolishing ‘Executive Presidency’

The Supreme Court (Jayasuriya CJ, Aluwihare J and Obeysekere J) has determined that several key provisions of 22A require the approval of the people, at a referendum, in addition to a two-thirds majority, in Parliament. They are as follows: the President should not have the power to dismiss the Prime Minister; Ministers shall be appointed by the President on the advice of the Prime Minister; and that if the President does not make appointments to the independent Commissions, as recommended by the Constitutional Council, within 14 days, the appointments would be deemed to have been made.

Rejection of the 19 A

These three provisions were part of the Constitution, under 19A. The Supreme Court, in 2015, did not consider that they would require approval, by the people, at a referendum. There is thus a clear shift in the thinking of the current Supreme Court. The government has said that a referendum will be avoided by amending the Bill at the committee stage in Parliament. Thus, the President would only be required to consult the Prime Minister in appointing Ministers. The President can dismiss a Prime Minister even when the latter has a clear majority in Parliament. Premier Dinesh Gunawardena, beware!

Appointment and removal of PM

To the writer, the decision of the Supreme Court in the matter of appointing Ministers did not come as a surprise, given the reasoning of the Court (Jayasuriya CJ, Janak De Silva J and Obeysekere J) in its determination of the Samagi Jana Balavegaya’s Twenty-first Amendment to the Constitution Bill (21A), holding that the abolition of the Executive Presidency required people’s approval, at a referendum. The writer disagrees with that determination, which will be the subject of a forthcoming paper. But the determination in the 22A case that the President’s power to dismiss a Prime Minister, who commands the confidence of Parliament, is an essential part of executive power, did come as a surprise.

“It is respectfully submitted that the learned Judges were in error in both the 20A and 22A cases. Both 19A and 20A had a similar provision, relating to the appointment of the Prime Minister”

The 20A Bill sought to empower the President to remove the Prime Minister. The proposed provision was challenged. A five-member Bench of the Supreme Court, however, held that in view of the fact that the President, who holds the People’s executive power in trust for the People, is the Head of the Cabinet of Ministers and the appointing authority of the Prime Minister, empowering the President to remove the Prime Minister and appoint a new Prime Minister who, in his opinion, commands the confidence of Parliament, does not infringe the sovereignty of the People. The Court did not explicitly state that such a power of removal is an essential part of executive power but seems to have gone on the basis that the appointing authority also has the power of removal.

22A sought to remedy this situation, as 19A did, by taking away the power of the President to remove the Prime Minister.