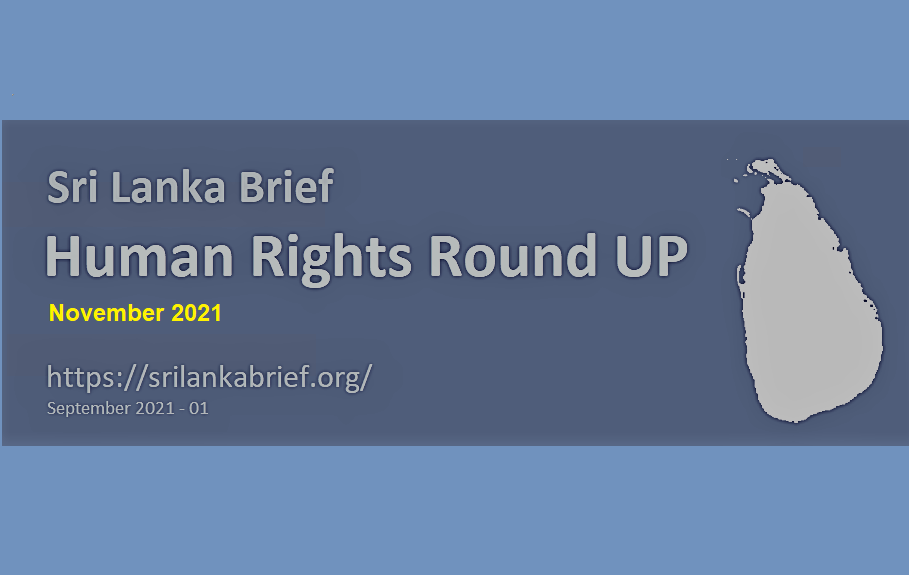 02 November:  Father Cyril Gamini filed a fundamental rights petition in the Supreme Court seeking an interim injunction against the Criminal Investigation Department (CID) to prevent attempt to arrest him. Director of State Intelligence Service, Major General Suresh Sallay on October 25 lodged a complaint with the Criminal Investigations Department (CID) against, Father Cyril Gamini over several malicious allegations purportedly made by the priest and others in connection with the Easter Sunday attack in 2019. Fr. Cyril Gamini has strongly denied the accusations and has produced a recording of his speech made at the webnar.

09 November: Government issued new regulations by way of Gazette (Extraordinary) No. 2253/10 to limit the size of public gatherings and make it mandatory to obtain prior approval of Director General of Health Services to hold gatherings, activities, events or similar places of meetings.

12 November: In his Budget speech. Minister of Finance Basil Rajapaksa levelled a serious allegation against social activists in Sri Lanka: “Forces Detrimental to the Country- Hon. Speaker, similarly, agents of foreign powers disguised as social activists are exerting considerable pressure on our society to the extent that, today, such so called activism can overthrow strong and populist governments. It is not possible for a government alone to manage. Therefore, I invite all citizens of this country as responsible citizens to be vigilant about this situation.” (Hansard 12 Nov pg158-159)

15 November: Fr Cyril Gamini was questioned 7 hours by the CID of the Sri Lanka police over the complaint made by head of State Intelligence Service Major General Suresh Sallay. This questioning is seen by a way of intimidation against critical questioning of investigations related to Easter Sunday Attacks. He was further questioned on 16 and 22nd November.  For unanswered  questions on Easter Sunday Attacks see here.

15 November: Ahnaf Jazeem, a teacher and poet, was indicted under the Prevention of Terrorism Act after being jailed for 18 months. The Attorney General’s Department and the Counter Terrorism Investigation Division jointly filed the charges. The case is being heard in the Puttalam High Court. Next court date is 15 December 2021. AG has indicated that he will not oppose giving bail to Ahnaf Jazeem.

20 November: In a circular issued by State Ministry of Home Affairs, public servants were warned not  to  criticise the Government and its policies through social media platforms. They have been warned of disciplinary action if they violate the directive.

23 November: Journalists, Abdul Salam Mohammad Yasim, provincial correspondent for Thinakaran (Lake House), H.S.M. Halaldeen, Shakthi/News First correspondent and A.L. M Rafaideen, Thinakaran staff reporter, had been assaulted by a group purporting to be the ‘enraged public’ while they were covering a ferry accident in Kinniya, Trincomalee, that took the lives of six people.

27 November: Freelance journalist Vishwalingam Vishwachandran of Mullaittivu was assaulted by three army personal While he was taking a photograph of a Mullivaikkal road sign. Later Sri Lanka Army issued a statement denying the assault and blaming journalists for seeking asylum in greener pastures, who are well poised to tarnish the image of the Security Forces in the North and East.

30 November: The Sri Lankan soldiers who attacked a Tamil journalist, Vishvalingam Vishvachandran, in Mullivaikkal during Maaveerar Naal  have confessed to committing the assault and apologised to the victim. The apology was tendered in the presence of Crime Prevention Department officials of following which the soldiers were released with the consent of Vishvachandran, the complainant. This was contradicts the statement issue by the SL Army.

04 November: Deputy Chairman of the Mawanella Pradesheeya Sabha and two other councillors assaulted a parent demonstrating in support of the teachers and principals. Parents were demonstrating opposite many schools across the country asking the government to resolve the long-standing salary anomalies of teachers and principals. After a massive protest by teachers against the assault they were arrested and given bail.

16 November: Sri Lanka police used spiks to stop buses carrying SJB supporters to attend the protest rally in Colombo. In many areas including  Kandy, SJB supporters were stopped from traveling in their buses.

23 November: Valaichenai Magistrate Court issued an order extending the remand of 10 Tamil men and women who were arrested earlier this year under the Prevention of Terrorism Act (PTA). The group was arrested on 18 May 2021, for holding a vigil to mark “Tamil Genocide Day” and commemorate the Tamils died at the end of the armed conflict in 2009. They were released on bail on 08 December 2021.

27 November: In Mullaitivu,  police officers arrested ITAK youth member Peter Ilancheliyan, after they manhandled both him and his wife as they attempted to hold commemorations. Armed soldiers continued to patrol the area on motorbikes, whilst other troops photographed the 100 or so Tamils that had gathered there to mark ‘Maaveerar Naal’.

27 November: Soldiers disrupted services at the St Joseph Church in Koolamurippu in the evening, blocking entry to the shrine and telling worshippers and the priests to move the service to another day because it could not be held  that day. Police were also called and after clarifying that there was no ban on prayers, worshippers demanded that the soldiers surrounding the church disperse before the service could begin. The service eventually commenced, over one hour after the scheduled time

02 November: Issuing a statement on the appointment of by the Presidential Task Force for One Country, One Law the Bar Association of Sri Lanka stated that no useful purpose would be served by the Task Force. “Task Force would usurp the functions of many institutions established under the Constitution and the law, including Parliament and the Ministry of Justice.” noted the statement.

02 November:  A video footage of Senior Deputy Inspector of Police Ranmal Kodithuwakku assaulting a driver on the road was widely shared on social media. The victim Mishara Ranasinghe claimed that after the assault he was taken to the Kiriella Police Station and was tortured inside a room. The law firm Neelakandan and Neelakandan in a detailed letter requested PM Rajapaksa to direct relevant authorities to appoint and conduct an independent and impartial inquiry to identify legal action and punish all those perpetrators. But only action taken was to transfer him as the Senior DIG of the Medical Services and Welfare Division.

14 November: A second autopsy on a Tamil youth from Batticaloa who was arrested Sri Lankan police and died in custody  has  revealed signs of  torture. On 2 June 2021 Chandran Vithusan, 22, was picked up by the Intelligence officers who hit him using poles. The next morning. Vithusan’s dead body was handed over by the officials. The officials declared that Vithusan had died of an illness and the first post-mortem report has said that he had died of a drug overdose and didn’t mention any signs of torture.

19 November: President Gotabaya Rajapaksa issued an extraordinary gazette calling out with effect from November 22, 2021, all the members of the Armed Forces for the maintenance of public order in all administrative districts of Sri Lanka. This emergency measure has become a new normal under President Rajapaksa and he  has continued the praactice since his inauguration in November 2020.

25 November: H.L. Lasantha alias Tinkering Lasantha who was arrested by the Kaluthra police was killed on the early morning  next day in a fake encounter. Issuing a statement on the extrajudicial killing of H.L. Lasantha alias Tinkering Lasantha Sri Lanka Bar Association said that they had informed the Inspector General of Police of the complaint received form his lawyer. The lawyer, Sanjaya Ariyadasa has informed the BASL president that his client will be killed in custody by the police.

27 November: After nearly 4 weeks of inaction by the government on the torture inflicted on Mishara Ranasinghe by Senior DIG Ranmal Kodithuwakku, he filed a Fundamental Rights application at the Supreme Court. The victim Mishara Ranasinghe is seeking an order directing the Attorney General to institute action against five police officers including Senior DIG for their illegal conduct under and in terms of the Penal Code and Torture Act.

29 November: Foreign Minister Prof G L Peiris has told NGO group “Sri Lankan Collective for Consensus (SLCC)” that the Prevention of Terrorism Act (PTA) will not be repealed but some changes will be introduced in early 2022. Sri Lanka has promised the international community that PTA will be replaced with a new act in accidence with international best practices.