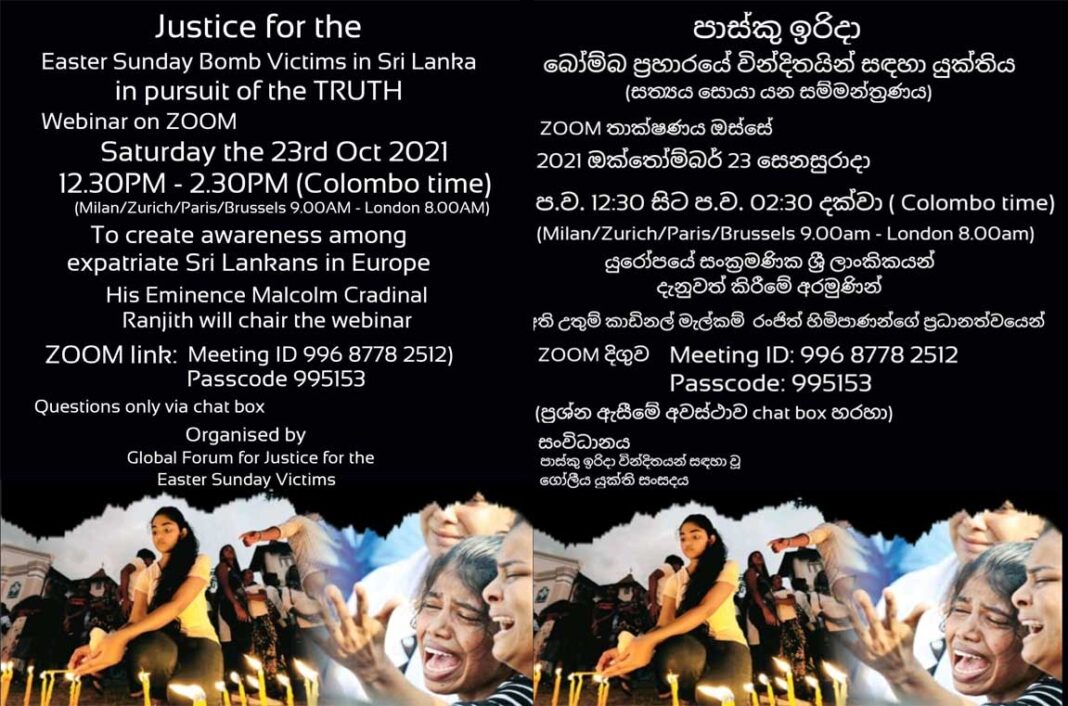 Image: Major General Suresh Salley has complained to the CID that Fr. Cyril Gamini  has  defamed him in a webinar held on 23.10.2019.

Filing a  Fundamental Rights application  requesting to issue a order staying the respondents 1-4 arresting the himself until the final determination his application, Rev. Fr. Cyril Gamini Fernando has refuted the allegation levelled against him by Major General Suresh Salley.

Respondents  1-4 named in the petition are

Major General Suresh Salley has complained to the CID that Fr. Cyril Gamini  has  defamed him in a webinar held on 23.10.2019. The webinar was organised by a group called  “Justice for the Easter Sunday Bomb Victims in Sri Lanka in Pursuit of the Truth” based in Europe.

The statement in question has been made as a answer to a question posed during the webinar.

Relevant section of the petition:

39. The Petitioner states that in the aforesaid answer, he questioned the failure on the
part of the Police and the Intelligence Service that operated in Kattankudy to bring
the members of the extremist group called Thoweed Jamath operating in that area
who were, preaching extremism, committing atrocities against the Sufi Muslims and
committing crime but he did not refer in particular to the then Brigadier Suresh
Salley, the 5th Respondent abovenamed, who was attached to the Directorate of
Military Intelligence.

41. The Petitioner states he thereafter learned from various news broadcasts on
27.10.2021 that the CID has already reported facts to the Chief Magistrates Court,
Colombo.

42. The Petitioner states as defamation is not a criminal offence in Sri Lanka now, the Petitioner with the hope of obtaining legal advice, by letter dated 27.10.2021
informed the 1st Respondent abovenamed on 28.10.2021 that he requires time to
obtain legal advice.

43. The Petitioner states as the 1st Respondent abovenamed has already reported facts to
Court as aforesaid, the Petitioner through his Attorney-at-law, filed a motion on 29.10.2021 applying for a certified copy of the case record of the said case bearing No. MC Colombo B58615/01/2021.
The Petitioner annexes hereto a certified copy of the said case record marked “P10” in
which the B-report dated 27.10.2021 is marked “P10(a)” and plead same as part and
parcel of this application.

45. The Petitioner states although “P8” states that the Petitioner has only defamed the
5th Respondent abovenamed during the said webinar (zoom discussion), “P10(a)”
indicates that the 5th Respondent abovenamed has made a written complaint on
25.10.2021 alleging, inter alia;
i. caused prejudice to the National Security
ii. caused a prejudice to the 5th Respondent abovenamed
iii. committed offences under Sections 120, 128, 484 and 485 of the Penal Code
and Section 3(1) and 3(2) of the International Covenant on Civil and Political
Rights (ICCPR) Act No.56 of 2007,
iv. advocated national, racial and religious hatred that constitutes incitement to
discrimination, hostility and violence

by participating in the said webinar (Zoom discussion) organized by “Global Forum
for Justice for Victims of Easter Sunday” on 23.10.2021 to create awareness amongst
the local and international community and that the CID is also investigating whether
the Petitioner has committed an offence under Victim and Witness Protection Act No.
04 of 2015 since the 5th Respondent abovenamed, has testified before the said
Commission of Inquiry.

The Supreme Court of Sri Lanka will hear the FR Petition filed by Fr Cyril Gamini requesting for an order to be issued preventing his arrest on November 08.