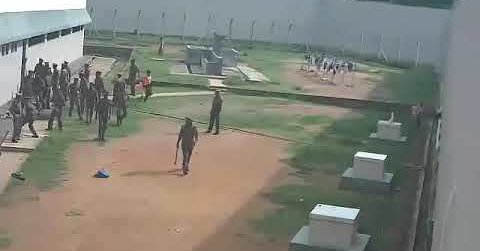 On 16th January 2019,leaked video footage was released to the media, showing brutal and systematic assault on detainees at the Angunakolapalessa prison in the Southern Province in Sri Lanka. The attack was carried out mostly by uniformed prison staff, while the Superintendent of the Prison was also alleged to have participated and directed the assault.

The Committee for Protecting Rights of Prisoners (CPRP), which had received the leaked video footage and released it to the media, had made complaints to the Criminal Investigation Department (CID) of the Police, the Human Rights Commission of Sri Lanka (HRCSL) and also to the United Nations.

The Minister has claimed that information on the incident only came to light after the release of the video, however the Human Rights Commission, through a public statement , has confirmed that it had been made aware of the incident prior to the release of the video and that it had already visited the prison, obtained statements from prisoners, requested the Superintendent of the Prison to produce those who allege having been assaulted to be examined by the Judicial Medical Officer (JMO) and provide medical assistance to inmates who required such assistance. The Commission also undertook follow up visits and summoned the Commissioner-General of Prisons and the Superintendent of Angunakolapalessa Prison for inquiries.

As of 29th January 2018, no information is available about the results of the investigation by the Commission or the two committees appointed by the Minister.

And detainees who were attacked remain under control and mercy of the attackers with no means of escaping their wrath.

But Sri Lankan prisons are notorious for torture, cruel, inhuman and degrading treatment as well as corruption, with female detainees being attacked for demanding sanitary pads late last year. In 2012, 27 inmates were massacred and prior to this, there have been several massacres inside the prison, with total impunity for perpetrators.

We call for the:

i.  Immediate suspension of the Superintendent and all those prison department staff who were on duty at the time and day of the incident

ii.  Guarantees of safety and non-reprisals to all detainees, especially those who have given statements and may do so in future

iii.  Guarantees of safety and non-reprisals other eyewitnesses and those who leaked the video footage and those publicizing it

iv.   Preservation of all relevant evidence, in particular, in relation to the video footage in a manner that they could be used for prosecutions

v.    Involvement of independent persons with professional expertise and experience to assist in the investigations

vi.   Expediting the investigations and publications of results by the Human Rights Commission, Department of Prisons and Ministry of Justice

vii.  Expediting the investigations by the Criminal Investigation Department (CID) of the police and quick prosecution and conviction of perpetrators under the Torture Act

viii.  Increased and regular independent monitoring and reporting on the conditions inside prisons in Sri Lanka