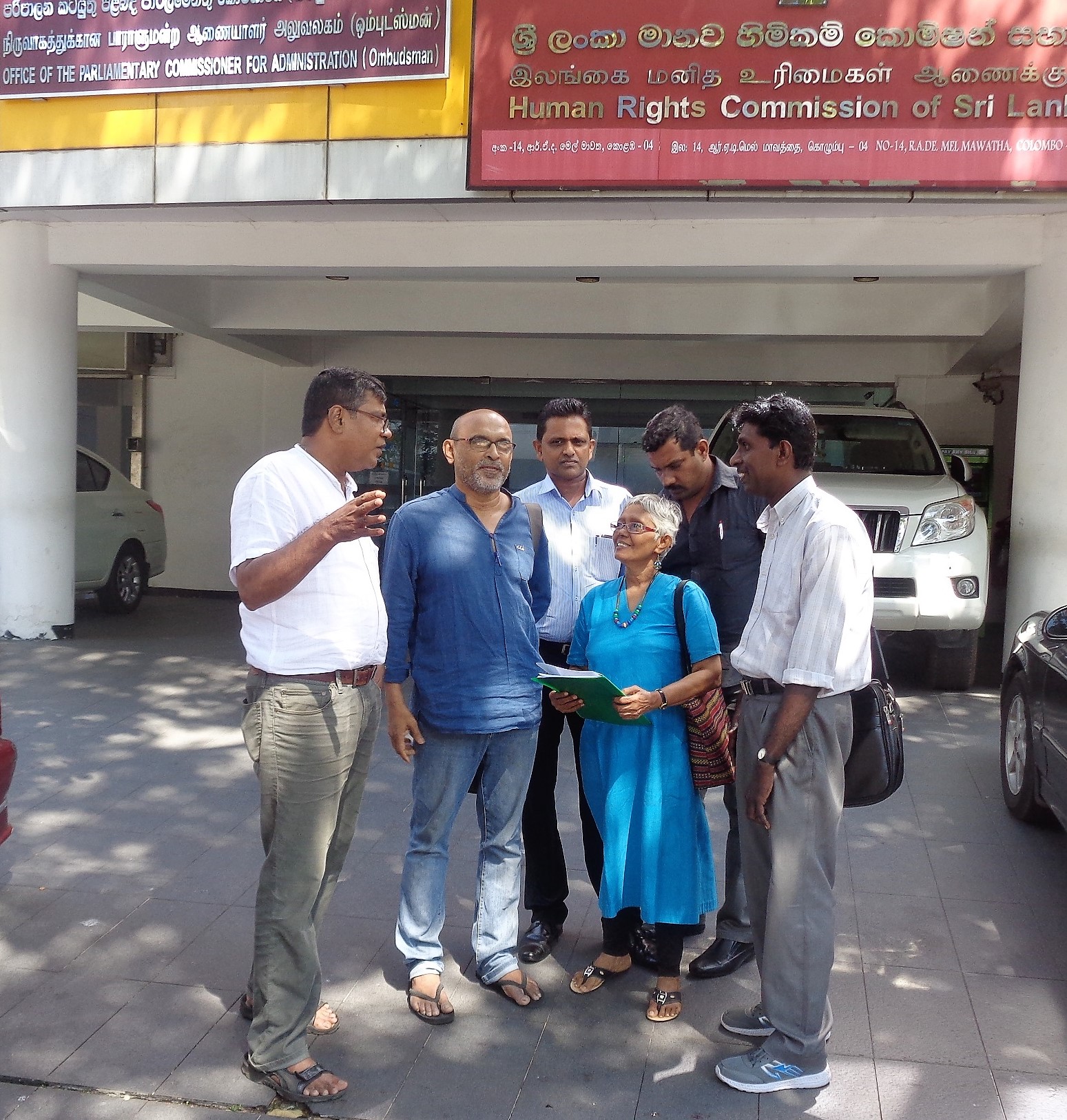 She stated this when she met the executive committee members of the Free Media Movement on Tuesday (29), who requested her to mediate to take suitable action to grant justice to journalists and media institutes that came under attack.

Complaints to the police, eyewitness accounts and information regarding the slain and assaulted media personnel play an important role in meting out justice in these cases, and if the police has not taken action on the complaints made, the Commission can take action in these instances, the Chairperson said.

The FMM handed over a comprehensive report indicating instances where Killings, Assault and Disappearances of Journalists and Media Institutes have taken place without any action being taken against such incidents. We request all civic minded parties to provide any information pertaining to Killings, Assault and Disappearances of Media Personnel to [email protected] or to,  Convener, Free Media Movement, No 96, Bernard Soysa Mawatha, Narahenpita, Colombo 5.Sri Lanka.

The complaint made by the Free Media Movement to the Human Rights Commission has been directed through this channel.

The letter handed over by FMM follows:

Sri Lankan experience in ensuring justice for crimes against journalists and media institutions has been tragic. We, the Free Media Movement, strongly believes that you are completely aware of this unsatisfactory circumstances. The Free Media Movement and citizens who value justice and human rights, repent this failure and negligence in ensuring justice to these victimized journalists and media institutions.

Under these circumstances the FMM carried out a detailed study on crimes against journalists and media institutions that has taken place from year 2000 to 2015 for engaging in their professional work. The research unearthed a massive stock of information, yet most depressing is to observe lack of records for some of these incidents. For example some crimesthat has taken place in the North, lack police complaints filed.

Even though a number of media workers also got subjected to crimes, theFMM for its initial study selected 30 incidents that represent the FMM, journalists and media institutions. It can be observed that the freedom of expression guaranteed under the Constitution, the freedom of holding an opinion or belief, the right to access to justice, equality, fundamental rights and the right to live were severelyviolated. FMM believes that if this trend gets allowed to continue, in the absence of a proper solution, it will be a irreparable threat on human rights, in its entirety.

With this we,the FMM presents a summary of the findings of the survey requesting the Human Rights Commission of Sri Lanka to progressively intervene in creating a conducive non-violent environment for journalists and for the freedom of expression in Sri Lanka.

The FMM study covered the period fromyear 2000 to 2015, taking into consideration 30 incidents representing different parts of the country, different surroundings and various sections of the media. The following table gives a summary of the incidents.

Further details about the above incidents are attached as annexure 01.

A study on the incidents separately reveals that so far none of the suspected perpetrators has been punished by the Sri Lankan judiciary. As observed court cases for incidents such as murder of LasanthaWickrematunga and missing of PrageethEkneligoda, has shown slow progress. Yet in the majority of cases are documented under category ‘C’ claiming information on perpetrators can not be traced.

We have identified the following reasons for the failure to ensure justice and continuity of impunity practices.

The father and sister of journalist Subramaniam Ramachandran who disappeared had gone to army camps regularly looking for him. Thereafter they had met MP Douglas Devananda, politician from the Northern Provinceand made inquiries. He has threatened them saying that they would face the same fate and there after Ramachandran’s family stopped the search fearing for their lives.

(The incident where former Minister Mervyn Silva and his guards stormed the Sri Lanka Rupavahini and assaulted News Director T.M.G.Chandrasekara was broadcast live and the victims complained giving names of those responsible, but no investigation was held.)

(Sandya Priyangani Eknaligoda, the wife of missing journalist Prageeth Eknaligoda, tirelessly carried her campaign for nine long years with the support of CSOs seeking justice for her husband, yet investigations are processed extremely slow.)

2. The delay in the judicial system and failures of the legal structure

It is noted through observing the ongoing investigations on crimes against journalists that piling up of cases in magistrate courts due to court delays has led to delay in justice for the victimized journalists.

3. Lack of Political will

4. The link between the armed forces and the para-military groups

5. The lack of a powerful contribution from the civil society and media consumers to end impunity and ensure justice.

6. The insufficient intervention from media ownership to ensure justice.

Annexure 01:Summary of Crimes committed against Journalists and Media Institutions 2000 – 20151

Notes: 1) During the period (2000 – 2015) a large number ofMedia people have been subjected to crime. This is collection of data is of 30 selected incidents

targeting journalists and media institutions for which legal actions have been instituted.

2)The attached media is decided on the basis the popular identification of the media, the Journalist engaged.

3)Here persons mentioned as suspected criminals are based on the information received from the victims and other related sources.

5)A government minister has been involved in the attack with the security forces.