When the Govt.refuses rights to the Provincial Council, how on earth can we live in peace ?- Tamil Chief Minister C. V. Wigneswaran 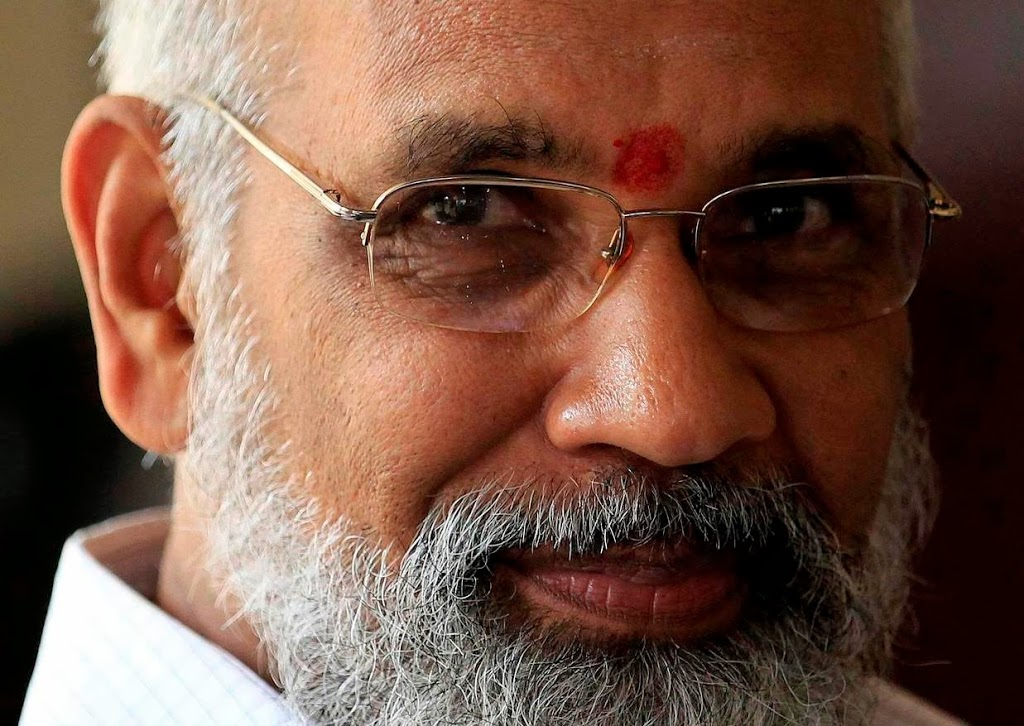 Interviewd by Nilantha Ilangamuawa
Geneva
Firstly politics is done by our Parliamentary Members. They are the real politicians. I have come more or less as an Administrator. So Parliamentarians are due to attend. We have simply endorsed Ananthy as the most suitable person to attend if she could make it.
Secondly, the Countries that attend Geneva are interested in adequate proofs for them to take a stand one way or the other. Ananthy gave evidence quite boldly before LLRC, Navi Pillay and recently before the Paranagama Commission.
In fact it was she who brought to our notice that ‘persons’ in civil clothes were preventing people who came to Kilinochchi from giving evidence and even weaning away such persons on promises of compensation for the loss of their dear ones. We felt she would be in a position to give a first-hand account of the problems faced and currently being faced by our people, boldly and pointedly.

Thirdly, it was our women who lost the most by this war and who are most vulnerable even today. They needed someone who could empathise with their views. Ananthy, we thought, fitted in well.

If TNA does not want me
There is an easy way to get rid of me ( if some one in the TA wants to) . Just call up the TNA for a special general meeting and pass a resolution that you do not want Wigneswaran as Chief Minister or even as a member. Within seconds of your passing such a resolution I will be travelling back to Colombo. But if you can’t do that please try to help me to carry this burden.’ Remember one thing. I am a Lawyer. I have accepted a brief. None other than my client could ask me to hand back my brief. The TNA is my client more or less, as the trustees of the people of the Northern Province. I will work for them so long as they want me.

My life outside politics is fulfilling and far less stressful. I came into politics because the TNA felt I would be useful. If they feel that I am no longer useful I am happy to leave. Politics does not give me any personal benefit. Therefore I do not have to tackle the problem you speak about.

The Militarisation – President’s 12,000!
As for the military check points and camps, no doubt, there has been a reduction after Major General Udaya Perera took over. But he is an excellent professional soldier. He must also be from Army Intelligence! Because at every place where the check points vanished you could now see soldiers on bicycles moving around. In that sense the people still feel insecure. There is no let up on treating the Northern Province as occupied territory. What we Tamils want is the complete withdrawal of the Army and the taking over of Intelligence and Security by the civilian Police. Of course, we have no objections to a few units of a limited number of Army personnel being kept in strategic places like ports and harbours.

I have responded to the statement made by the President ( that there only 12,000 army personal in the North)  in my recent keynote address at a conference organised by the University Grants Commission. I pointed out that almost immediately after the President made that statement about the number of soldiers presently occupying the Northern Province, it was contradicted by the Secretary to the President, and that the troop levels were five times more than what the President indicated. Perhaps, the President had been misinformed. Let us approach the issue with transparency and frank discussion, which focuses on upholding democratic freedoms and national security.

Federal system Vs Executive Presidency
When we brought out our report somewhat like a manifesto before the NPC election, we specifically said that we need to change the system constitutionally. We were for a federal constitution which is quite in contrast to the unitary constitution presently prevailing. In other words we were for a system, whether labeled federal or otherwise, which ensured maximum devolution to the North and the East, within a united Sri Lanka.

Muslims and Sinhalese in the North
People who have been forcibly evicted should be resettled. However, resettlement should be for genuine displaced persons and should not be used as a ruse for forced demographic change. Unless those who now claim the right to come back could prove their connection to the original inhabitants they must be persons brought in for colonization purposes, promoted by the Government or by certain ultra-Sinhala Nationalist institutions.

Regarding the Muslims we intend setting up an institution very soon to address their issues. We have clearly indicated in our Manifesto that the Muslims who were evicted should be resettled in their lands. The People have given their mandate to proceed with this. We consider this our duty. However, this does not mean we are unaware of a Muslim Parliamentarian who is also trying to bring in outsiders to further his own political interests.

Regarding the Sinhalese the elders here could easily identify where the Sinhalese lived and who they were. They were such a minuscule minority. For example the person who sold bread to us at Manipay when I was very young was an Appuhamy from Matara. He was so loving and spoke Tamil so much like a Jaffna Man. If the new claimants could show their connections to such persons why not resettle them? But the persons coming in are generally not the descendants of those who lived here. They are people brought in with the sole idea of changing the demographic pattern of the North.

Fate of Southern Tamils
Don’t forget that Tamils lived in the South too. There is a Temple Trust in Matara which owns properties even now strictly according to law because Prescription does not run against Trusts. The Trustee was Mr. Krishnadasan, Retired Commissioner of Assize. You think the encroachers will hand over the properties back to the descendants of the Judge or the successors to the Trustees? I think they tried and failed. You may not know that one Mr. Pasupathy and his brother owned around half the paddy lands in Tissamaharama in the 1950s and early ‘60s. Everything was destroyed by hooligans during riots and their descendants have no chance of going back there. The planned driving away of the Tamils from the South was the modus operandi of successive Sri Lankan governments. Now they want to colonise the North and drive away even those left in their areas of traditional occupation. But we will not follow that path – we will follow the law and address all genuine cases in accordance with the Law.

If (the govt/Sinhalese) allow us to live in peace in the North we will no doubt live in peace. When there is rewriting of history in a partisan manner, when there is planned colonisation to change the demography of the Northern Province, when you have an occupational Army in place in the North interfering with all aspects of daily life of the people, when the govt  refuse to grant rights already in the law to run our Provincial Council, how on earth can we live in peace?

Tamils outside the North and East have also been subject to pogroms and untold horrors. 1983 was merely the worst. Even afterwards there have been massacres in Bindunuwewa and other areas. The religious extremism that is currently being given a free hand in the South and West. Muslims, Christians and Hindus have all been targeted, attacked and intimidated

We need to focus on morality as well as intellectual arguments to change people’s mindsets. The moral arguments could be buttressed by having recourse to our respective spiritual roots. This means rejecting extremist views and enshrining pluralist values. On the intellectual side we need to explain the rational basis for mutual respect. This has to be a priority. The Government should use the immense control it has over the media to achieve this as a first step. I recall that during the Peace Process there were a lot of people from the South who were supportive. This was due to the fact that the official policy of the government was different. The bottom line is that it needs the political will and commitment of the powers that be.

Last word
I like to take the Sinhala masses into my confidence. They  have been fed with many negative particulars about the Tamils by certain sections of the politicians and the press so far. Try to probe into the truth of such particulars. On inquiry you might find the situation is not as bad as it was portrayed by various interest groups. The moment you come out of your prejudices and conditionings there is every chance that we could work out a durable solution to our problems. The Tamil Speaking Peoples have given a very clear mandate – they eschew violence and support a political solution within a united Sri Lanka. They love this country as much as you do. What they seek is human security, fundamental freedoms and the right to manage their affairs in their areas of traditional habitation.