‘We will not allow an external probe’- President Rajapaksa 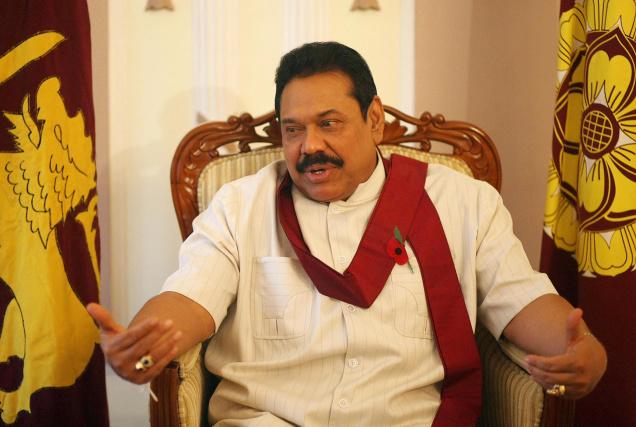 Sri Lanka’s President Mahinda Rajapaksa faces the twin challenges of external pressure for an international probe into allegations of war crimes and internal pressure over the dialogue process with the Tamil National Alliance. In his first interview since meeting Prime Minister Narendra Modi in May, he spoke to Suhasini Haidar about the UNHRC resolution and the possibility of restarting dialogue.

Tell us what you think the Sri Lankan-appointed Lessons Learnt and Reconciliation Commisson (LLRC) has achieved so far?

We have already implemented 35 proposals of the LLRC and more are to be implemented. Some of them deal with issues like land, which can’t be done overnight.

At the UNHRC session in progress right now, your ambassador admitted there have been thousands of cases of disappearances during the war years.

We have already appointed a Disappearances Commission in Sri Lanka, and about 20,000 cases have appeared before the commission. The cases are from both the North (Tamil-dominated areas) as well as from the armed forces. The report is still not out, but from what I understand, the majority of the cases are where the LTTE was responsible for the disappearances.

Five years later, the accusation that arises is that President Rajapaksa won the war, but is yet to win the peace?

If you go to the north and east you will see the real situation. We can’t change the mindset of the older politicians, the ones who were once entrenched with the LTTE, but younger people feel differently today. We held provincial council elections there last year, knowing very well that we would lose. There is a new freedom of movement after the war. People from the north are freely travelling to the south in Sri Lanka, those from the south feel comfortable travelling to the north.

“India has nothing to worry about from China in Sri Lanka. Until I am here, I can promise that”

Members of the TNA were recently in New Delhi. When they met Mr. Modi, they listed their concerns, including your government’s failure to devolve power, the presence of military in the north and east, and your interference in civil administration.

There is no interference at all. Of course, the main officials are appointed by me. But when they have asked me to transfer them, those officials go to court…what do I do?

You are referring to the Chief Secretary who went to court. If you have allowed this process, if you have had elections, shouldn’t you now hand over these powers to the elected representatives?

The Chief Secretary is a bureaucrat. She is an independent person. Now, when it comes to the 13th amendment, other than police powers, they have all powers, and I can discuss that with them.

That’s not quite accurate, as the Chief Minister cannot choose his bureaucrats, and they don’t report to him.

Now of course, that is something we can discuss. I am ready to talk to the TNA, but they refuse to talk to me. Without a dialogue how can I discuss devolution or anything else?

Are you upset with their meeting with Mr. Modi then?

No, not at all…they can go meet anyone. It is a democracy.

And what about the presence of military in the north and east…it isn’t just a large presence, but the land they have acquired.

Since the war ended in 2009, the presence of the military has been reduced by 90 per cent. I am trying to move them to other areas…but how much further can I go? I have to find space for my Army in Sri Lanka itself…I can’t send them to be housed in India or some other country, can I?

But the most emotive issue for India has been the idea that there is colonisation of Tamil areas, that non-Tamils are settling in those areas.

I deny that categorically. There has been no demolition of Tamil monuments. There is no colonisation. But in Sri Lanka, any citizen can live in any part of the country — whether the person is Tamil, Sinhalese or Muslim.

Part of the reason it is difficult for the Central government to move forward in ties with Sri Lanka is the bad relationship you have with political parties in Tamil Nadu, particularly with Chief Minister Jayalalithaa.

What can I do? I have always tried to speak. (smiles) I always raise the white flag of peace with her.

Yet your Defence Ministry website portrayed her in a derogatory manner …

That was a serious error and that is why as soon as the Defence Secretary came to know of it and told me, it was taken off immediately and we apologised. Even I apologised after that.

The long-term problem is that of fishermen from Tamil Nadu being arrested by the Sri Lankan Navy.

I always believe that fish do not have any borders, and fishermen have to follow the fish to catch them. But the fishermen from the Indian side have been destroying the environment, using massive bottom trawlers, which are depleting all the resources of fish, and we cannot tolerate that. And bottom trawling of this kind is banned even in India now.

You have freed the fishermen but not their boats. Is that something you would consider?

No, not at the moment. Because if I allow the boats to return, again they will return and do the same thing.

Do you think in the upcoming UNGA session, you will meet Mr. Modi? What kind of relationship do you share?

I think if he is able to, and we can find the time in our schedules, I would hope to meet him. I think it is too early to say where the relationship will go. I had only a brief chat with him in Delhi. I think our chemistry is good. He is a very strong leader and has won a big majority. I think we can deal very well, this is what I feel.

Has the relationship between India and Sri Lanka undergone a shift this year? India has backed Sri Lanka on its stand not to allow UN rapporteurs appointed by the UNHRC to visit.

Well, I think that shift came before the elections, when India decided to abstain at the UNHRC vote, and didn’t support the resolution for an international enquiry.

To go back to the UNHRC process now underway, the Sri Lankan ambassador has admitted there that there are 19,471 cases of missing persons. Why not allow the UN to assist finding them?

We want a local enquiry here to find out what happened to them. Obviously many are missing in the war, both from the civilians and the Army. But we reject this UN commission, and how it was formed.

From the beginning, the statements by the (former) UNHRC Commissioner (Navi Pillay) were biased. We invited her here. She told us one thing and said another thing after returning. But we have nothing to hide, so if the new Human Rights commissioner wishes to come, we would accept his request.

But even your government has admitted they are investigating the Muttur massacre (killing of aid workers ) and the Channel 4 allegations (of war crimes) and Ms Pillay has said your blocking the team won’t stop them from enquiring.

Our government is speaking of local investigations, but we won’t allow them to internationalise it. The next time if they will say that there must be an international enquiry into Kashmir, what would be our position? Would we support such a thing? No! Whether it is against India or Sri Lanka, we will not allow an external inquiry. It is all politics.

No, we understand. They had to face their electorate there. Look, relations between India and Sri Lanka are very strong and will remain strong. We will never forget that in the defeat of the LTTE, India was a major factor. We will not forget the support that India gave us.

Also at that time, a significant factor in India’s vote was said to be the publication of photographs of the killing of the LTTE chief’s son Balachandran. What has your enquiry on him revealed?

We are investigating it still…I don’t believe that it was (carried out by the military). But if it is true, I must know. That is why we are enquiring. In a war, when both sides are fighting, how can you say who shot at him?

Are you hopeful of a visit by Mr. Modi?

Yes, I am hopeful of it. When I met him the first time, I invited him. If I meet him at the U.N., and at the SAARC later this year, I will invite him again.

Of particular concern has been the plan for an air force maintenance base in Trincomalee which has been given to the Chinese (PLA-run) company CATIC….

How does it matter? Aren’t there Chinese companies inside India? In South India too? India has nothing to worry about from China in Sri Lanka. Until I am here, I can promise that.

There are reports that you are planning early elections, possibly in January 2015.

They could be. I am not ruling that out.