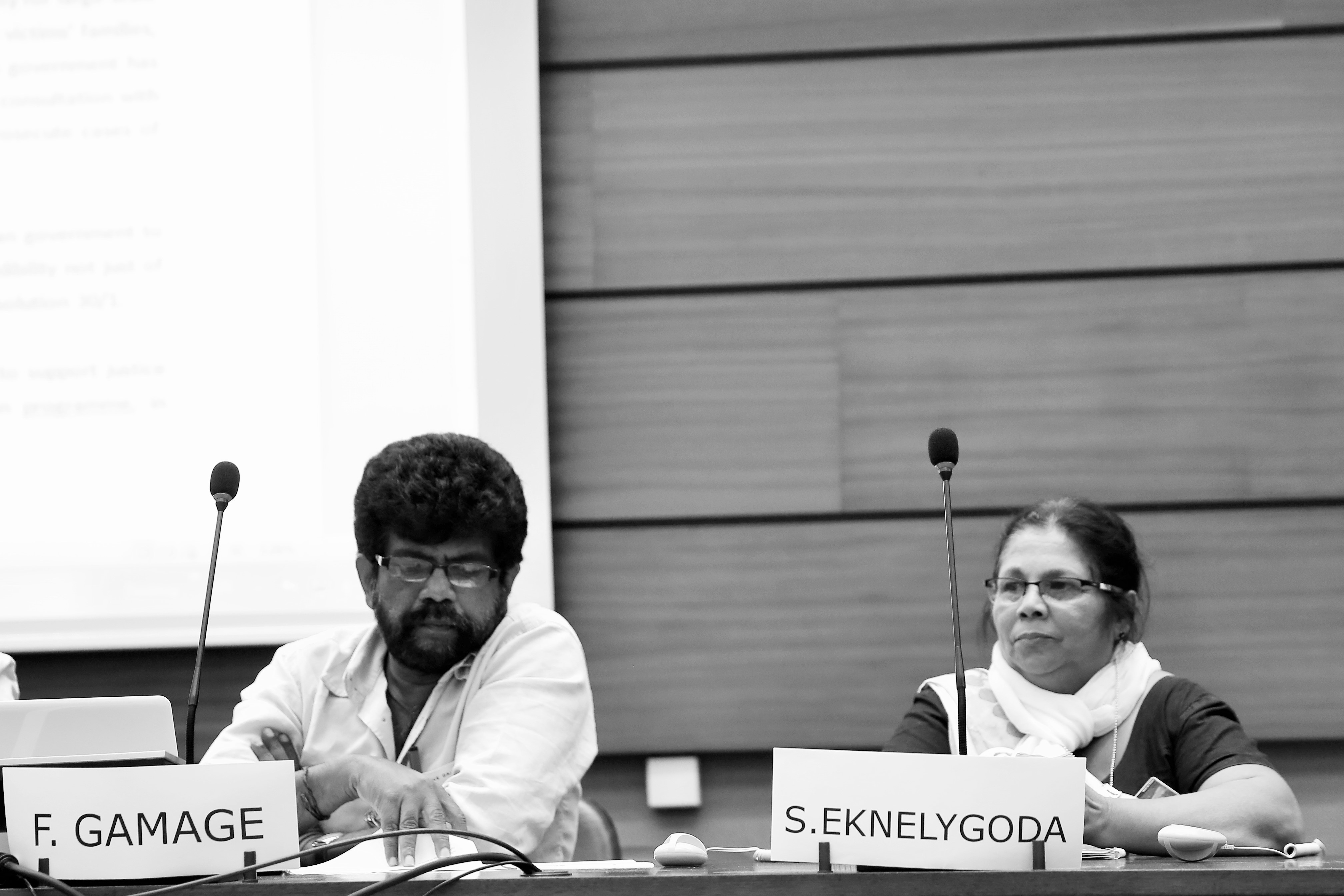 ( Freddy Gamage and Sandya Ekneligoda at a side event on 20 Sep 2016 at UNHRC ©s.deshapriya)

Dear solidarity friends, you all have helped us in many ways to make some positive changes in Sri Lanka.

Please do constructively engage with the Government of Sri Lanka, to consolidate and to bring more needed reforms. It is very important, since most of the governments come up with reforms just to please the international community not really to address the issue. This is the challenge.

We have already heard some of the experience of struggles in searching the loved ones who were disappeared. Let me share one more story – the story of Subramaniam Ramachandran, a journalist from Jaffna.

He has been missing since 2007. Few weeks before his disappearance, Ramachandran had written an article on illegal sand mining and transportation which was taking place with the involvement of businessmen and military officers.

His colleagues believe that his abductors were persons angered by this article.

Year 2009, few months after the civil war ended, Ramachandran’s sister Kamalashini was visited by six persons from the police and the Military. They requested her for all Ramachandran’s personal documents including his educational certificate.

When his father handed over the documents at the Point Pedro police station, he was told that these documents were requested to give Ramachandran a job.

Few days after the incident, Ramachandran’s father had made a complaint to the Point Pedro Police station, but there had been no responses from the Police to date.

Ramachandran’s case is one of the few cases where there are compelling evidences and eyewitness accounts to unravel what happened to him after his disappearance.

This includes reports of him being seen at a specific Army camp in 2013, 6 years after he had disappeared. However, the family has not been informed of any attempts to obtain information from the authorities.

Ramachandran’s family has been waiting for nine years in the hope that he would return one day.
Will Ramachandran ever return home?

Now we have at least a place to complain. We need more constructive engagements. We demand the Government to do consultation with the family members of the disappeared in every possible moves.

We salute for the tireless efforts of Sandya finally brought the culprits to the court, and also the effort of Vathana and thousands of mothers and wives in Sri Lanka.

As you hear the story of Subramanium, it also has lot of evidence/chances of questioning the officers and related institution and need to bring the culprits. We need your support, solidarity and guidance

Subramaniam’s case is one out of 44 cases related to journalists and media workers who were murdered or disappeared under the hands of previous regime.

Last human rights day in 2015, we submitted the list to the prime minister. He said families of the murdered journalists should be given compensation.

Yes its important, but more important issue is justice. Yet the Government is always reluctant to address  it.

July 2016 , when 54 Northern journalists met with President Sirisena and Prime Minister Ranil Wickremesinghe at the parliament.

I had noticed two suspicious men wearing full face helmet and jackets, looking in my direction and had turned to look at them. One of the men had then attacked me on the head with a strong pole from a tree. I had tried to dodge it, but it had hit on the side of my head, then I run back into the Municipal Council building. From there, I was told by eyewitnesses that the assailants had fled on a motorbike which had no number plates.  Then I was hospitalized for several days.

In my statement to the police I clearly stated this attack is due to the exposes of the mafia business of one political family in our city. They have earned a huge amount of back money during the previous regime .

On 16th of May 2016, one family member, the Deputy Mayor of Negombo city threatened me over the phone. He said that I should not write bad things on them, but only good things. Then the attack came 2 weeks after.

There were 16 phone calls between the attacker and the Vice Mayor just within 5 hours on the day of my attack.

Due to the pressure in many ways, the incident finally led to the arrest of attackers within 48 hours .

Yet even after 3 months of the attack, the mastermind of this attack, the Vice Mayor in Negombo, is still not yet arrested.

Despite the evidence of the 16 phone calls between the attacker and the Vice Mayor, the police has failed to arrest him. This the litmus test to the good governance and police. We are waiting for further progress in good governance and justice system.

-Speech by journalist Freddy Gamage at a side event during the 33rd session of UNHRC, Geneva on 20th Sep 2016;

Freddy Gamage is a web journalist who runs several city based web sites in the country.He is also the convener of Professional Web Journalists Association and the convener of Action Committee for Media Freedom .Recently he was attacked since he exposed the corruption of a strong political family in his town. He also works on the issue of disappeared journalists.