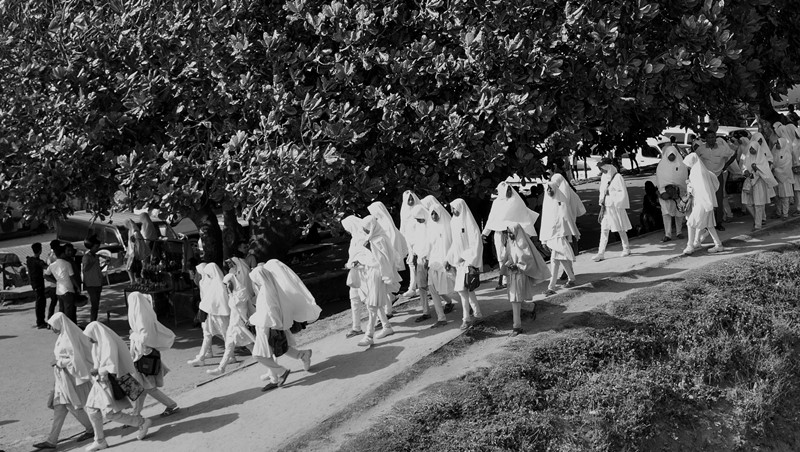 In 2014, a 14-year old Muslim girl in the Eastern province was given in marriage and her schooling was stopped as a result. After a few months of marriage she applied for fasah divorce (initiated by wife) at the Quazi courts, due to severe sexual torture by her husband.  The Quazi judge instead of dealing with the case in a sensitive and appropriate manner chose to interrogate her for over two hours asking her specific details about the sexual violence. This in turn caused the girl serious psychological trauma that she attempted suicide and faced severe depression thereafter.

This case is one of many in which Muslim women and girls are not only affected directly by discriminatory provisions within the 1951 Muslim Marriage and Divorce Act (MMDA), but also as a result of the sub-par Quazi court system set up under the Act, which has untrained and many unqualified Quazi judges.

There are major concerns that the MMDA violates the rights of Muslim women and limits access to justice, due process and redress. These concerns are with regard to provisions within the Act itself as well as practical problems with procedures and implementation via the Quazi court. Some examples below:

The Act legally allows child marriage by not stipulating the minimum age of marriage for Muslims as 18 years (under the Act a Quazi judge can even permit the marriage of a child under the age of 12);

Muslim women’s groups have been advocating for reforms of the MMDA for over 25 years and there have been at least four official committees set up since 1970’s with no progress on reforms. The current 16-member Muslim Personal Law (MPL) Reforms Committee headed by Justice Saleem Marsoof was set up in 2009, by the then Minister of Justice Milinda Moragoda in view that “certain reforms to the Muslim personal law was urgently needed”. Seven years later, the report is still pending.

Urgency in light of constitutional reforms

During the consultations conducted by the Public Representations Committee (PRC) on Constitutional Reforms around the country, many women’s groups and women affected by discriminatory provisions under the MMDA and practices of the Quazi courts brought up concerns regarding the Act.  Their submissions were with regard to the fact that the current Constitution grants an exemption for personal laws to violate fundamental rights though the existence of Article 16(1).

On August 24th 2016, a group of fifteen Muslim women made an appeal to Honorable Mahinda Samarasinghe and the rest of the sub-committee drafting the Fundamental Rights Chapter of the new constitution. The appeal was simple – that Article 16(1) is repealed to ensure that the new Constitution is the supreme law of the land and that fundamental rights and gender equality is ensured for all citizens regardless of religion or ethnicity. They avered to the State’s responsibility to protect the fundamental rights of all its people irrespective of age, gender, ethnicity, religion or any other identity markers.

However certain conservative groups among the Muslim community – while acknowledging that there were major problems with the MMDA and its implementation – claimed that repeal of Article 16(1) is not necessary because the Muslim community will reform its own personal law “from within”, in order to address concerns of women and girls. They referred to the MMDA reform exercise as an example of how the community could address these grave and fundamental concerns.

Appeal to the MPL Reforms Committee and Sri Lankan leaders

At this crucial juncture, therefore it is important for the community in general and Muslim women in particular to know the outcome of the committee’s deliberations and as to how it compares with the protection and equality that Muslim women and children can avail of by calling for repeal of Article 16(1) in the new Constitution.

Therefore, we appeal to the members of the MPL Reforms Committee, Minister of Justice and Judicial Service Commission to inform the Sri Lankan Muslim community as to when the report is expected to be finalized. Also given its relevance to the constitutional reform discussion outlined above, we kindly request that they immediately share the salient outcomes of the reform discussions to date pending the release of the final report. As the group that had been most intimately involved in this issue over the past seven years their informed intervention at this juncture will be invaluable. Of particular interest will be to see how the recommendations addresses discriminatory provisions currently in place that violate fundamental rights of Muslim citizens.

We appeal to the leaders of this country, and those formulating the new Constitution to continue to uphold a clear vision of equality for all citizens. The Muslim women and men appealing also firmly believe in the freedom to practice religion with respect and dignity for all, including women and not just men.

Do not deny Sri Lankan Muslim women and girls from fully enjoying their fundamental rights as full citizens of this country. Ensure that the new Constitution is in-fact the heart and soul of a progressive nation that refuses to exclude any citizen.