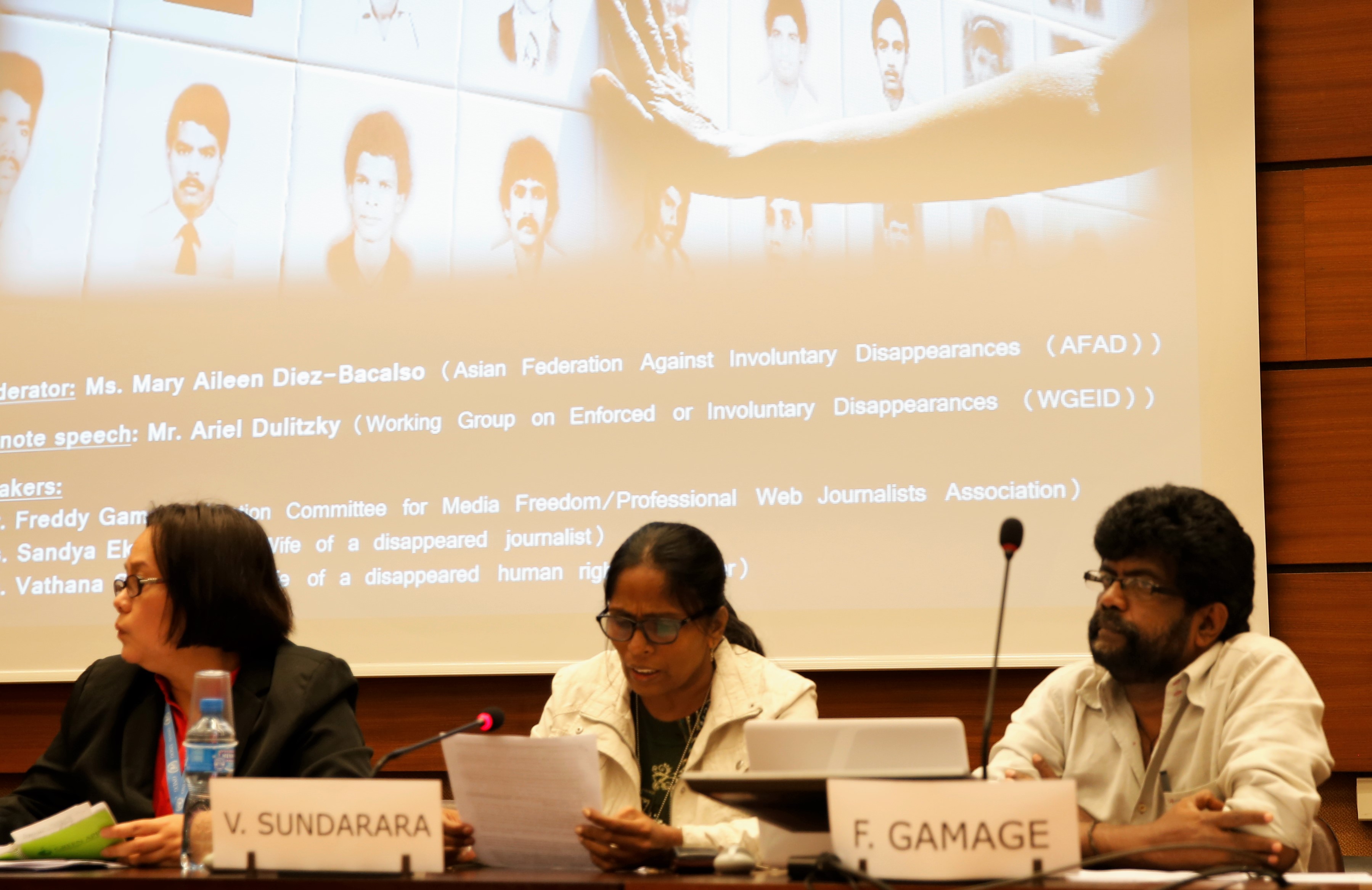 (  Ms. Arulvathana Stephen Sunthararaj  -in the middle- making her speech)

Speaking at a side event at UNHRC (place de nation) today  Ms. Arulvathana Stephen Sunthararaj  called on the UN and international community to continue to urge Sri Lankan government to ensure meaningful consultation and inclusion of victims, which are essential to the credibility not just of the OMP, but for all of the justice and accountability mechanisms established under Resolution 30/1.  She further asked the government of Sri Lanka to to take steps to dismiss officials undermining efforts to support justice and accountability. The government must establish an effective witness protection programme, in compliance with provisions in Resolution 30/1.

As a mother of three young children, a victim of war and now an uncompromising voice for truth and justice, I have not come here to speak for myself and my family but on behalf of thousands of mothers, wives daughters and sisters who are in search of their loved ones. Equally, I speak for political prisoners and their families whom I work closely with.

I was here last September when the OISL (OHCHR Investigation on Sri Lanka) report was tabled at the 30th Human Rights Council session and the Resolution adopted at the same session which was jointly supported by the Sri Lankan government calling for promotion of reconciliation, accountability and human rights in Sri Lanka. There was hope.

But today a year later, with little faith in the work that is being carried out in my country, I wish to give my perspective as a victim: Although adoption of Resolution 30/1 in October 2015 was a major achievement and an important milestone in Sri Lanka`s journey towards a just settlement; progress in implementing Resolution 30/1 had been slow and there are growing doubts about the government`s political will and ability to see the difficult process through.

The government has failed to show transparency and genuineness in carrying out the national consultation, which is a precondition to design the mechanisms of the transitional justice process.  Participation and contribution of communities directly affected by the war, and activists working with affected communities in the North and East were denied while designing the Office of the Missing Persons (OMP).

On passing of the bill to establish OMP, I express deep skepticism regarding this mechanism given my experience with the Presidential Commission to Investigate Missing Persons in the North and East (also known as the ‘Paranagama Commission’).

While questions and concerns on the OMP are being raised by us—the affected communities; passing of the bill is an ideal example of government’s arbitrary attitude and lack of commitment.

The government is forcing their plans upon us without considering the importance of participation and contribution of the affected communities in creating reconciliation and bringing about a lasting solution to the ethnic divide. Therefore, we have lost faith in the Sri Lankan government’s efforts in carrying out the transitional justice process.

For many years, families are desperately trying to know the situation of our loved ones who were forcibly made to disappear and surrendered during the final stages of the war.  The government must not delay in disclosing as to what happened the disappeared and where they are.

In my case, I have managed to be self-sufficient, but there are many struggling to survive. I believe the government has discussed nominal reparations without understanding how hard it is for a single woman to raise her children and make up for a lifetime of no earnings.

As legal aid officer my job enables me to work with political prisoners detained under the Prevention of Terrorism Act (PTA), and their families. I know their stories. There are two CHRD clients who have been held in Anuradhapura for 8 years without charge and four who are in Boosa whose cases are proceeding very slowly. I know how hard it is for families to see their detained loved ones — not only is it cost prohibitive and often far, prison officials limit such difficult visits to 10 minutes.

PTA is very much alive and arbitrary arrests, inquiries, detention, torture and intimidation is continuing.

Repeal of this Act is important, but more needs to be done. I have noted that cases in the North receive more favorable outcomes than in the South. I believe the problem is not just the law, but discrimination and bias. Therefore, independence of judiciary is important for an accountability mechanism.

Successful implementation of these mechanisms is central to the success of the government’s larger agenda to promote good governance and rule of law. While an Office of Missing Persons (OMP) has been established to help thousands of families seeking information about relatives missing during the civil war, it lacks any effective link to criminal investigations and, thus maintains impunity for large-scale enforced disappearances. The design of the OMP also lacked genuine consultation with victims’ families, undermining confidence among victims’ groups and civil society.  Although Sri Lankan government has ratified the U.N. Convention on Disappearances, this will have little meaning if genuine consultation with victims continues to be ignored and if the government remains unwilling or unable prosecute cases of forced abduction and murder, for which they already have substantial evidence.

Therefore to call on the UN and international community to continue to urge Sri Lankan government to ensure meaningful consultation and inclusion of victims, which are essential to the credibility not just of the OMP, but for all of the justice and accountability mechanisms established under Resolution 30/1.

And also urge the government to take steps to dismiss officials undermining efforts to support justice and accountability. The government must establish an effective witness protection programme, in compliance with provisions in Resolution 30/1.