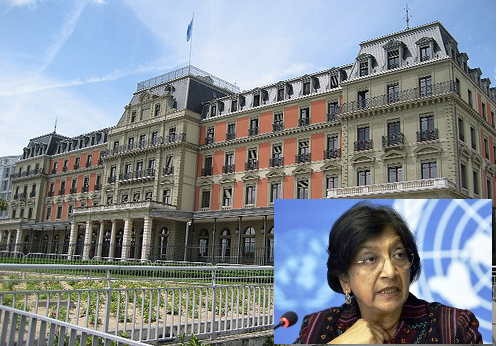 Dharisha Bastians
UN (OHCHR)The UN team probing major human rights abuses by both sides during the last seven years of the Sri Lankan war will comprise at least 13 members, supervised by two experts, including at least one high profile personality in the international arena, the Daily FT exclusively learns.
The experts and sections of the investigation team, which will include forensic experts to study digital evidence, will travel to Sri Lanka and the Asia Pacific, North America and Europe over the next eight months, to gather witness and victim testimony and access ‘other sources of information’ to complete its findings, the Daily FT learns.

The international investigation that was mandated by the UN resolution on Sri Lanka passed in March this year, after being moved by the US and 42 co-sponsors, is expected to commence in the coming weeks.The two experts will work on a pro-bono basis for the period of 10 months, to provide high level expertise and guidance to the investigation, analysis and preparation of report, according to a UN Human Rights Council document outlining the preliminary budget and staffing for the Sri Lanka probe.

Office of the High Commissioner for Human Rights (OHCHR) staff will conduct the investigation, but the report will be rubber-stamped by the two pro bono experts – one very senior personality of international stature, highly placed sources told the Daily FT. Speculation that former UN Secretary General Kofi Annan could be tapped to lead the probe arose from this decision to appoint at least high profile figure with international name recognition, the sources said. The OHCHR had a comprehensive list of ‘senior experts’ that were to be approached for availability, the Daily FT learns.

“We know that it will be someone with very high international stature – like a Michael Kirby or a Kofi Annan,” a source with knowledge of the process said. Kirby is a former Australian jurist who headed the Commission of Inquiry on the DPRK (North Korea) mandated by the UNHRC. However, Annan was an unlikely choice to lead the Sri Lanka probe because the head of the investigation would report to the High Commissioner for Human Rights, likely UN officials who worked under the former UNSG in the past, sources said.

While the initial outlay of budget and staff is not final, the Office of the High Commissioner for Human Rights has earmarked three human rights investigators, one legal advisor, a senior coordinator, an administrator and a Sinhala and Tamil translator to be part of the investigation panel. One of the human rights investigators will specialise in gender issues, according to the preliminary staffing outline.

A forensic consultant to analyse photographic and video material and an archiving consultant will also be enlisted for shorter periods, according to the document currently in possession of the Daily FT. Provision has also been made for a single security officer to travel with the investigating team if access is granted to Sri Lanka.

A preliminary budget of $ 1.4 million has been allocated for the investigation, but the figure could be higher by the time the probe is officially announced by Pillay’s Office, sources said. The composition of the investigating team could alter slightly by the time the final announcement is made early this month.

The investigators will consult with three ‘relevant’ UN Special Rapporteurs, namely Extra Judicial and Arbitrary Killing, the Working Group on Enforced and Involuntary Disappearances and the mandate holder on Torture.

Travelling budgets have been provided for the two pro-bono experts, to Geneva, Sri Lanka and the Asia Pacific, and for one of the experts to travel to Europe and North America for five days each. “The two experts will participate in information gathering and interviews with victims and witnesses in these locations,” the document said.

After several weeks of delay, the Office of High Commissioner Navi Pillay is expected to announce the composition of the investigating panel over the next 10 days before the next UNHRC sessions commence in Geneva on 9 June.

Several sources confirmed that the delay could have been a result of being unable to confirm availability of one of the top experts who will lead the mission, who would require to commit to about 10 months of work.

The OHCHR will inform the Government of Sri Lanka through its mission in Geneva of the investigating panel and its terms of reference, before going public with the announcement, it is also learnt. However the Permanent Mission of Sri Lanka to the UN is yet to be officially notified.

The OHCHR investigating team will be called upon to present a preliminary report to the Council in September, but its final report will have to be ready by January 2015 in order to be presented before the UNHRC March session. This would give the investigators a little over six months to complete its findings and compile a report, human rights activists said.

The Daily FT learns that High Commissioner Pillay and her staff team remain determined to get the Sri Lankan Government to engage with the investigations mechanism, even though the Government has rejected the probe outright and publicly refused to cooperate. Pillay’s Office is firm that the Sri Lanka investigation will be an OHCHR led probe and not assume the style of a Commission of Inquiry, as with North Korea and Syria, the Daily FT learns.(Daily FT)