The logic of the ban :How the proscription of 16 Tamil diaspora groups will be felt locally and internationally 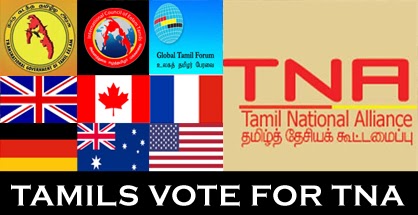 Ranga Jayasuria
The government this week banned the Liberation Tigers of Tamil Eelam and 15 other Tamil Diaspora organizations under the UN Security Council Resolution 1373, which sets out strategies to combat terrorism and terrorist financing.
Sixteen groups were designated as terrorist groups and front organizations in an order signed by the External Affairs Minister G.L.Peiris and a gazette notification is expected to be issued to that effect in the near future. Customarily, it is the President who is also the Minister of Defence who has authority to designate terrorist groups.

That the external affairs minister, who is meant to handle international affairs of the government, signed the decree on domestic security may add to confusion over the overlapping powers of the Cabinet portfolios.

Why Prof. Peiris signed the Bill could well be explained by its intended international implementation. He will now have to get the western democracies to follow suit, which is however a tall order.

A proscribed group
The LTTE has been a proscribed group since 1978 and the ban was temporarily lifted in 1987 as part of the Indo-Lanka peace accord. It was banned again in 1998 after the bombing of the Dalada Maligawa and the ban was suspended in 2001 during the peace talks between the LTTE and the Ranil Wickremesinghe administration. It was banned again in Janaury 2009 and the ban remains effective to date, though the LTTE itself was annihilated in May 2009. The LTTE is also a banned terrorist group in India since 1994, in the US since 1998, and in the UK, Canada, EU and Malaysia. Therefore, the latest decree does not change the status of the organization.
The intended target of the latest pronouncement is not exactly the LTTE but 15 other Disapora groups, who have shared an allegiance of varying degree to the Eelam cause. While some groups such as the
Transnational Government of Tamil Eelam are born out of hardcore Tamil Tiger operatives, some others such as the Canadian Tamil Congress (CTC) have been moderate. The CTC, in fact, supported Gen. Sarath Fonseka, the common Opposition candidate during his ill fated presidential bid. Tamil Diaspora itself is a disparate group. Lumping all of them together is defeating the intended purpose of the government initiative itself. While the western governments, whose law enforcement agencies , that have monitored those groups and found little incriminating evidence against them, would view the Sri Lankan initiative as a witch hunt and are unlikely to cooperate.

On the other hand, the moderate Tamils who had been targeted by the said initiative would further distance themselves from the Sri Lankan State.

Also, Sri Lanka is not in a position to campaign for an ambiguous initiative like this, given the international concerns over its human rights record.

The incumbent regime lacks both credibility and legitimacy to demand the western democracies to ban the Diaspora groups and to freeze their financial assets. In order to pursue the western governments to take action, Sri Lanka should be able to provide incriminating evidence against those groups, implicating them with financing and supporting terrorism in Sri Lanka. (That those groups had shared information on rights abuses in Sri Lanka with Callum Macrae or Jonathan Miller is not a compelling enough reason.)

However, apart from a disputed claim over the resurgence of the LTTE, Sri Lanka had failed to convince either the discerning Sri Lankans, or the international community of a credible security threat posed by those non State actors.
Therefore, Sri Lanka will have to show evidence. There again, the reservations over the credibility of the local agencies would be raised, given the controversial nature of the recent arrests such as that of Ruki Fernando and Father Praveen.

The bottom line is that in the absence of compelling evidence, any of the western democracies or our neighbour, India is unlikely to follow up the Sri Lankan decree.

Second, Sri Lanka has not only miscalculated the limits of its diplomatic persuasion, it has under estimated the strong democratic values in the West, which would stand on the way of arbitrary actions of the host governments.

Some of the groups such as the British Tamil Forum, Canadian Tamil Congress and Australian Tamil Congress have become part and parcel of the civil society of the western democracies. While the Sri Lankan Government had a historical proclivity to debase the civil society and lock up its activists, such conduct cannot set a precedence in the host countries of those Diaspora groups, where strong human rights guarantees serve as a deterrent against impunity of the State.

Resolution
For instance, radical Islamic cleric Abu Qatada fought a legal battle that lasted for years against the British Home Office which wanted to extradite him to Jordan to face charges of terrorism. A known hate preacher, Abu Qatada’s defence was that he would be subjected to torture in Jordan.

This week’s ban on 16 front groups was announced under the UN Security Council Resolution 1373, thereby exploiting the legal regimes of the global war against terrorism.

The resolution calls for a greater cooperation to combat terrorism. It asks the member States to take appropriate measures to ensure that the asylum seekers had not planned, facilitated or participated in terrorist acts before granting refugee status. Further, States should ensure that refugee status was not abused by the perpetrators, organizers or facilitators of terrorist acts, and that claims of political motivation were not recognized as grounds for refusing requests for the extradition of alleged terrorists.

It also emphasized the need to enhance the coordination of national, sub-regional, regional and international efforts to strengthen a global response to that threat to international security.

Nonetheless, the decision to designate a foreign terrorist group is the sole discretion of the said, the member States, which it would arrive at based on verification and calculation of the threat by their own domestic agencies. However, for the moment, Sri Lankan decision is unlikely to have any impact internationally.

Logic
This should bring the discerning Sri Lankans to the sinister logic of the proscription of the 16 groups. All politics is local. The government, which had increasingly become insular, is trying to tame and subjugate local rights activists. The latest government decree would threaten the local human rights activists and NGOs who have been working together with Tamil Diaspora groups on the issues of accountability and justice .

Equally disturbingly, the latest decree leaves room for abuse, thereby enabling the security apparatus to indulge in a witch-hunt against the dissenting voices of the regime.

Also, the decree comes into effect only days after the UN Human Rights Council mandated the Office of the High Commissioner for Human Rights (OHCHR) to investigate the alleged violations of international human rights and humanitarian law in Sri Lanka.