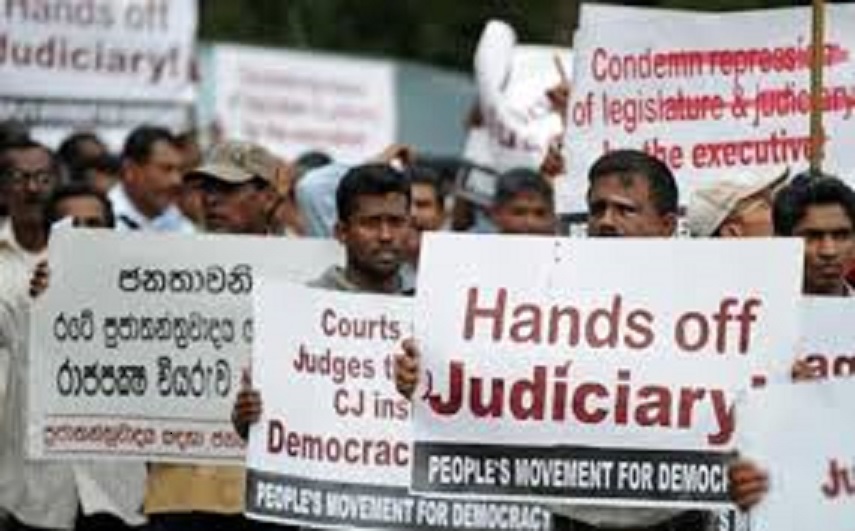 The ongoing war of words in Parliament over the appointment of judges to the superior courts has an increasingly sinister dimension to it that must not be underestimated.

Taken together with the push by some politicians and supportive monks to seek a presidential pardon for General Secretary of the Bodu Bala Sena, Galagoda Aththe Gnanasara who is now serving a jail term for insulting the judiciary, the cumulative impact is highly inimical to the continued functioning of an independent judiciary.

The signs are unmistakable and eerily familiar. This is precisely the manner in which judges who acted as the Constitution’s guardian were brought to heel in the past. Then too, parliamentary privilege was used to personally attack judges. Little by devastating little, the edifice of an independent judiciary crumbled. Once upon a time, it would have been inconceivable for a judge to express partisan views from a political platform after retirement. But we began to shrug our shoulders and turn away. The repercussions of those years still rebound as this week, a former Chief Justice was noticed for contempt of court by the Supreme Court. Such a development would have been unheard of two decades ago.

So those cynics who maintain that the Sri Lankan judiciary has itself been responsible for its own degeneration may be correct but only in part. Even during those turbulent times in the past, brave judges stood up to political pressure and performed their judicial role impeccably, with painful costs to health and reputation. Last year, as judicial officers from the Supreme Court downwards to the Magistrate’s Court stood firm in face of unprecedented political chaos, pulling the country back from the brink of a constitutional abyss, we have reason to be grateful for that renewed strength.

Dangerous undercurrent to the attacks

This is why political attacks on judges have resumed and must be resisted in full force. For there is a dangerous undercurrent to the attacks that was absent earlier or perhaps, was not articulated with total political impunity as it is today. Then, the clashes were institutional; the institution of the legislature or the executive against the institution of the judiciary and the competing power dynamics therein. Now there is a distinct crudity to the attacks on the floor of the House, using every weapon to hand (communal, religious, race). This is crossing a line that was not crossed earlier, at least openly. Where will this end? We must surely be glad that Illustrious judges of the Court whose reputations and judgments marked Sri Lanka as a singular example of a Commonwealth country where the law and the Bench was respected despite decades of civil and ethnic conflict, are not alive today to witness this ugliness.

Overall, there are two aspects that are equally important. First, we have the hate-mongering indulged in by pointmen of the Rajapaksa faction as seen recently in statements made from the Opposition benches without any credence whatsoever that judges of a ‘Christian persuasion’ were being favoured over their colleagues in the promotion process. These are crude tactics. But the second aspect of this problem concerns the call by Opposition parliamentarians to disclose the criteria on which promotions and appointments of judicial officers take place. Clearly this is a thinly transparent device to mask its crude tactics but even so, a sensible way of meeting those challenges may be in order.

In the face of a sustained campaign from the Opposition benches in this regard, Speaker Karu Jayasuriya defended the process adopted by the Constitutional Council (CC) this week, saying that the seniority of nominees was just one factor that was considered, along with (as reported in the media), the ‘reputations’ of the nominees and the recommendation of the Chief Justice when promotions of judicial officers were considered. This was in the context of a tussle between President Maithripala Sirisena and the CC in respect of the appointment of the President of the Court of Appeal when the President’s nominee was rejected by the CC. The Speaker observed that when considering recommendations for appointments or promotions as required by the law, the CC followed the same criteria specified in the 17th Amendment to the Constitution.

Disciplinary processes of judges of the superior courts

There is little doubt that seniority is only one of several considerations. Sri Lanka’s history is replete with instances where senior deserving judges have been bypassed for politically compromised choices. However and even so, it is important to note that this matter is linked to a larger question of the disciplinary processes of judges of the superior courts. In any institution, the criteria for promotions takes into account, seniority, performance in the position, inquiries of fraud and corruption or behaviour not befitting the post. This must surely be the same for judges as well. For example, if a judge is found to have misappropriated public funds or taken money from a politician or any other person for that matter or received any inducement (be it a car or the funding of a wedding ceremony of a child), that must lead to impeachment proceedings.

But while it is the Judicial Service Commission which looks into the disciplinary processes of judges of the subordinate courts, an impeachment motion in Parliament (with all its attendant political divisions) is the sole and only option where judges of the superior courts are concerned. That must change. Rather than impeachment at each and every point which is rarely resorted to unless for political purposes in Sri Lanka, the process of inquiry into such allegations must be devised in such a way that it is less politicised.

Further, transgressions of a ‘lesser variety’ (as opposed to impeachable grounds) on the part of judicial officers must also be of record, not float around in the realm of speculation, gossip or the frenzied habitats of the social media. Conflicts of interest that are not declared when hearing a case must rank on the top of that list. In that way, no politician can get up on the floor of the House and bellow that ‘so and so’ should not be disregarded in the process of promotions as the factors militating against such a promotion will be on record.

This calls for serious and thorough reform proposals on the Sri Lankan judiciary that the Bar may well have usefully got itself engaged in during the past three years without swaying from one side of the political divide to the other. Issuing statements condemning politicians who attack judges using parliamentary privilege is just the bare minimum. Much more is expected from the Bar. The strength of Sri Lanka’s judicial institution should not rest on the shoulders of a few courageous judges who are then left to face a crude political storm at the whim and fancy of political ruffians. The events of October 2018 may have gone in an entirely different direction if judicial fortitude had not been demonstrated.

That is a self-evident warning.