Sri Lanka: No need for war crime probe; CTF have no right to comment of foreign judges – CBK 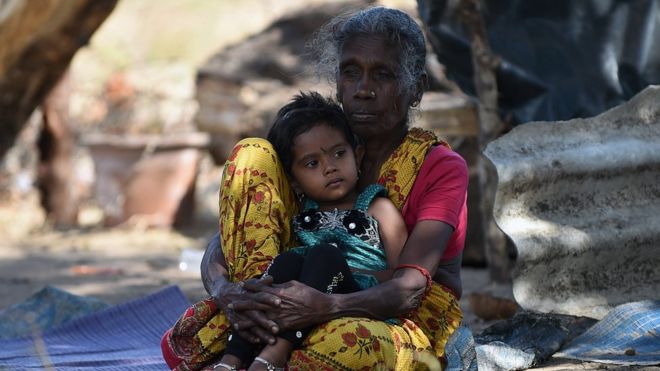 Image: A Sri Lankan Tamil woman and child look on in the eastern town of Muttur. (c)AFP.

Chairperson of  the Sri Lanka government appointed Office for the National Unity and Reconciliation (ONUR), former president Chandrika Kumarathunga says that after  a new constitution and the Office of the Missing Persons, there would not be any necessity to have courts to probe war crimes. She says that “What is urgent now is to bring in a new Constitution, and then comes the establishment of the Office of the Missing Persons”.

She also says that Consultative Task Force for Reconciliation has  no right to comment on the necessity for foreign judges in accountability mechanisms. According to Kumarathunga “the CTF  was entrusted to obtain the views of the public and submit its report to the government. That was the responsibility of the committee. Their own ideas too had been incorporated in the report”

She has expressed these opinions in a lengthy interview appeared in the Daily Mirror.

The CTF report was presented to her by its chairperson Mrs. Manori Muththettuwegama, who headed two disappearance commissions appointed by Kumarathunaga her self in mid 90s.

In the same interview she has praised the Government for its achievements during last two years.

“During the first nine months of this government, it was not allowed to function by MR. This proves that the government has not completed even one and half years. During this period so many things had been put on the correct track.

That is why I say that I am satisfied. I will be very happy if the government could act faster. Among the Ministers from the UNP, there are many who had never been ministers early, and many SLFP members who are holding portfolios had been ministers of the earlier corrupt government.

This may be the reason for the government to be slow. However it is a happy coincidence that these two parties had been able to work together, which is historical. Another matter I want to state is that there are rogues in this government as well. I know it clearly well. No meaningful steps had been taken to arrest that situation. Even what could have been done initially had not been done. My thinking of good governance is that not only the former Ministers, but even the present ones who had done wrong should be punished.”