Sri Lanka government’s talk about prevention of torture is just a window dressing to the European Union – M.A. Sumanthiran, MP. 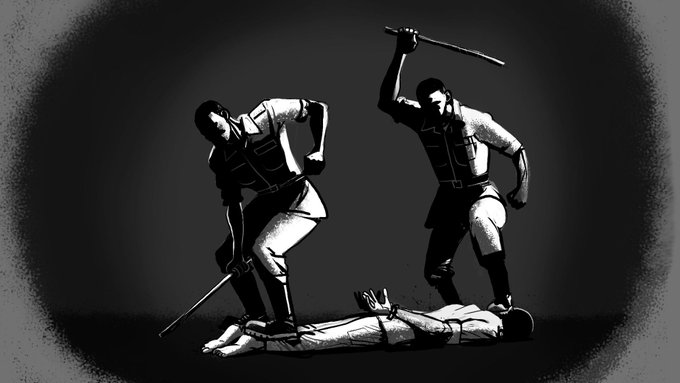 The Hon. Minister of Justice has presented to the House amendments to the Code of Criminal Procedure Act, and to the Convention Against Torture and other Cruel, Inhuman or Degrading Treatment or Punishment Act, and certain Orders for approval.

I must thank the Hon Minister for remaining in the House after presenting these Bills and listening to the various comments that are being made on this matter. The matters that have been placed before the House are very, very important and serious in nature.

It’s too late! And I want the European Union and the entire world to know that this is just eyewash!

What we see in the amending Act, in both the amending Bills, we welcome, because it seeks to make it obligatory on magistrates to visit Police stations and if I heard the Hon. Minister right, not just the Police stations but also other detention centers and examine and see whether the detainees are properly treated, particularly with the view to ensuring that there is no torture or other cruel inhuman or degrading treatment meted out to them.

26 years of the The Convention Against Torture and other Cruel, Inhuman or Degrading Treatment or Punishment Act has seen just 9 convictions, 6 of which are under appeal.

So, on paper its a good move. But one wonders why this window-dressing is being made now? If any of us who are aware of the actual situation with regard to torture in this country, would wonder why this amendment is being placed today? So much for shouting from the rooftops that we are protecting our sovereignty, we are not bowing down to international pressure and all of that, but all of these façades are being built and I don’t know who you are trying to fool.

The Convention Against Torture and other Cruel, Inhuman or Degrading Treatment or Punishment Act was passed in 1994 and we have various researches that have been made with regard to the efficacy of this Act. 26 years of this Act has seen just 9 convictions, 6 of which are under appeal. Very recent research publication by Law and Society Trust says that there were only 47 prosecutions – only 47 prosecutions! Less than 0.1 % of the complaints that are made. And one knows that even the complaints are only about 10, 20% of the actual happenings.

The calculation, a very generous calculation, will show there are only 0.06 % of the complaints result in any conviction.

For various fears – fears of reprisals, of further mistreatment, of family members being put in Jeopardy, all of those and only about 10 – 20 % actually make the complaint and I just worked out the figures these Act in operation has been a dismal failure.

The calculation, a very generous calculation, will show there are only 0.06 % of the complaints result in any conviction.

Not by law, not by anything, but we have a situation in this country, time and again we have judgements from the Supreme Court finding police officers guilty of torture. There are judgements. The Hon. Minister of Justice, being a lawyer, knows that very well.

Already, over 100 years, the prison ordinance, requires the magistrates to visit the prisons; do they do that? When did the last time a magistrate visited a prison?

Every volume, every single volume of law report has judgement of the supreme court finding police officers guilty of the most inhuman methods of torture. But they are not brought before court. You have this act to show people around the world that torture is an offence. Today you are even enhancing the fine, what for? You don’t prosecute them? Why did you waste this paper? Put it before Parliament? You don’t prosecute them. This is to show others. That’s why I called it a window dressing.

Already, over 100 years, the prison ordinance, requires the magistrates to visit the prisons; do they do that? When did the last time a magistrate visited a prison?

No! there is no mechanism, you already have, for 100 years, I have known one or two magistrates conscienciously have gone and visited prisons but they don’t do monthly, they must do that. They don’t do that and everyone knows that. No mechanism to enforce that. But even if you have a mechanism to enforce that, if the magistrates are not consciences enough, to do what the law has required them to do, can you by force have them do that? No you can’t.

Once a special Rapporteur of the UN on Torture, I remember his name very well, Manfred Nowak, came and visited places of detention. He was an expert in the field. You must read his report, I think the report came about 15 or 20 years ago, but still valid.

Later, another rapporteur, Mendez, who has given another statement – a report. You allow them to come to this country, because you want to show the world that you are open, there is no torture. Sri Lanka is one of the worst countries for torture by the police.

Torture in this country became an epidemic because of the provision in the PTA that enabled, that allowed, confessions made to police officers admissible evidence that’s how torture became endemic.

I’m happy that the Minister of public security is also here now. We are one of the worst countries. You can say this, you can present this, I heard the Minister say, buildings –the hardware, the laws that you have passed is software and he thinks that, that is complete. But where is the delivery, you have made the computer, you have programmed it, but doesn’t work; it doesn’t work, even the power doesn’t come on. In your hardware and software computer. It’s Broke; the whole system Insofar as torture is concerned, your system is broken and you can’t fix it by passing these laws.

One word about the Prevention of Terrorism Act: Torture in this country became an epidemic because of the provision in the PTA that enabled, that allowed, confessions made to police officers admissible evidence that’s how torture became endemic.

I repeat, the CTA [of previous govt] was a 100 times better than the PTA . But it wasn’t past unfortunately, because several of our civil society people thought we must only have a perfect Law, and so we now have the PTA.

I have demonstrated, I don’t want to repeat this, I have given stories after stories after stories…where crimes are supposed to have been solved, because you have a confession you convicted a wrong person. But what is dangerous in that is that the real culprit is still roaming free. He’s still there out on the streets. That is what is dangerous about this. If you are only concerned about the National security you say, your National security is gone. Because the one who actually committed the crime is out there, and you have got somebody else, got a confession, and put him behind bars.

But it wasn’t past unfortunately, because several of our civil society people thought we must only have a perfect Law, and so we now have the PTA. Because we couldn’t have a perfect law. There were shortcomings in that, but it was far better.

You can’t amend the PTA, you have to repeal the PTA, the whole basis, the foundation of that law is fraud.

There are numerous issues with regard to the PTA. Hon. Minister I can tell you very responsibly, you can’t amend the PTA, you have to repeal the PTA, the whole basis, the foundation of that law is fraud, I have said this several times, it was brought for just 6 months, but still bears the name temporary provisions act brought is 1979. You have to repeal it.

We also, agree that all the countries in the world has laws to deal with terrorism. We don’t say no to that, we don’t say no to that. But that must be done without……. I agree with you that there has to be a balance, but the balance has to be struck properly. You can’t have article 11 in our constitution and then allow even one person to be tortured. I agree with you on that.

It’s not the numbers… but you did speak about the numbers about the disappeared. And I heard you say that people are bringing allegations that thousands of people have gone missing. People are not making allegations, your own government appointed commissions have said so, leave aside what we say, your own commission Paranagama commission says more than 20,000 people, what have you got to say about that?

Your own commission, Udalagama commission says with regard to just the two matters that they inquired into, the 17 aid workers in Muttur and the 5 students in Trincomalee – they have said that.

Your own Commission: the LLRC…

All those three commissions were appointed by President Mahinda Rajapaksa. Have said that persons who were surrendered to the security forces at the end of the war have gone missing, they’ve given the number; 3000-odd. Your own commissions!

We had nothing to do with those commissions. When your own commissions have said that tens of thousands of persons have gone missing and not one has been traced so far, not one has been prosecuted for that! What’s the point in saying “People are saying?” You have said it, you have admitted to it. Why can’t you investigate one case?”

11 young people were abducted by personnel of the Navy in Colombo, not because they were involved in anything but for ransom, senior Naval officers were involved in that. You interfered in that, you go after investigative officers in that case, you waylay that case and then you preach sanctimoniously here? That this government will protect the dignity of every one? How do you make these ends meet then?

If you are sincere, I am saying as all involved in that was not sincere, this is just window dressing to the European Union. It’s too late! And I want the European Union and the entire world to know that this is just eyewash! A very week and feeble attempt by this government to try to show that you are International Human Rights Compliant, that will not work. Unless you make a genuine turn, you will not succeed in this false effort of yours.