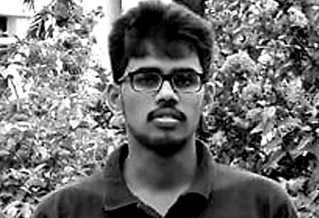 Washington, D.C. – On September 7, 2021, Freedom Now filed a petition with the UN Working Group on Arbitrary Detention on behalf of Sri Lankan poet Ahnaf Jazeem. The petition argues that Sri Lanka’s detention of Jazeem is related to the legitimate exercise of his right to freedom of expression, a direct violation of his rights under the International Covenant on Civil and Political Rights and the Universal Declaration of Human Rights.

“It is unconscionable that Ahnaf Jazeem has been imprisoned for 480 days without charges,” said Freedom Now Legal Officer Adam Lhedmat. “Ahnaf’s poetry should be celebrated, not condemned. His wrongful detention is indicative of Sri Lanka’s blatant misuse of anti-terrorism laws to criminalize peaceful expression. We are confident that the UN Working Group on Arbitrary Detention will conclude his fundamental human rights have been violated and he should be released immediately.”

Prior to his arrest, Jazeem had been employed since July 2019 as a Tamil language and literature teacher at the School of Excellence, a private international school in Puttalam, a city on the northwest coast.

Since his enrollment in university, Jazeem has published award-winning poems and short stories under the pen name Mannaramuthu Ahnaf. In 2017, he published his first book of poetry in Tamil – Navarasm. The book touched on a wide range of issues within public and private life, such as religion, love, drugs, and Islamic history. The publication was launched at Jazeem’s university with nearly 1,000 people in attendence.

On May 16, 2020, authorities from the Counter-Terrorism and Investigations Division arrested Jazeem under the draconian Prevention of Terrorism Act on allegations of “teaching and the publication of books on racism and extremism to students.” The law allows suspects to be held for long periods of pre-trial detention. Jazeem has been subjected to numerous due process violations during his detention. He was denied access to lawyers for the first 10 months of his detention, authorities have attempted to use access to his family to coerce a confession from him, and a court did not order that he be held in detention until June 2021.

As part of the investigation, the government commissioned a translation of Jazeem’s poetry as only approximately 30% of the population speaks Tamil. Despite an expert analysis, which has been criticized by Tamil language experts, the government has failed to demonstrate how the poem anthology promotes violence. To the contrary, the book includes poems condemning ISIS, declaring that the terrorist organisation has nothing to do with Islam.

Jazeem remains in pre-trial detention in inhumane conditions as of September 2021 without official charges filed against him.