Sri Lanka: Confidence in the electoral system: The Election Commission, the Attorney General and the police 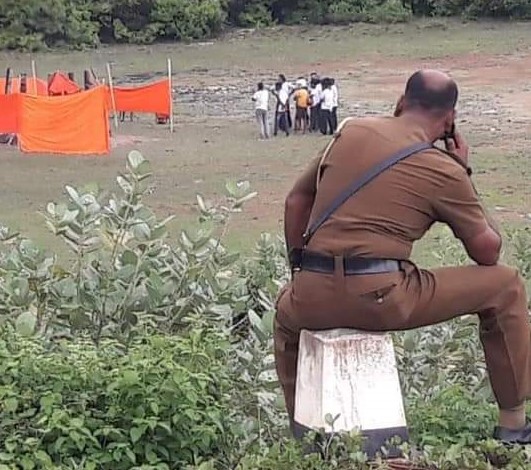 Image: Policeman watching from afar at the illegal cremation of  a Buddhist monk in  Chemmalai, Mullaitivu , violating a court order.

Perhaps the most important election, with the only competition for this title coming from the parliamentary elections, is just around the corner. How well the result reflects the people’s will depends on the free exercise of the people’s franchise, and that depends on how well the Election Commission, the Attorney General and the police do their job. The signs are not good.

During the 2015 elections, a Norwegian Tamil, illegally transporting election material in a government vehicle, was caught with a truck full of illegal notices. He was arrested by the police. Subsequently, a Parliamentarian intervened with the Attorney General, writing the letter produced in this article. It is a brazen attempt to divert the course of the law, with a shamelessness that characterises everything Sri Lankan. The man was out in no time. The same MP, by 2018 a State Minister, was photographed by me campaigning from a temple during the local government elections. If convicted, it meant the loss of political rights. But no prosecution. Every time I ask, I am promised follow-up action but nothing happens. The Election Commission seems unable to hold powerful politicians accountable. 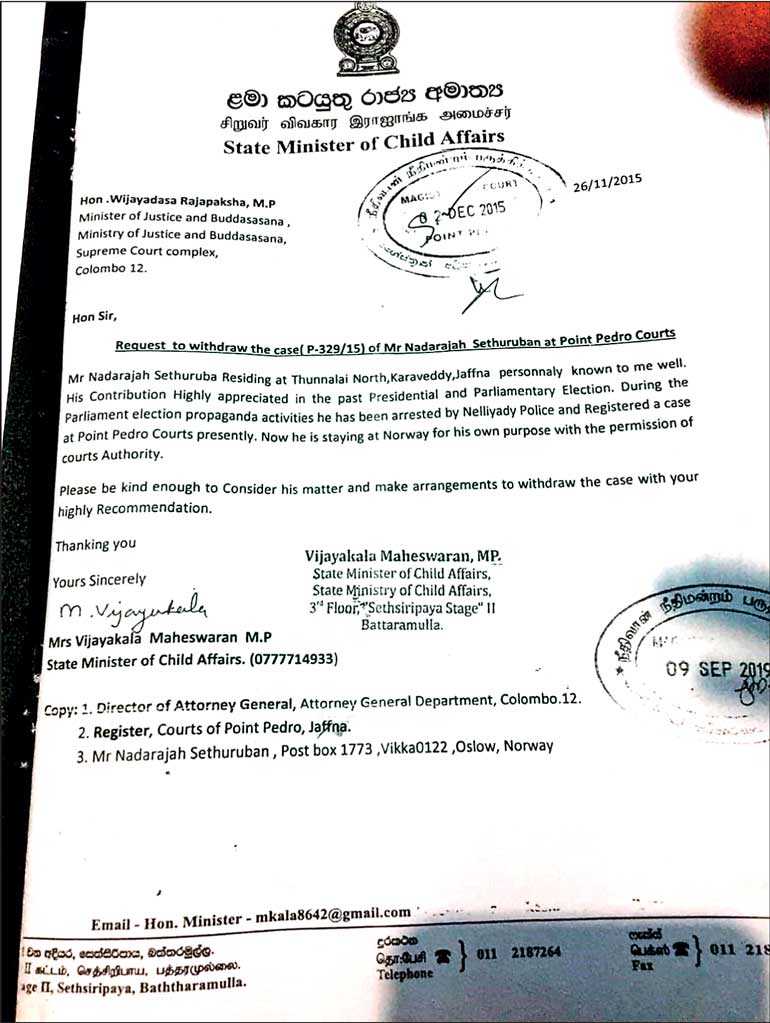 The Norwegian is now back. He has written a scurrilous piece and allegedly demanded payment for removing it from his website. He was arrested again and was out on bail. Reports in Jaffna say he fled bail, returned for his daughter’s coming of age ceremony in Kilinochchi, and was rearrested. His work is important to politicians and it is said that he will soon work for a politician’s re-election.

It is difficult to trust our Attorneys General, who often look to appointments in the Supreme Court and are reluctant to charge politicians and their protégés. This is well-known from the cases that were promised prosecution in 2015 and are now being dusted off shelves because a different Government may soon be in place.

In a situation on 24 September, I found the Attorney General claiming to represent me in the Embilipitiya case when I had given my proxy to a private lawyer whom I trusted. What would have been said in my name I do not know; nor do I know in how many cases I have been represented without my knowledge and proxy.

Worse is the ongoing [kopa_button type=”small or medium or large” color=”yellow or black or white” linkto=”” linktarget=”_blank” ]Neeraviyadi Pillaiyar Temple [/kopa_button]saga that challenges our faith in the police. The Pillaiyar Temple is situated in Chemmalai in the Mullaitivu District. A Buddhist monk by the name of Kolampe Methalangathara Thero had erected a Buddhist temple with State aid on the Hindu Pillaiyar Temple premises. While further construction is restrained by court, Kolampe Thero lived in the temple he had erected while the court proceedings continued. The monk died of cancer a few days ago in Colombo. On 21 September (Saturday) plans were made by his followers to cremate his remains within the temple compound.

Later that evening, I reported these developments to the Election Commission. As told to me by Chairman Deshapriya, he had informed the IGP, who had said he did not know of this problem and promised that he would monitor the situation. In contrast, MP Charles Nirmalanathan said he had reported it to the relevant DIG on 21 September morning itself and he had promised to alert the IGP.

Hindus in the area went to the Acting Magistrate Sutharsan, who issued an interim order at around 1.00 a.m. Sunday, staying cremation until Monday by which point the regular Magistrate and District Judge Lenin Kumar would examine the issues and offer a ruling. Lenin, or his predecessor, had already issued stay orders in the old ongoing case saying no new construction should take place and nothing that violates religious sensibilities should be done at the temple.

However, in violation of the court order, busloads of Sinhalese moved towards the temple premises on Sunday. The police, army and navy moved onto the premises too, ostensibly to keep the peace. When it was pointed out to the police that there was a court order, they claimed not to know Tamil – the constitutional language of administration in the North, but only the armed forces did not seem to know this – so in reality they turned a blind eye and aided those planning to engage in this sacrilege in Hindu law.

By 10.00 a.m. or 11.00 a.m. on Monday, the permanent Magistrate issued an order that there must be no cremation on or near the temple premises and the cremation must be done by crossing the Army camp close to the temple and going farther beyond to the beach.

By then Gnanasara Thero (who had been in jail for contempt of court for disturbing proceedings in trials against those charged with the enforced disappearance of Prageeth Eknaligoda and then released by President Sirisena through a presidential pardon) had also arrived with a further 15-20 Sinhalese. A monk with him, when reminded of the court order, retorted, “Don’t you know this is a Buddhist country where precedence is given to Buddhism?” (The Election Commission is yet to act on a complaint that the UNP promised Rs. 500 million on Buddhist temples during the 2018 elections. This complaint by former MP Sivajilingam has not even seen a preliminary investigation. This was on the grounds that Buddhism has a special place so promising money to Buddhism during elections might be all right.

Disregard for law and order

Within 30 minutes of the court order, the pyre was lit, a mere 100 metres from the Hindu temple.

Some Tamils who urged the police to ensure that the court order was not breached were assaulted by the Sinhalese while the armed forces and police looked on – so I ask again who were they there to protect? Four university students were also assaulted so seriously that two were admitted to hospital. As a result, more students came into the area to protest, making an observer remark that with students entering the scene, the tensions would not abate.

Surely enough, a huge demonstration began in Mullaitivu, with shops and business establishments being shut down. Without precedent, the Government Agent Rupavathi Ketheeswaran, who is the highest ranking government official in Mullaitivu, some District Secretaries and an Acting Magistrate also joined the demonstration because the State seemed to have collapsed with no respect for the law by the police and armed forces. If the IGP had a small measure of prudence and urgency when a real threat of a breakdown was obvious to most, this further estrangement of law-abiding folk from the State would not have happened. The forces of law and order fiddled like Nero, while a people they did not care about were burnt. All protections of law, order and justice had been taken away from them.

In other articles, I have documented how the police reduce charges against politicians, probably taking money or wilting under political pressure. Sometimes even the magistrates do not seem above suspicion as indicated by a Judicial Service Commission inquiry that concluded that a magistrate issued orders without reading the law.

Our country is bordering on moral bankruptcy. Our best institutions, including the press, seem to be in the grasp of Sinhalese chauvinism.

The upcoming presidential elections on 16 November might be our last chance to bring us back from the brink, if we are not already over the precipice. The Election Commission is vested with many powers to halt the downward spiral. It must use those powers wisely and honestly, without fear or favour, to make this an honest election with no privileges to those who hold power, whether political or financial. We need a Government led by those who care for the people and are not intent on enriching themselves while averting justice and staying out of jail.

Courtesy of the Daily FT