Sri Lanka’s HRCSL provides its analysis of the scope of section 3 of the ICCPR Act in the context of recent abuses of the Act. 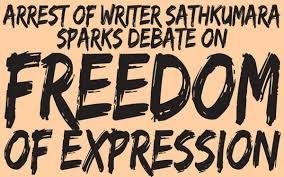 The Human Rishts Commission of Sri Lanka’s (HRCSL) analysis of the scope of section 3 of the ICCPR Act.

The HRCSL is pleased to present herewith the Commission’s legal analysis of the scope of section 3 of the ICCpR Act, No.56 of 2007 (lccPR Act) and its recommendations in regard to the provision,s application.

The commission is of the view that section 3 of the ICCPR Act is an important legal tool in combating hate speech’ As we are aware, hate speech has unfortunately become a conmon phenomenon in the country targeting various groups.

However, the commission observes that the application and enforcement of section 3 of the lCCPR Act has not been done in a consistent and an even-handed manner, and sees the need for greater clarity on the legal scope of the offence recognized by the said provision.

The enclosed document contain ICCPR Act. we would be pleased to provide clarifications, if necessary.

Enclosure: The Human Rights commission of sri Lanka’s legal analysis of the scope of section 3 of the lccpR Act, No.56 of 2007 and attendant recommendations.

LEGAL ANALYSIS OF THE SCOPE OF SECTION 3 OF THE ICCPR ACT. NO.56 OF 2OO7 AND ATTENDANT RECOMMENDATIONS

The Human Rights Commission of Sri Lanka considers Section 3 of the lnternational Covenant On Civil and Political Rights Act No.56 of 2007 (ICCPR Act) as a significant legal framework to address hate crimes. As there is no authoritative Sri Lankan jurisprudence on Section 3 of the ICCPR Act, the Commission has drawn from the discussion surrounding Article 20 of the International Covenant on Civil and Political Rights (the Covenant) i.e. the original Article to which Section 3 of the ICCPR Act gives domestic effect, in order to understand its scope and application, The Commission presents its observations below:

Part 1. lnternational Jurisprudence on Article 20 of the Covenant

Article 20 of the Covenant reads as follows:

(1) Any propaganda for war shall be prohibited by law.

(2) Any advocacy of national, racial or religious hatred that constitutes incitement to discrimination, hostility or violence shall be prohibited by law.

1.1 The relevance of Freedom of Expression

It is recognized by the UN Human Rights Committee i.e. the independent expert body which oversees the implementation of the Covenant (UNHRC) that Article 20 should be read in conjunction with Article 19 of the Covenant which recognizes Freedom of Expression. For example in the ICCPR General Comment No. L11 it is observed that the prohibition required by Article 20 is compatible with the Freedom of Expression guaranteed under Article 19. Further, in Ross v Conada2 it has been held by the UNHRC that restrictions under Article 20 should be permissible under Article 19 as well,

1.2 Elements of the Article 20 Offence

The Commission observes that the aforementioned offence under Article 20 (2) embodies two significant elements:

i. Advocacy of national, racial, religious hatred and

The offence under Article 20 must firstly comprise of advocacy of national, racial or religious hatred. Such advocacy must also constitute an incitement to discrimination, hostility or violence. One element without the other is insufficient to establish liability.

The Covenant does not define the term ‘advocacy’.The Rabat Plan of Action , which is the outcome of a four year initiative by the UN Office of the High Commissioner for Human Rights (OHCHR) to clarify the scope of state obligations under Article 20 of the Covenant, contains a six-part threshold test that has been developed by the attendees of a series of
expert workshops on the prohibition of advocacy of national, racial or religious hatred that constitutes incitement to discrimination, hostility or violence in order to determine the forms of advocacy that constitute incitement that fall within the scope of Article 20.

The test is as follows:

a. Context – The political and social context prevalent at the time of advocacy (for example whether there is existing conflict, a history of conflict, or institutionalized discrimination).

b. Speaker – Whether the person who advocates hatred has a position of authority over the audience (for example by being a prominent public figure, a public official or having a similar
status (e.g.-: a religious leader) or wields influence over the audience.

This does not mean that the Speaker should wield some form of power derived from Public office, or should have social standing. Rather it refers to the command the Speaker has over his/her audience. lt is the advocate’s ability to be persuasive and sway the audience’s opinions. An extent of authority that is so potent as to persuade the audience to engage in an act of discrimination, hostility or violence that results in a conduct harm. While the Speaker/s social standing would indeed be guiding in this regard, it is not conclusive as to the Speaker’s influence.

c. lntent – lf a person voluntarily advocates hate, knowing the consequences of such act and with the knowledge that the consequences would immediately follow, such person has the requisite intent.

Under Article 20, advocacy of national, racial or religious hatred is permissible until it constitutes incitement to discrimination, hostility or violence.

However, not all forms of incitement are proscribed under Article 20.

As per the Rabat Plan of Action, a crucial element of incitement as recognized under Article 20 is intention.

The Human Rights Organization ARTICLE 19 (ARTICLE 19) observes that “the decisive factor should be that a speaker who incites others to discrimination, hostility or violence intends not only to share his/her opinions with others but also to compel others to commit certain actions based on those beliefs, opinions or positions.

a) ln relation to conduct, that a person means to engage in the conduct;

b) ln relation to a consequence, that a person means to cause that consequence or is aware that it will occur in the ordinary course of events.

A mens reo that is less than intent (such as ‘recklessness’ or ‘negligence’) would not, therefore, meet the threshold of Article 20(2).

Content and Form -The provocative nature ofthe content, the nature of the arguments, the mode of expression used, the tone used in the expression etc…

lmminent harm – Reasonable probability that the incitement would cause imminent harm.

ARTICLE 19 observes that actions compelled by the speaker need not actually follow for the speaker to be held liable.

“Nevertheless, some degree of risk of resulting harm must be identified. This means that courts will have to determine that there was a reasonable probability that the speech would succeed in inciting the audience into committing discrimination, hostility or violence against a victim group, recognizing that such causation should be seen to be direct.”

Given below are examples of such prohibited forms of advocacy as broadly identified based on communications received by lnternational Human Rights bodies:

1. Negative stereotyping of individuals based on their nationality, race or religion {for example, public dissemination of the sentiment that all adherents of religion X are terrorists).

2. Encouraging, directing or instructing the public to attack a person/s of a protected group i.e. an individual of a certain nationality, race or religion.

3. Provoking destruction of religious sites, property and livelihoods of a protected group.

4. Exploiting modes of expression (publications, social media etc…) to spread thoughts of hatred and anger against a protected group,

5. lnciting the public to discriminate (for example, by disseminating inflammatory information that provokes the public to avoid entering into business transactions with an individual belonging to a protected group).

Part 2. Observations of the HRCSL with reeard to Section 3 of the ICCPR Act

The offences under Section 3 –

2.1 The Commission observes the Preamble to the ICCPR Act which states that it seeks to give effect to the rights referred to in the Covenant. Accordingly, Section 3 gives effect to Article 20 of the Covenant.

Section 3 (1) – No person shall propagate war or advocate national, racial or religious hatred that constitutes incitement to discrimination, hostility or violence,

Section 3 (2) – Every person who- (a) attempts to commit (b) aids or abets in the commission of; or (c) threatens to commit, an offence referred to in subsection (1), shall be
guilty of an offence under this Act.

Section 3 (3) – A person found guilty of committing an offence under subsection (1) or subsection (2) of this section shall on conviction by the High Court, be punished with
rigorous imprisonment for a term not exceeding ten years.

Section 3 (4) – An offence under this section shall be cognizable and non-bailable, and no person suspected or accused of such an offence shall be enlarged on bail, except by the
High Court in exceptional circumstances.

2.2 The Commission observes that Section 3(1) is an articulation that consolidates subsections (1) and (2) of Article 20 of the Covenant.

Part 3. Recommendations of the HRCSL on the scope of Section 3 of the ICCPR Act

in light of the foregoing, the Commission presents its recommendations as follows:

3.1 ln view of the observations under Part 2 above, the Commission recommends that Section 3 of the ICCPR Act be interpreted in light of the international jurisprudence on Article 20 of the Covenant.

3.1.1 That the six-part threshold test as contained in the Rabat Plan of Action and discussed in Parl L.2.t above be adopted in order to determine the forms of advocacy that fall within
the scope of Section 3.

3.1.2 That advocacy of hatred should not be proscribed under Section 3 unless it constitutes incitement to discrimination, hostility or violence that is intentional.

3.2 That Freedom of Expression and Section 3 of the Act should be balanced:

3.2.3 Consequently, for a Section 3 restriction imposed by the Government to be legitimate it should meet the three-pronged test of legality, proportionality and necessity; a test already incorporated into the domestic fundamental rights jurisprudence (Sunila Abevsekera V. Ariva Rubasinahe, Competent Authoritv and Others)s.

That the scope of Section 3 should not be limited to instances where a group of individuals are acting in concert with a common intention. Even where a single person engages in a hate speech act with the intention of inciting discrimination, hostility or violence and with the knowledge that discriminatory, hostile or violent acts would follow as a consequence, such person should be held accountable.

As per Section 3 (3) and (4), where a peace officer entertains a reasonable suspicion that any person is involved in a Section 3 offence such person can be arrested without a warrant and that such arrested person cannot be enlarged on police bail or anticipatory bail. Bail, if at all, will be granted by the High Court in exceptional circumstances only.

Where advocacy prima facie amounts to an offence under Section 3, such person should not be enlarged citing an alternate offence. For example, a person who incites violence cannot be enlarged on bail on the premise that they were disturbing the peace.

3,6 State obligations under the ICCPR and the interpretation of Section 3 of the Act:

3.6.1 The State has an obligation to protect individuals from incitements to discrimination, hostility or violence by third parties as well as to refrain from engaging in such acts in order to protect rights and ensure equal protection of the law for all,

3.6.2 Where there is reasonable suspicion that a person is committing a Section 3 offence, and public officers with the power to set the procedure under the ICCPR Act in motion fail or omit to enforce the law, such omission shall amount to state inaction which gives rise to a fundamental rights violation (Article 12 (7) of the Constitution of Sri Lanka) as a tacit state approval of hate speech.

Read as  a PDF for foot notes:Letter-to-Hon.-Attorney-General