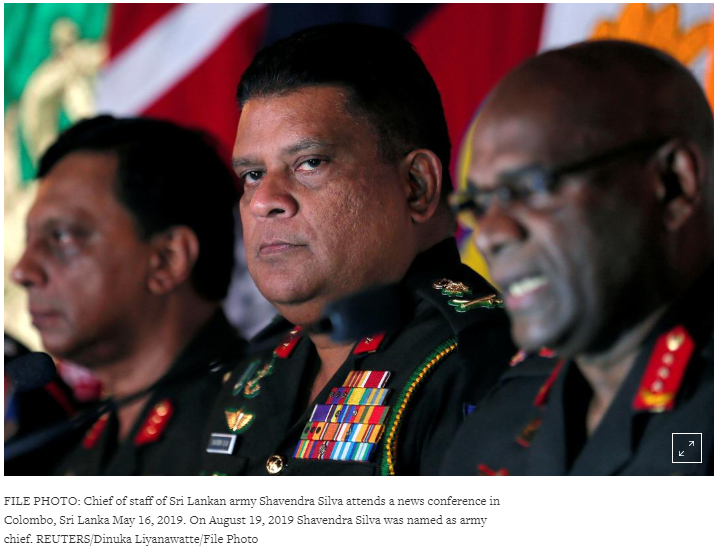 COLOMBO (Reuters) – The United Nations suspended Sri Lankan Army deployments in the world body’s peacekeeping operations after the Indian Ocean island nation appointed a war veteran who has been accused of serious human rights violations, an official said on Wednesday.

Sri Lanka’s president in August appointed war veteran Shavendra Silva as its army chief, drawing sharp criticism from the United States and the United Nations over the appointment of an officer who has been accused of serious human rights violations.

“We have expressed our concern to the government of Sri Lanka over the appointment of Lieutenant General Shavendra Silva to the position of commander of the Sri Lanka Army despite well-documented, credible allegations of his involvement in serious violations of international humanitarian and human rights law,” U.N. spokesman Farhan Haq said in New York.

“In light of this appointment, the U.N. Department of Peace Operations is therefore suspending future Sri Lankan army deployments except where suspension would expose U.N. operations to serious operational risk.”

Silva, 55, is credited with successfully leading an army division against dissident Tamil Tigers in the final phases of the island nation’s 26-year-long brutal civil war.

His victory, however, was highly controversial. Thousands of civilians were killed in the last phases of the conflict, including in areas declared by the government to be a “no-fire zone” which came under sustained army shelling, including hospitals.

A United Nations panel has accused Silva’s division of suspected extrajudicial executions of unarmed rebels in the final week of the war, which ended in 2009, and systematic torture of people in custody.

Silva, who joined the army in 1984 and had been its chief of staff since January, has denied the accusations.

The United States expressed its disapproval of Silva’s appointment in a strongly worded statement and said “the allegations of gross human rights violations against him, documented by the United Nations and other organizations, are serious and credible.”

Silva was named head of the army after the term of the previous chief, Mahesh Senanayake, ended in July.

The Sri Lankan president’s office and the military media unit did not immediately respond to requests for comment on the criticism.

Reporting by Ranga Sirilal in Colombo and Michelle Nichols in New York; editing by Jonathan Oatis