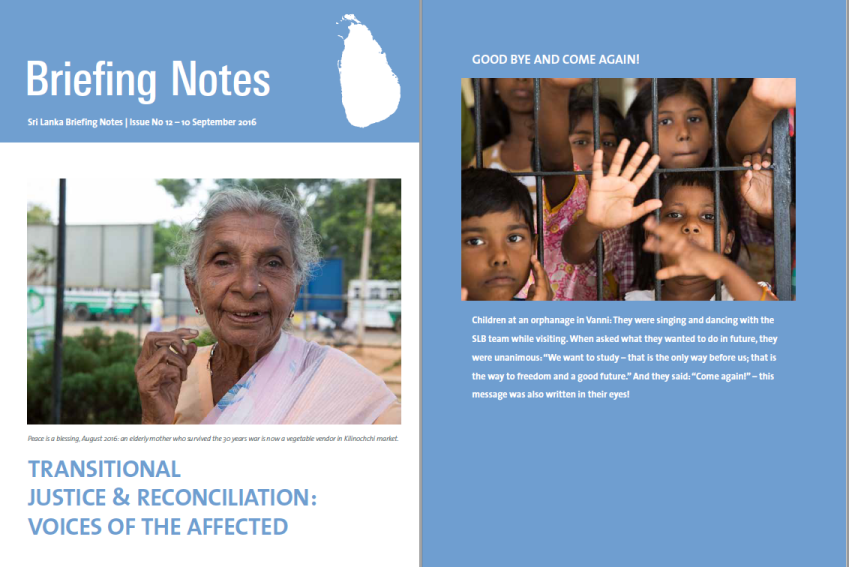 A number of positive measures have been taken by the current Government of Sri Lanka (GoSL) to further reconciliation and to facilitate transitional justice in Sri Lanka. The most far reaching democratic achievement under the new Government was the establishment of a number of institutions1 which exercise checks and balances on the State power.

The most recent but also the most important such institution in terms of transitional justice is the Office of Missing Persons (OMP). The consultation process conducted by the Consultation Task Force on Reconciliation Mechanisms (CTF) is another welcomed development. On the top of all this, the democratic space created by the current regime remains the most beneficial factor in campaigning for and achieving rights.

Despite these efforts, many issues are unresolved and demand the Government’s attention: Many issues have not been addressed sufficiently so far, such as: continued militarization and surveillance, as well as land occupation in the North; nonimplementation of the bi-lingual language policy; failure to repeal the Prevention of Terrorism Act (PTA); issues of political prisoners; and challenges faced by former LTTE combatants, war widows, and people living with disability. All these issues hamper building the trust among the population. Trust, however, remains the prerequisite to enable lasting reconciliation and democratization.

In addition, many challenges that people in the North face in their day-to-day life have not been resolved. Allegations of State-sponsored Sinhala settlements and the establishment and/or expansion of Buddhist temples in areas where there is no civilian Sinhala population continue to surface.

A disproportional number of huge military cantonments still exist in the North and East. The insensitivity and inertia in regard to these burning issues of the Tamil people put in question the genuineness of the Government’s commitment towards the transitional justice process.

Currently, the GoSL’s efforts concerning transitional justice appear to polarize the Sri Lankan society. The Tamil community, especially in the North, seem to favour an international involvement to resolve these issues while the majority Sinhala community rather want a domestic investigation.

The Government’s commitment to Resolution A/HRC/RES/30/1 has been criticized by the former President and his supporters as acts that endanger national security and seek revenge from war heroes. Extreme nationalist media aggravates this situation by campaigning against transitional justice and propagating hate along racial and religious lines. The Government has so far not given enough attention to the issues of a polarized public opinion and of hate-inciting extremist forces. Furthermore, the GoSL has been lethargic not only in countering Rajapaksa’s triumphalist war propaganda but also in raising awareness among the people on its own transitional justice process. Even the country-wide consultations carried out by the CTF have not been publicly supported by the Government.