Sri Lanka: Barbaric behaviour [of the IGP] cannot be dismissed as ‘not quite torture’ 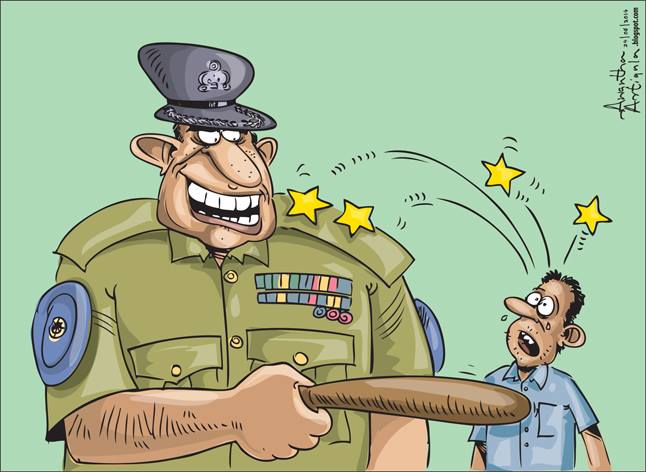 That Sri Lanka’s new Minister of Foreign Affairs has chosen to flippantly wave aside the stupefying conduct of the Inspector General of Police (IGP) in grabbing an employee by the collar, threateningly raising a hand and berating him, is unfortunate to say the least.

Not reflective of the law

The IGP’s fury had been occasioned by the failure of a hapless lift operator to participate in compulsory meditation sessions ordered by him. Judging from the video footage, it is the IGP who seems to need supervised and strictly enforced intensive meditation, not his helpless employees. I will return to that salutary point later.

But when questioned on this incident, the new Minister is reported to have said days into assuming his new post, to quote, “torture is something that will severely injure a person….but (this) was a person abusing a person; you can’t equate it to torture” (Economy Next, August 19th 2017). If these remarks are correctly attributable to him, the Minister (himself a lawyer of repute at a point) is in need of a summary brief on the jurisprudence regarding ‘torture, cruel, inhuman or degrading treatment’ prohibited by Article 11 of the Constitution. This claim is quite contrary to the weight of precedent on the matter.

The Supreme Court has held that it is well settled law that the constitutional prohibition will apply to physical as well as psychological trauma. Extreme pain of mind and the circumstances of the case or in other words, the standing of the torturer and the powerlessness of the victim are key factors. In one 2003 precedent for example, verbal abuse meted out by members of ministerial security in forcing a lawyer, his wife and their baby to get out of their vehicle was ruled to attract the constitutional bar (2003, 1 SLR, 270). The Minister would be well advised to freshen up his knowledge of the legal bar.

Following the example set by the IGP

Indeed, this news report is perturbing in more ways than one. The Minister is also reported as referring the matter to the ‘independent police commission’, saying that ‘any disciplinary action against the police chief’ is outside his authority. However, it is a well-established fact that under the 19th Amendment, the IGP does not come within the purview of the National Police Commission (NPC). This was a much critiqued limitation of the first NPC as well under the 17th Amendment.

Notwithstanding, apart from the law and the knowledge (or the absence) thereof, let us assess this IGP against standards of ordinary decency, if this is something which we still recall. To put the discussion in context, this is an IGP who once broke down in tears before the public. It is also this same IGP who was captured on television cameras abjectly promising the Minister of Law and Order that he would not take steps against a ‘favourite’ of the previous Government.

Yet and as aggravating as such conduct may be, this pales into insignificance when compared with the current incident a few months ago. Is this the standard of propriety expected from the head of law enforcement? What if ordinary men or women go around grabbing people with whom they disagree with, by the collars and intimidating them for whatever perceived slight or dereliction of duty? What about the Juanis Singho who waits patiently in a government office for hours while the staff stands around gossiping and drinking cups of tea? Would that rightly infuriated citizen be justified in taking the culprits by their collars or sarees as the case may be and threatening them?

Or venturing into the province of law enforcement itself, when police officers refuse to record statements in violation of the law and a complainant uses strong language, the likelihood is that he or she will be put feet first into the police cell and face criminal charges the next day. If so, then why is the IGP protected from the consequences of his actions?

Safeguards not meant to enable jesters

Strengthening removal procedures of high-level public servants like the IGP and the Attorney General by consequential legislation after the 17th Amendment to the Constitution was following hard advocacy to reform the law, upheld by numerous judgments of the superior courts. This was due to the need to safeguard the independence of the offices.

But this safeguard is not meant to enable individuals holding such office/s to behave like court jesters. Certainly the conduct of this IGP, held out as an appointment that ran the gamut of checks and balances under the misleadingly feted 19th Amendment to the Constitution, only illustrates the colossal failure of that exercise.

Moreover it is sardonically amusing that the IGP’s fury is absent in even an iota thereof when his police officers abstain from performing their duties or when politicians call upon him to protect their favorites. Rather, a pitiful subordinate has to face his wrath. Compulsory meditation sessions may certainly benefit individuals. However the very idea that it will be a panacea to Sri Lanka’s systemic failures, particularly in law enforcement is a cruel mockery. In the first place, the IGP should properly enforce the gargantuan and comprehensive Police Departmental Orders that have been meticulously drafted from decades ago by those with expertise. If implemented to the letter, these will suffice to address the lack of discipline of his officers at least as a start.

One incident too many against the IGP
On his own part, the new Minister of Foreign Affairs needs to be a tad more cautious in his pronouncements. Barely two years ago, he resigned from his then portfolio as Minister of Law and Order when he waded, arms flinging (metaphorically speaking) into a highly unwarranted controversy in Parliament. This was when he defended his onetime client, maritime security firm Avant Garde with scant regard for serious conflict of interest questions.

Previously, this column has reflected on the games of ministerial musical chairs that the Government delights in. Resignations of ministers are paraded as some great sign of accountability and these same gentlemen are later brought back quietly into the Cabinet after the fuss dies down. Such cynical games are simply not acceptable. And the Government will be keenly watched on this count. Its waning popularity, which is a matter of obvious fact outside the rarefied ‘Colombo bubble’ as it were, can only be further negatively impacted.

In the meantime, the law must work against the IGP as it would against any other individual. Simply put, this is just one reprehensible incident too many.