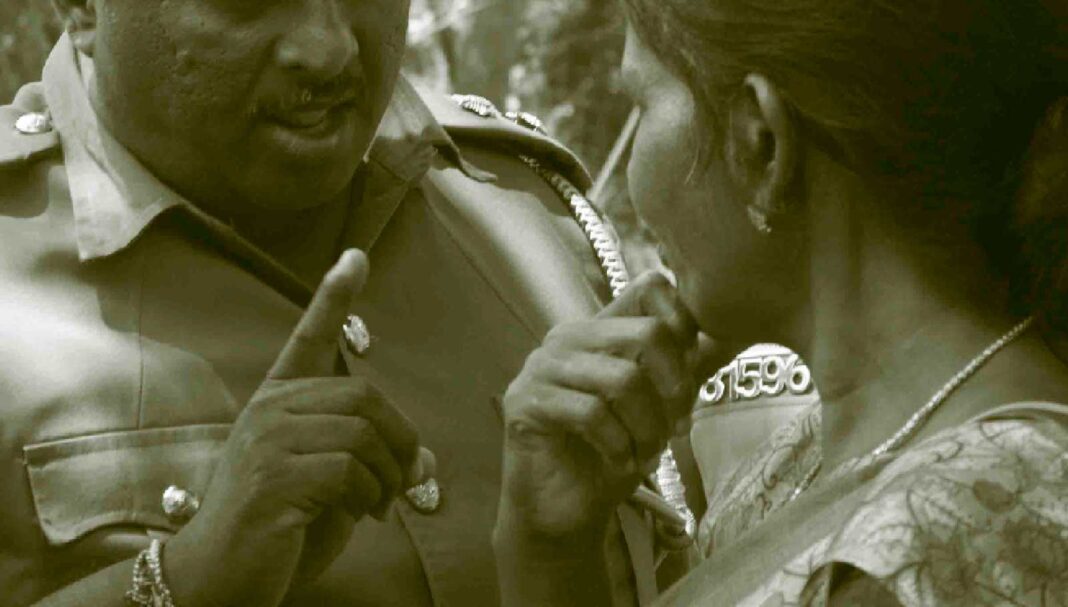 Image: Police warning communities protesting in front of an army camp demanding release of their land in Keppapulavu, Mullaithivu.

The Oakland Institute has sent their responses to Human Rights High Commissioner with regards to  the August 27, 2021 statement from the Sri Lankan Ministry of Foreign Affairs on the progress made on peace and reconciliation. It deals with issues related to the North and East of the country only.

Re: Oakland Institute’s response to the August 27, 2021 statement from the Sri Lankan Ministry of Foreign Affairs on the progress made on peace and reconciliation

On August 27, 2021, the Sri Lankan Ministry of Foreign Affairs released a statement on the progress made by the government of Sri Lanka on peace and reconciliation in advance of the forthcoming UN Human Rights Council session.

The Oakland Institute, which has monitored land occupation, militarization, and resettlement in the North and East of Sri Lanka since 2014, deems necessary to respond to the statement and share findings of our research which we hope will be relevant to your office.

If the government figures are correct and that about 90 percent of the land has been released, around 340,000 acres of land in the North alone must have been occupied by troops in the past, and more than 300,000 of these 340,000 acres must have been released. Details of where these lands were occupied, when they were released and to whom should be made public by the government. In addition, a large number of military settlements are reported to have been set up in the dense forests — these are not included in these statistics.

2. New land acquisition activities
The government does not mention in its statement the new land acquisition activities that are underway. According to information obtained through our research, the government’s intention to eradicate the history and culture of the Tamil people is made clear by the activities conducted through different departments. The state machinery is in full swing to convert historic lands, monuments, and places of worship of the Tamil people to Buddhist temples, Buddhist culture, and practice — at a greater pace than it was in 2015.

The government is expropriating private and state land for distribution to Buddhist temples through gazette notifications. In the Kuchchaveli DS Division of Trincomalee District, 340.33 acres of land were leased to seven Buddhist institutions for religious activities through a gazette notification issued on October 2, 2020. Land grabbing under the guise of archaeological excavations has also increased in recent months throughout the North and East. In the Mullaitivu District, the Forest Department has expropriated 32,110 acres of land and the Wildlife Department claimed 23,515 acres. The Archaeological Department has seized 202 acres and the Mahawali Authority has taken 4,368 acres. Since the end of the war in 2009, 67 Buddhist temples (viharas) have been set up in the Mullaitivu District alone under the Archaeological Department.

4. Military Occupation of the North and East
The military continues to occupy the North and East at an extreme degree — with roughly one military personnel for every six civilians — severely impacting the livelihoods and fundamental freedoms of the local population and further deteriorating living conditions on the ground. The Sri Lankan Army has seven Regional Headquarters — of which five are located in Jaffna, Kilinochchi, Mulaithivu, Vavuiniya, and Trincomalee in the Northern and Eastern Provinces.

The Army, which is stationed on civilian lands, cultivates and harvests these lands and sells the produce to the landowners. The military continues to run resorts and multiple shops. At the same time, there are a number of high security zones under military control, which prevent the resettlement of the Tamil population displaced during the war. In particular, Valikamam North of Jaffna District, which has been allowed for resettlement, continues to have large military camps and bungalows on private land, and people have been denied access to many areas.

While the Sri Lankan government has repeatedly stated that the LTTE poses no more threat to national security, the massive military presence provides security for Sinhalese settlements while facilitating the Buddhization process and keeping the population in the North and East under constant repression and intimidation.

5. Continued Sinhalese Colonization
Whereas the government’s statement details a number of measures taken by the Office of National Unity and Reconciliation, the continuous Sinhalese colonization of North and East raises serious concerns about the government’s commitment to the declared goals of this office.

The Oakland Institute’s researchers witnessed first-hand the massive deforestation in Vavuniya and Mullaithivu Districts in order to settle the Sinhalese population from the South under the Kivilu Oya project. Many other areas under the Nedunkerny divisional secretariat area in Vavuniya District, including the Vedivaiththa-kallu GN division, have been deforested and an estimated 2,000 Sinhalese have been settled in the past few years. Steps are being taken to settle 3,000 more Sinhalese in these areas and 2.5 acres of deforested land is being provided to each person. Incentives of up to 800 rupees [~US$4] per family per day are provided to prevent the settled people from returning to their native places. Similarly, more than 4,000 Sinhalese were settled in the Weli Oya Divisional Secretariat between 2012 and 2017, and 11,639 acres came under the control of the Divisional Secretariat.

Sinhalization of Vavuniya and Mullaithivu Districts is being further extended under the guise of the Malwatu Oya irrigation projects. To implement this scheme, the Mahawali Authority has acquired 1,100 acres of land, and as a result 450 Tamil families live with the fear of displacement from their native place at any time in Cheddikulam Divisional Secretary area in Vavuniya. The local communities informed the researchers that although alternative lands were to be provided to them at Kappachchi Kulam in Vavuniya, the land was degraded and could not be used for anything. Likewise, under the Mahavali ‘L’ Zone Kivilu Oya irrigation project, over 3,000 acres of land were expropriated by the government through the gazette notification in 1988 and 2017 in the ancient Tamil village of Thenaimaravadi and other close-by villages in Trincomalee District, which geographically connects the North and East. Efforts are also being made to establish two new Sinhalese colonies in the vicinity of Thenaimaravadi with the support of the troops.

Since the end of the war, large numbers of Sinhalese have settled illegally in Nayaru, Kokkilai, Kokkuttoduwai, and Karunattukkeni of Mullaithivu District connecting the Eastern Province with the Northern Province. Tamil politicians allege that the Mahaweli Authority has illegally issued land permits to the settlers.

Statistics provided by the former Minister Akila Viraj Kariyawasam during a question answer session in Parliament on May 3, 2017 demonstrate the extent of Buddhization in the North and East, in the guise of archaeological preservation. According to the Minister, in 2017 there were 131 Buddhist temples (viharas) in the Northern Province under the Archaeological Department. Since then that number has grown.

The above facts detailed in our March 2021 report demonstrates that the government’s activities align with the characteristics of an ethnocratic state aiming to eradicate the history and culture of the Tamil people and maintain the supremacy of the Sinhalese nation across Sri Lanka. Activities to create this ethnocratic state have gained momentum since the Rajapaksa regime took office in 2019, thereby creating a situation that is detrimental to the country’s stability, reconciliation, human rights, and peace.