In support of religious minorities, rule of law and Lakshan Dias 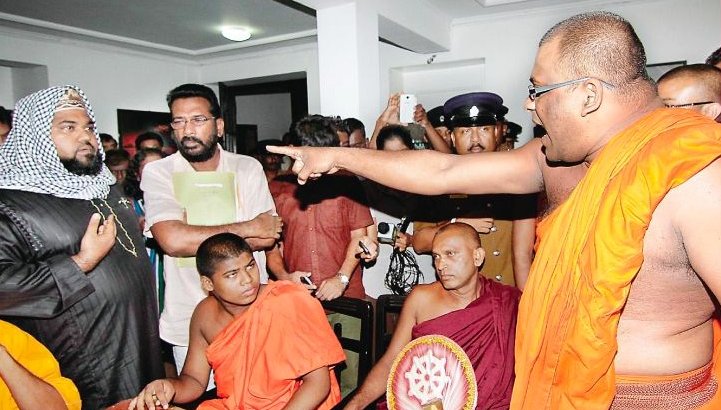 Religious minorities in Sri Lanka – particularly Muslims and Evangelical Christians – faced serious persecution under the Rajapakse Government, which has continued even under the Sirisena-Ranil Government. The Catholic Archbishop of Colombo, who has been hostile towards Evangelical Christians (a numerical minority amongst Christians), now appears to be assisting this Government’s approach of denying the actual problem and attacking those who are attempting to highlight the gravity of the problem. The latest victim is well known human rights lawyer and my good friend, Lakshan Dias.

Given the latest statements from the President and the Minister of Justice, and the general lack of focus on violations of religious rights of Evangelical Christians, I will focus on violence directed towards them (Evangelical Christian) in this article. Some of the systematic violence directed towards the Muslim community has been already well documented.[1]

On 27 May 2017, the National Christian Evangelical Alliance of Sri Lanka (NCEASL) issued a press release, expressing concern about increasing attacks on religious minorities in Sri Lanka.[2] They cited over 20 incidents of violence and intimidation against Christian places of worship across the country in 2017 and over 190 incidents of religious violence against churches, clergy and Christians since 2015. Many of these incidents have been documented on the NCEASL website.[3] The NCEASL press release also highlighted the “alarming increase in the number of incidents led against Muslims”.

On 31 May 2017, the Chairperson of the Human Rights Commission of Sri Lanka wrote to the President, drawing his attention to the “spate of attacks on places of Christian religious worship in the recent past” and expressing grave concern about acts of violence and aggression targeting the Muslim community.[4] The Commission requested the President to “give urgent directions to Ministry of Law and Order and the Inspector General of Police to take all necessary action against the instigators and perpetrators of violence and hate speech targeting the Muslim community as well as other religious minorities.” This clearly doesn’t seem to have happened.

Lakshan’s brave expose and reprisals from President and Minister

On 14 June 2017, during a the TV talk show titled “Aluth Parlimenthuwa (new parliament)”, Lakshan highlighted that Muslim and Christian places of worship are under attack and that 195 attacks against Christians have been reported since 8 January 2015.[5] Lakshan has been a determined and long standing campaigner and advocate on the rights of religious minorities. He often travels far to rural areas, interacts with victimized communities, publicizes their plight, and appears in courts across the country on numerous cases, during this Government and under the previous Government. Although he was referring to the NCEASL report, he is personally aware of many such incidents.

His comments on the TV talk show, especially his candid assertion that Buddhist Monks are behind some of these attacks, drew immediate and angry reactions from a hostile anchor and two other panelists. And within days, it also drew negative reactions from President Sirisena and Minister of Justice and Buddhasasana, Wijeyadasa Rajapakshe, both of whom were quoted on primetime news of government TV station, ITN on 17 June 2017.[6] President Sirisena said that he had called the Catholic Archbishop of Colombo, Cardinal Malcolm Ranjith, and asked from him about attacks on Catholics/Christians (although Lakshan never mentioned attacks on Catholics in the TV talk show). According to President Sirisena, the Cardinal had said that there had been no such attacks. Minister Wijeyadasa misquotes Lakshan as having said 166 attacks against Christians in recent days of this year (what Lakshan actually said is that there have been 195 attacks between 8th January 2015 till todate[7]). The Minister then goes on to say that the Cardinal had claimed no such incidents have happened in Sri Lanka.

Complicity of the Cardinal

The Cardinal on his part has accepted that he doesn’t know that Churches have been attacked to this extent and claims he doesn’t know where this data comes from.[8] This is despite NCEASL incident reports being available publicly for many years, their 27th May 2017 press release and the open letter from the Human Rights Commission etc. The Cardinal’s claim that he is not aware of such large numbers of attacks against Evangelical Christians is difficult to believe, and is likely to be an attempt to sweep these incidents under the carpet, or justify them, given his hostility towards Evangelical Christians. If he is actually ignorant, that shows an extraordinary degree of insensitivity to the rights of religious minorities in Sri Lanka and towards a minority group amongst Christians. His hostility towards some non Catholic Christians is apparent as he refers to them as “fundamentalist Christian groups”. He acknowledges that these Christians may have faced persecution, and that he doesn’t know whether such persecution has been in context of them (fundamentalist Christian groups) building “things like new churches” or trying to “recruit members in areas they had no members”. Cardinal appears to have conveniently forgotten that that for centuries, in Sri Lanka and beyond, thousands of Catholics have been recruited from areas there were never Catholics and that “things like churches” have been built across Sri Lanka by Catholics, including in areas where there had never been Catholics historically.

The President and the Minister appear to be ignorant of the fact that there are many Christian churches in Sri Lanka, and that the Cardinal is only one of the leaders of one of these Churches, the Catholic Church. It’s noteworthy that the Cardinal himself acknowledges that he is only in charge of Catholics in the Western Province (Colombo Archdiocese).[9] There 11 other Catholic dioceses in Sri Lanka led by different Bishops in the other 8 provinces in the country, and there are many other non-Catholic, vibrant Christian communities across the country. Given his limited mandate even within the Catholic Church, his open hostility towards other Christians and his stated ignorance, Cardinal is indeed a very poor choice to consult on matters affecting Christians in Sri Lanka. Indeed, while recognizing Christians as being a numerical religious minority in Sri Lanka, we also need to recognize Evangelicals Christians as a marginalized numerical minority within the Christian community in Sri Lanka, persecuted also by some Catholics, who are the majority Christian community in Sri Lanka.

It appears that both the President and the Minister had not made any effort to contact the NCEASL, even though Lakshan had cited the NCEASL as the institution which had documented the 195 attacks. If the President and the Minister had looked at the NCEASL press statement and incident reports on their website over the years, they would have got a wealth of information about attacks on Evangelical Christians under their watch as well as under the Rajapakse Government. Furthermore, the comments by the President and Minister make no mention of whether they made inquiries with other institutions – such as the Human Rights Commission and the Police – about complaints made to them.

State and Police complicity and refusal to act

An examination of documented incident reports by the NCEASL[10] indicates a range of incidents such as arson, demolition of churches, damage to property, physical assault of clergy and church members causing serious injury, death threats, intimidation, discrimination, forced displacement, and forced closure of churches. Amongst the perpetrators are Buddhist Monks, State officials and Police officers. Police officers have been known to compel Protestant Christian pastors to discontinue religious worship activities.[11] A Police officer, a Hindu religious leader and other community members had also denied burial rites to an Evangelical Christian in a public cemetery.[12]

A common theme in incidents is the seeming reluctance of the Police to act against suspects infringing on the rights of religious minorities. This reluctance appears to be due to influence and pressure exerted by local Buddhist monks, government officials, and politicians. For example, there has been much said and written about the arrest warrants and non-arrest of errant Buddhist Monk, Gnanasara Thero of the BBS, so I will not comment further on it.

Although Sri Lankan law does not require the registration of religious places of worship for any religious body, a circular in October 2008 issued by the Ministry of Buddha Sasana and Religious Affairs demanded that all “new constructions” of places of worship should obtain approval from the said Ministry. This has not been withdrawn by the current Government. Since the introduction of the circular, Christian Evangelical churches have faced routine harassment, including forced closures by local government authorities who claim such places of worship as not ‘recognized’ or ‘registered’ with the government. Refusal of ‘recognition’ by the state has deprived thousands of Christians of their right to practice their religion. THE NCEASL incident reports indicate that after this Government came into power, more than 50 incidents involving local government and law enforcement officials involved the use of the October 2008 circular to infringe on the rights of Evangelical Christians. The October 2008 circular appears to be used to target the numerically smaller Christian churches in Sri Lanka and not the Catholic and other numerically larger and politically influential churches.[13]

Perhaps the most outrageous parts of this drama is the public threat by the Minister of Justice and Buddhasasana to take legal action to remove Lakshan from the legal profession, unless Lakshan apologizes for his comments within 24 hours.[14] Given that a Minister has no role to play in a process of the dismissal of a lawyer, this is clearly a political threat from the Minister.

I am amongst the many victims of injustice on whose behalf Lakshan has advocated in and out of courts. It is left to be seen if some of the many Christians and others Lakshan has defended, campaigned, and advocated for, will stand by Lakshan. And whether and to what extent the Bar Association in Sri Lanka, religious groups, media organizations and others concerned will respond to this threat, which appears to be a threat not just to Lakshan, but to the legal profession as a whole as well as to free expression, religious freedom and the rule of law.

Ruki Fernando is a member of the Justice, Peace & Integrity of Creation Commission of the (Catholic) Conference of Major Religious Superiors (JPIC-CMRS) and the Ecumenical group, Christian Solidarity Movement (CSM).

[13] The majority of Christians in Sri Lanka are Catholics. The Catholic Bishops are generally recognized as their leaders and have access to powerful politicians. Catholics and Christians in the Churches who are members of the National Christian Council (NCC) are also generally recognized by the government as legitimate and “de-facto” Christians / Churches. But Christians belonging to numerically smaller Churches, many of whom are members of the National Christian Evangelical Alliance of Sri Lanka, are often not recognized by the government and not given opportunities in representative bodies and consultations, even though several of these churches are legal bodies incorporated by acts of parliament.