Gotabaya’s security Is Not a Matter for Media – Defence Secretary 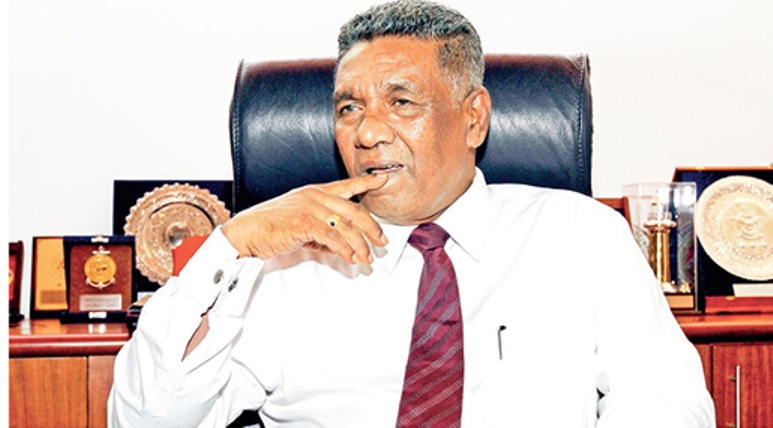 During the war the security forces took over several thousand hectares of land from civilians and turned them into High Security Zones. While a substantial amount of land has been returned, this is an issue which is still being discussed in many arenas, including the UNHRC. What is the latest with regard to the military releasing land to the civilians?

The Army has released quite a bit of land, but the perception of the international community is that the Army is not doing much?

A. Yes, we are doing a study on this matter. It’s a technical study conducted by the Defence Ministry. We will be using that outcome to see that whether we have sufficient numbers and detachments there, so that we can assess the security of the country.

What about the communication aspect of this? The military may engage in a lot of programmes, however, if the people of the country and outside the country are not aware of this, especially in matters pertaining to land, won’t there be miscommunication of sorts?

A. We do communicate and inform whatever we are doing. Yet, we cannot exaggerate what we are doing either.

How do you communicate these to foreign countries and foreign observers and other stakeholders?

A. With regard to these stakeholders, I don’t know what their agenda is. But the government’s agenda is to release land as much as possible, particularly the private lands which belong to the people as quickly as possible. We are of course doing this. However, there are certain constraints in doing this too. To relocate the military will cost us some money, and we have to find money through the Treasury and we are doing so. But we don’t give much publicity. We will release whatever the details that we have, by the political authority, as well as the administration. With regard to their perception, well they are trying to find fault with the government and the military and make subjective statements related to that. We take it with the right spirit and continue our efforts towards reaching reconciliation among the communities in those areas.

There was an advertisement on the paper which indicated that the Defence Ministry is going to start a new think tank called INSS. Have you started work on that already?

A. We have already started it. The Cabinet has also approved it. It’s called the Institute of National Security Studies. This is to do research on security aspects. We will be recruiting some people, and commence research on related security matters.

Do you have a special focus for this institute?

A. I think all security related matters will be looked in to, including national and international activities of different countries, and matters related to our country as well as aspects that affect our security. This will be our focus.

When you talk about security, do you also focus on energy security as well?

A. When you talk about security it has a broad meaning. There is social security, financial security, economic security and political security, in fact all general aspects of life needs some kind of security. Therefore, we will look into these aspects and advise respective line ministries on how they should go about and do it.

There was a news article which said that we are going to buy an aircraft from Pakistan. Is it true?

No decision as such has been made to purchase from one country?

A. No. Not yet. It will be done based on the procurement procedure, by calling for tenders and so forth.

You mentioned improving air defence and training. Of course training is important, much more important than that during the war times. But do we really need to invest a quite bit more money on new aircraft? Should we not use that money on intelligence, training and etc?

A. When you have an Air Force, a Navy, or an Army they should be fully equipped to face any security situation. Therefore, we cannot say that because there is no war situation, we may not have any security threat. Therefore, we have to be ready. Thus, this also means that we need those military equipment.

According to your opinion what is the biggest security challenge Sri Lanka faces?

A. We are thinking of Indian Ocean security, this is not only for Sri Lanka, but also for the whole world. Quite a number of ships are passing through the Indian Ocean along the southern tip of Sri Lanka. We need to have a secured sea line of communication and trade. So that is one of the challenges we have to face. The other aspect depends on how we should take action on the funds of the reconciliation, which encompasses the releasing of lands and withdrawing from some of the businesses that Army was doing in the past. We have done quite a lot now. These are our security challenges. Other than that we have a problem with illegal fishing which we need to address.

Do you consider radicalization as a security threat? There are lots of reports about ISIS, and through the internet the people go through various websites and become radicalized. This is a phenomenon we see all over the world. Apparently some in Sri Lanka had also left to join ISIS, do you see these as challenges, too?

A. I don’t want to make much comment on radicalization. I don’t even want the media to talk about it because we are a neutral country to all of these things. We don’t take any side, but we are cautious and careful about our country. My advice is that we shouldn’t discuss this matter.

I understand it’s a sensitive matter. But we live in a society where there is so much news reports saying that there is a threat. What is your view?

A. Let the government and the security look after that matter. I think the media should keep away from these things. The way that the media is handling this now, take a newspaper and its front page all kinds of criminal activities and disasters are being reported. That is the taste of the media. I am sorry about it. Because there are so many other important aspects that are valuable that changes the mindset of the people. So the media is changing the mindset of the people in the wrong direction. It gives a criminal experience to the people. Why would the media want to do that? I have been questioned so much about Gotabaya Rajapaksa’s security. Why does it matter for the media? That is the matter for the government, the Defence Ministry or the security establishment’s concern. But the media is digging into those things and try to flash news. These sometime create a very bad situation among even the international community. If a rape happens the media puts it on the front page, ‘so and so raped so and so’. This culture is not so good; I am saying this not as the defence secretary but as a responsible citizen. If you look at the newspapers of a western country, their front page carries something related to the economy, development and international politics. But our media taste is different. Our media wants to flash only disaster situations. So that everybody will look at the newspaper. When they do that, what happens is that the whole world would think that this country is a place for uncivilized people. Among the criminal incidents and accidents, this is not even 000.1%. That percentage is given 100% publicity in the newspaper. I don’t like the fact that the media is going behind such news. They should look for positive news.

You were talking about the Army withdrawing from certain business they were doing. Are you opposed to Army involving in businesses?

A. Yes, the Army should not do business. They should only look out for their welfare of the officers.

If you look at a country like China, or Vietnam or Indonesia, their armies do quite a bit of business and even the US Army takes building contracts.

A. We do such work for the government, but not as a business. Whenever the government wants certain things to be done, we undertake it. When organizations or ministries make such requests, we take on the work.

Whenever a disaster situation happens, the Army plays quite a big role. During the floods and landslides, the tri-forces took on a colossal task when the people needed it the most. Do you think of focusing more on disaster relief in the future, as would be needed due to climate change?

A. We are giving some special attention to that. But we also have our responsibility to defence. We will be focusing on that mostly. Anyway when a disaster situation arises we will come forward and provide the necessary assistance.

Do you think of climate change as a security problem?

A. Well, it will impact in various ways. Water availability in a country is a kind of a water security. If that is not there due to climate change that is a security threat in terms of water availability. So people will not have water, people will die, not because of war, but because of the lack of water. Similarly, even pollution will have some effect on security. Security is not only about defence against terrorism, but other aspects as well.

After a long time, you are the first civil person to be appointed as the Defence Secretary. What are the aspects you want to address, and how do you think defence will fare in the future?

A. Well, the Air Force has the role of providing air security and we have to protect our Economic Zone and make sure that even in international waters there must not be any transnational crimes, such as drug trafficking, piracy and human trafficking etc. We need to look into those things and we should be equipped for that. We need aircraft; we need ships, offshore petrol vessels and all that we require. The Army also has to be more sophisticated. We need hi tech soldiers. Another area we are looking into is cyber security, with other expert agencies like ICTA and CERT and make sure that cyber security is provided to all our strategic institutions and government bodies.

You said that the security of the Indian Ocean is of great importance. There is a lot of drug trade also going on, including human smuggling. Do you speak to other countries in the region and want to have integrated security plans and work with other nations?

A. Yes. We communicate with other nations. We get security information from them, we share whatever we can share with them and we work in an integrated manner. So we are helping them, and they are helping us.