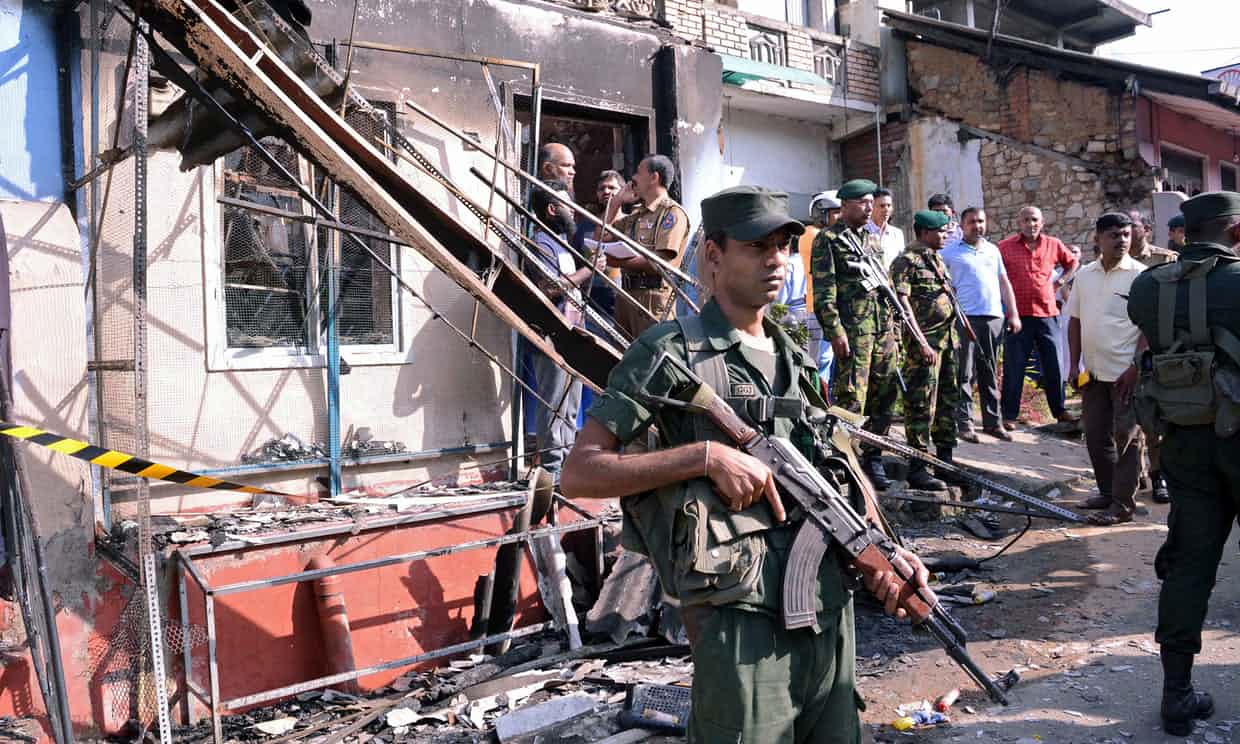 Sri Lanka has imposed a nationwide state of emergency for the first time since the civil war-era in response to days of violent unrest between Sinhalese and Muslim communities.

The special measures permitting soldiers to be deployed in civilian areas will initially apply for 10 days, at which point the deployment will need to be ratified by parliament, said Mano Ganesan, the Sri Lankan minister for co-existence.

“There were concerns that communal violence would spread,” Ganesan told the Guardian. “We don’t want to spread communal disharmony and hate speech.”

Arson attacks and riots that have hit the central district of Kandy in recent days were feared to be spreading after mobs set fire to Muslim-owned businesses and a mosque in the east.

The violence in Kandy is understood to have been sparked when a group of Muslim men were accused of killing a man belonging to the majority Sinhala Buddhist community, who make up about 75% of the population.

Muslim-owned shops were set alight in response and the violence spiralled out of control after monks from hardline Buddhist groups travelled to the town to negotiate the release of the accused men.

When they failed to do so, more fires were lit, dozens of people were arrested and a curfew was imposed in two towns in the district.

On Tuesday morning, the body of a 24-year-old man was pulled from one of the houses set on fire the previous day. His funeral was scheduled for Tuesday afternoon.

The Sri Lankan prime minister, Ranil Wickramsinghe, said the violence in the town “appeared to be systemic and organised” and promised the government would take stern action.

The Indian Ocean island nation has been trying to rebuild its tourism industry after a devastating 28-year-civil war between the government and Tamil separatists in the north. The last state of emergency, in place throughout the war, was allowed to lapse in November 2011.

Tensions between Muslims, who make up about 5% of the country, and the majority Sinhala Buddhist community have existed for decades but have become more acute since the end of the civil war.

Sinhala Buddhist mobs rampaged through southern coastal towns including Aluthgama in 2014 after reports a Muslim man attacked a Buddhist monk in the area.

Alan Keenan, a Sri Lanka specialist with the International Crisis Group, said radical Buddhist groups had been staging attacks against Muslims with “a significant degree of regularity” since 2012 and especially since last April.

Keenan said the previous president, the staunch Sinhala nationalist Mahinda Rajapaksa, had condoned instances of anti-Muslim violence and hate speech. The renewed violence in past months could be related to the growing strength of Rajapaksa’s opposition movement, he added.

Last month, Rajapaksa’s party swept to victory in municipal elections in the country in his strongest electoral performance since he was defeated in the 2015 presidential elections.

“Many have argued that it [the inter-communal violence] is a product of the search for a new enemy to replace the Tamils, unite the Sinhala, and win votes by cultivating a sense of Sinhala Buddhists under siege,” Keenan said.

“This is a small number of Sinhala Buddhists playing on more widely fears and myths and concerns.”