“You talk about Eelam but Port city is a “Cheelam” where you don’t have jurisdictions over that territory” – M.A. Sumanthiran (MP) 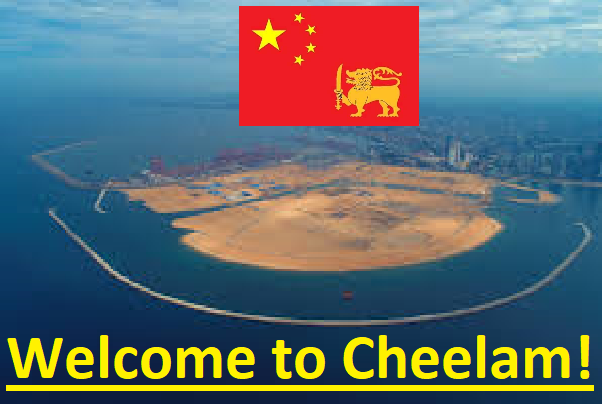 Before I commence my comments on the [Port City] Bill  I must place on record our protest at having this debate at a time like this, when there is a third wave of Covid – 19; when many experts have publicly declared that the alert level should be level – 4 and not level – 3.

Prof. Malik Peiris and Prof. Kamini Mendis have jointly issued a statement to the public. The Government has failed to adhere to professional advice on this matter, all for the sake of hurriedly having this Bill enacted in Parliament today.

There is a lot of talk about why this still remains a part of the country. Government speakers have repeatedly asked the question as to why focus is being made on China, when anyone can come and invest in this artificially created land mass that is annexed to the city of Colombo.

When I appeared in the determination before the Supreme court, I asked their Lordships the question as to why they were wasting their time trying to determine on a Bill that related to a place which is not part of Sri Lanka. And it is that intrigue with which I speak today as well as to why this house is deliberating on something that doesn’t relate to Sri Lanka. I will tell you the reason why I say that at the end of my speech.

Now with regard to,  with regard to the Chinese issue, just two days ago, Hon. Shanakiyan Rasamanikkam tweeted, about a board that was placed in this place called Central Park, which had a name board in Sinhala in English and in Chinese. Sinhala, English and Chinese. And you dare ask the question why people are saying Chinese, Chinese…. And that is not all; when he raised that question no Sri Lankan authority gave a reply. There is a tweet by the Chinese embassy … there is a tweet in reply by the Chinese embassy saying “We noticed an interim sign in a JV building site, not abiding by tri lingual rules; request raised, we respect all three official languages and urge companies to follow”.

They are saying we will rectify it. Not your Government. What has the Chinese embassy to do, with how name boards are to be put in this place? They have taken responsibility- they have taken over the Land- and you are engaging in an exercise trying to enact law for that area.

Now with regard to the Supreme Court determination: The Supreme Court engages in one exercise, to go clause by clause to see if it is inconsistent with any provision of the Constitution. Now you try to avoid that also happening and timed it in a way that there was only one day available for anyone to invoke the jurisdiction of the Supreme Court. Yet more than 20 petitions were filed. If they had not been able to do that you would have passed the Bill in the form in which it was Gazetted.

For all that you say about the legislature and its power; “Supremacy of Parliament” you had given powers to make rules, even criminal Laws, to punish people to that commission. And the Supreme Court has ruled that out as requiring even a referendum, because it violates the Parliament’s legislative powers.

Because of shortness of time I’ll give you just two examples as to why Supreme Court’s determination is not so relevant to us today. When we make laws we not only look at constitutionality, we also have to look at desirability and what is good for the country. Look at clause 40 (1)- there was lot of discussion here, about 30, 33, and 40. In 30 where you require a license to visit this place, “it is there” , any person wishing to visit this place requires a license. Supreme Court has said you can’t have that word “visit”, take it out. But you tried to have it. Now that is in addition, ‘an additional requirement this has to be read with clause 74 which gives this commission concurrent powers with several regulatory authorities.

And one of those regulatory authorities is the Controller of Immigration and Emigration. What has this commission got to do with the controller of Immigration and Emigration? That is why what you tried to sneak in, was in fact a Visa requirement ‘additional license’ for anybody to visit. Even now, if you are to reside in that place you have to get a separate license.

Now if you look at clause 40 Hon. [Vasudewa] Nanayakkara, you will see boarder control. So much you say about federal structure. Where in the world in a federal arrangement do you have boarder control between federal states? You don’t have that.

That is why we say this is not even federal, this goes far beyond that. Its boarder control.

Clause 40 says, any person, any Sri Lankan who enters that place. You can use Sri Lankan rupees ‘all that is said’, but when he’s leaving the place, clause 40 sub (2)’ when he’s leaving that place’ he has to pay a levy. Supreme Court has said No! change that! change those wordings: don’t say “leaving the place”, “taking the goods out”. That’s customs control! As if it makes any difference at all, leaving the place and taking the goods out. If you purchase any goods, the original draft said leaving the place you must pay a levy. Now the Supreme Court wants you to change it to “taking goods out”. It meant the same thing, no difference at all. Cosmetic changes. That is what the Supreme court has prescribed. But what is more important?

It is a private company; this is not a Government corporation.

The Supreme Court has thought it not fit to deal with that, because that has been our position right along ‘that there’s nothing unconstitutional about appointing any foreigner to even be a judge’. So that position has been retained in the determination of the Supreme Court. But nevertheless you are now bringing, – even though it is not prescribed by the Supreme court, you are bringing an amendment to say majority of them will be Sri Lankans. There is an argument that Hon. Keheliya Rambukwella just referred to, that Mr. Kanag – Isvaran advanced before the Supreme Court. It’s at page 14, that this does not form part of Sri Lanka’s territory in terms of International Law, or even Domestic Law.

Supreme Court has dealt with that in page 19. It doesn’t merely dismiss it as you said. This is what it says: it says, that so far no court has ruled it to be so. So far no court has ruled it to be that it is outside Sri Lanka. And this is what they say; presumption of validity, referring to annexation of this as part of the district of Colombo, they say presumption of validity exists pending a final decision by a court and they say the Supreme Court exercising special jurisdiction for determination is not that court. So it still is open for anybody, particularly the Chinese authorities, to claim this to be not part of Sri Lanka. And this determination will assist them in that. And finally Hon. Presiding member, I said, you wouldn’t even consider a federal arrangement, ‘something that exist in almost 100 countries in the world’.

But here you have given away part of Sri Lanka to be given to another Country. You say so much about Eelam; but this is “Cheelam”.

This is Cheena, this is “Cheelam”, that you are enacting in your own laws, when you even don’t have jurisdictions over that territory, but declaring it and gifting it in your territorial waters, a land mass to China. And you will reap, the consequences of this. Hon. Ponnambalam was to refer to various factors about this region. I don’t want to repeat that. You will reap the consequences of this injudicious act of yours very soon.

Excerps from the speech made by Hon. M.A. Sumanthiran in Parliament today (20-05-2021) on the 2nd reading of Colombo Port City Economic Commission draft Bill.