What’s new in the Tamil diaspora?: The Global Tamil Forum comes out of the shadows 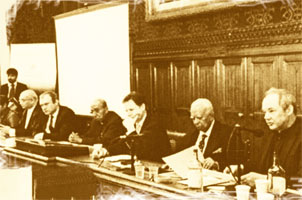 Kumar David
It is to be expected that the obliteration of the LTTE would transform all Tamil polity. Armed militancy has ceased in Lanka (except the hallucinatory hypocrisy of the Defence Ministry when cracking down on rights and freedoms), and the TNA has surfaced as the main political representative of the Ceylon Tamils. (Ceylon is used here to exclude Muslims and Upcountry Tamils and the generic Tamil hereafter refers to Ceylon Tamils).
The status quo was slower to change in the diaspora and remained murky, but a recent visit to London permitted me a closer view. What I had hoped would be nostalgic nightly pub crawls with old buddies, turned into seminars at the School of Oriental & African Studies and King’s College (not university events but venues reserved by student societies), on Modalities of Emergent Dictatorship in Lanka & the National Question, and Great Power Balances in the Indian Ocean, respectively. I was also an observer at the GTF Convention in the House of Commons, and moreover had the opportunity to interact with diaspora youth – mainly Tamils, but a few Sinhalese as well. It was good experience; but no more of my doings; this essay is on political trends in the Tamil diaspora, principally in London, but extrapolation to the rest of the UK and Europe would be reasonable.

There is uncertainty, flux, and thirdly a distinct emergent trend which I will discuss anon. Uncertainty is lodged in the mind of the relatively small part of the diaspora which remains loyal to the LTTE agenda – that is, to the concept of Thamil Eelam as a separate state of the Tamils in the island of Lanka. I would not venture a guess how large or small this sector is, but at my meetings only three or four people intervened such that it signalled them out as carriers of this ideology. The mood of pro-Eelam folk (LTTE loyalists and non-LTTE) was that Tamils would never get a fair deal from the Sinhalese majority; hence they would be better off in a state of their own. However, I did not meet a single person who argued that the Tamils should start again from where the LTTE left off. That is, a return to the armed struggle was deemed futile by implication; but when asked by what other realistic means Eelam could be reached, the replies were prevarications and irrelevancies.

In the past rich diaspora Tamils would pontificate for a separate state and contribute to LTTE funds, but carefully educated their sons and daughters as doctors, accountants and engineers. In LTTE times there was cannon fodder, children of the poor, of farmers and fishermen, mobilised on the ground, through whom this class could ejaculate its pent-up nationalist frustrations while remaining ensconced in material comforts of Western prosperity. Sans the LTTE, sans the “boys”, sans children of the Tamil poor to feed to the guns of the Sinhala state, this option has dried up.

The flux in the middle

It is my reading that the majority of Tamils in the diaspora are no longer bearers of LTTE ideology hence it is false to use the term LTTE-rump as though it reflected the general mood of adults or youth. There is indeed intense, even passionate commitment to what can be called “the Tamil cause”; but equally, there is realisation that armed struggle and civil-war have failed and acceptance that Thamil Eelam is now a daydream unless delivered by Washington-cum-Delhi; or issues from a great movement of global Dravidians. But diaspora Tamils are not raving lunatics like Weerawansa; they know that Washington and Delhi may be usable for enforcing human rights or political solutions, but are not standard-bearers of Thamil Eelam. Or imagine Tamil Nadu and Malaysian Tamils exchanging their present positions for an irredentist Eldorado of global Dravidianism. Heck, they must sniff crack-cocaine before it comes to that! 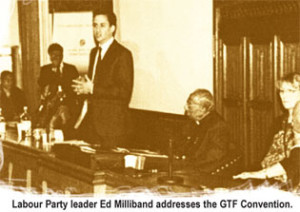 To put it simply, the large mass of diaspora Tamils have bitter personal experiences, are angry about the carnage in the Vanni, and determined to oppose oppression of the minority, and hence will help defeat Rajapaksa siblings and state. However, apart from negative sentiments of rage, alienation and injustice, they don’t quite know what positive strategy to pursue. If Eelam is a bit of a stretch and if the Sinhala racist state is the enemy, but if wary of democratic (and hopefully socialist) alliances with Sinhalese, Muslim and Christian progressives, where does that leave them? Much confused you might think – well not quite. The diaspora is not in stasis but in reflexive movement out of miasma and into some light; the mist is clearing and I prefer to look at the positive side.

The Tamil diaspora is in flux. It is letting go of the past but has not yet found a future. The agency which should have been a point of resonance, the left, is dead; the dead-left in Rajapaksa’s pocket is despised. Smaller left parties are noticed, but at the bottom of the radar screen; none are significant. Unfortunately, more in the diaspora than in the Tamil community at home, the JVP is perceived as alien, not overtly racist but with nothing to offer; a predicament for which the JVP is itself 101% to blame! There is grudging acceptance that with the Tigers buried, the TNA is the only game in town for the Tamils. All this may be platitudinous for some readers, but this shift of allegiance is gelling only slowly in diaspora minds.

A matter of some disappointment to me is that while there is, obviously, interest in a national democratic programme, it is difficult to engage diaspora youth in socio-economics. Try and you run into a stone wall or blank heads. Am I asking for too much? Give it time, they’ve hardly got over the LTTE delusion, maybe that’s enough for a decade. Only young people who return to Lanka and soil their hands in real issues can appreciate that ivory tower exclusively-nationalist thought is sterile. Even contributions from afar to a national democratic programme will be off the mark; I refer to the writing of a new constitution, economic strategy and the IMF, and social issues (health, education and women). Since the majority of youth will not return, acclimatised as they are to a new ethos, their main contribution will be engendering international pressure for democracy in general and minority rights in particular; still valuable.

The Global Tamil Forum’s convention at the House of Commons at the end of February was more a grand event than a conference where perspectives are debated and future programmes thrashed out. In what it set out to do, it was a great success and established two gains. Firstly it displayed that the British political establishment (Tories, Labour and the Lib-Dems) were willing to throw their weight behind a political solution and that they unanimously backed a call for reconciliation as per LLRC recommendations, accountability and independent investigation. The ANC added its voice as did Erik Solheim, Yasmin Sooka and Gordon Weiss. The second achievement is that it added to the pressure building on GoSL at the UNHRC sessions in Geneva. GoSL is boxed in and under intense international pressure complicating its domestic putrefaction – impeachment travesty, Divineguma charade, senior ministers abusing the law with impunity on behalf of their progeny; a rotten catamaran long overdue to sink. These are two signal achievements of the GTF convention.

An initiative that did not work out well was the intention of inviting about two dozen progressive Sinhalese activists, leftists and journalists as a first step in building multi-ethnic mobilisation. In the end there were no more than four or five Sinhalese and no one high profile made a presentation. Never mind, these are early days and a start has to be made. People intending to return to the Island are concerned about bullying by state and chauvinists, and rightly so given the Rajapaksa government’s rampant abuse of power against opponents. Second, and perhaps more important, the GTF had done little preparatory spade work. The organisation and its programme are unknown in Lanka; how can a Sinhalese participate in a convention on a very tricky issue without transparency on the nature of the host. If a large Sinhalese contingent was to participate, the programme agenda should also have been circulated and discussed in advance. One criticism that does not trouble me at all is the charge that the GTF includes people who were once sympathisers or supporters of the LTTE. Any Tamil political organisation today will include plenty of ex-LTTE people. How can it be otherwise given the LTTE’s pervasive influence and energy for thirty years in both the diaspora and at home? Even the Rajapaksa regime includes a strong contingent of ex-LTTE cadres; vide Karuna, Pillayan, KP and paramilitaries who remain armed to this day. Douglas, though not ex-LTTE, also belongs to the tradition of armed Tamils. Every organisation, in which Tamils are present, now and well into the future, will contain former LTTErs. It is time to be plain about this and lay to rest this bogey which state, military and chauvinists use to marginalise Tamil political activity. I believe that the GTF, like the TNA and all Tamil political and non-political organisations, surely contains previous LTTE sympathisers and supporters. That’s fine by me; what’s important is the organisation’s current and future programme.

My assessment is that the GTF leadership has an understanding of the political dynamics outlined in this essay, is receptive to a genuine political solution and accepts the TNA as the on-the-ground leader, is thinking along programmatic lines including alliances in the South, and is desirous of progressive alliances with radical, democratic and leftist Sinhalese and Muslim movements. In respect of the last matter its practices are still in embryo, but will develop. The leadership often looks over its shoulder at the support base which spreads over a spectrum of maturity. Practice more than preaching will help the base to mature. I am of the view that the GTF is a forward-thinking diaspora Tamil political entity and it would be productive for activists of all communities in Lanka to relate to it, ignoring the shrieks that this suggestion will evoke from racist and chauvinist quarters and unavoidable intimidation by the Rajapaksa state.