What happened in Geneva and why? – Madushanka Tennakon 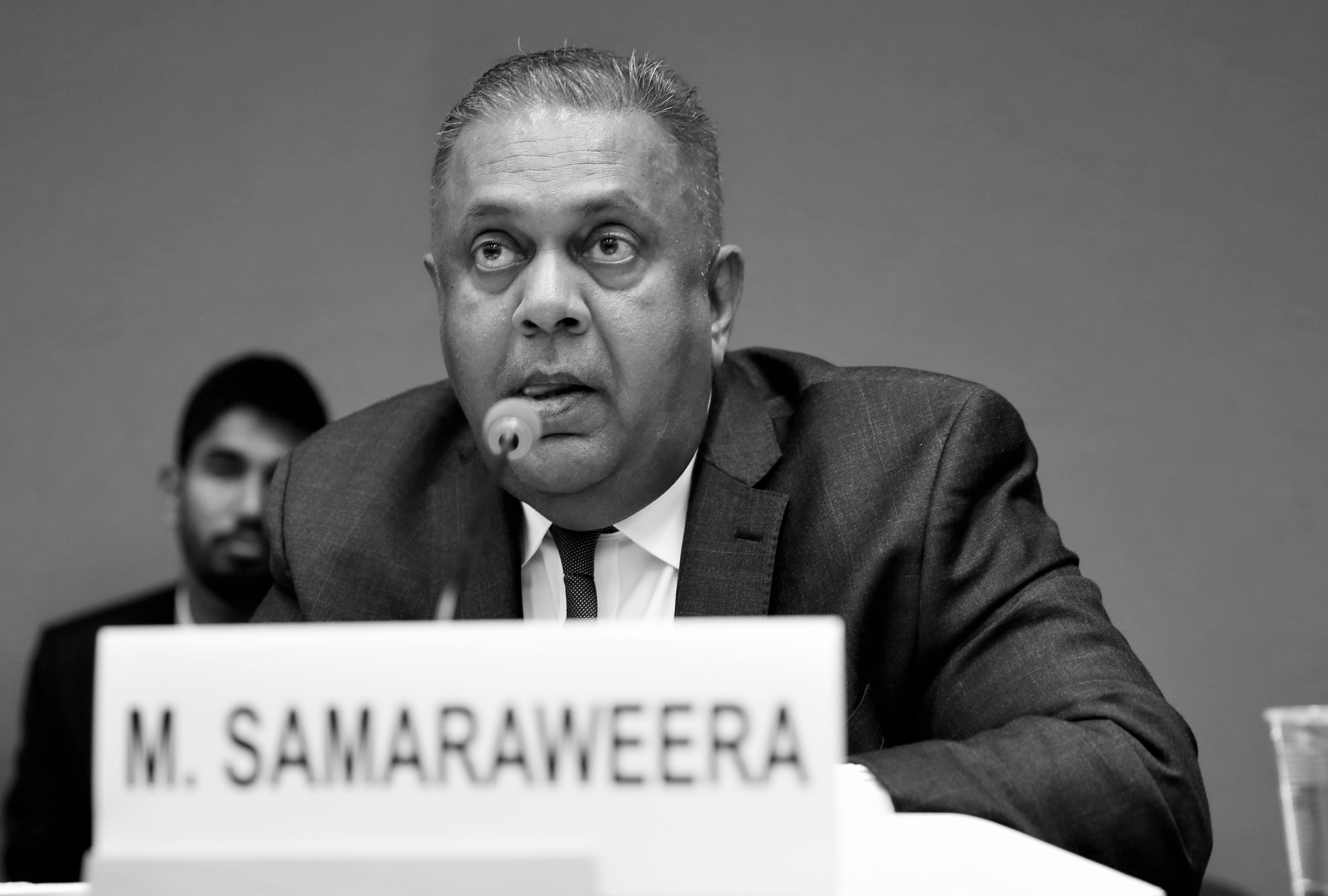 Image: Minister Samaraweera at a side event during  HRC 34, reaffirmed Sri Lanka’s commitment to Transitional Justice, including a Justice mechanism. (c)s.deshapriya.

On 1st October 2015, Sri Lanka committed to fulfilling a transformative agenda for reconciliation and transitional justice at the UNHRC in Geneva. Resolution 30/1 is a result of the recognition of the nation’s duty to move beyond a legacy burdened with conflicts towards the rule of law, good governance, equality, justice, and dignity for all. With the aim of promoting reconciliation, accountability and human rights in Sri Lanka, the Government of Sri Lanka has committed to establishing

But why were these promises made and what progress has been made on this front?

An Office on Missing Persons

For many families, the meaning behind a missing person is an experience that is very personal and painful. For some mothers, a missing person is a child they never saw growing up, for some children it is a father who never came back home from work or a brother who didn’t get the chance to say goodbye. These families have questions, and they deserve the comfort of knowing what really happened to their loved ones. While the search for the missing began nearly 30 years ago, questions have still been left unanswered. Consultations conducted by the CTF ( Consultation Task Force on Reconciliation Mechanisms) reported that this was a primary demand made by victims.

To meet these demands the OMP was formally established in 2017 to:

The OMP will investigate the fate of individuals reported missing or disappeared in relation to:

Thus far in its operationalization, the OMP has appointed 7 commissioners to oversee and carry out its functions, recruited staff members, conducted regional meetings to build awareness/ resolve victims issues, and initiated a process of appointing regional offices.

In addition, the OMP also provided financial assistance to the excavations conducted at the recently discovered mass grave in Mannar.

An Office for Reparations

Many families suffer the plight of physical disability, psychological trauma, loss of property, poverty, marginalization etc. Nearly a decade after the end of the war these victims still cannot meet their most basic needs (such as access to health and education, land and property, or to maintain a sustained livelihood). The need for reparations and the victims’ plea for help were evident in all written and oral submissions received by the Consultation Task Force (CTF). Most often, it was found that the most poorest and most vulnerable groups of society didn’t always demand reparations for specific losses but as a plea for urgent support in order to simply survive.

The Office for Reparations Bill was passed in Parliament on the 11th of October 2018. The Office of Reparations will be responsible for recognizing the harms suffered by victims, as well as designing and implementing reparations policies to help victims rebuild and restore their lives.

The appointment of Commissioners for the Office of Reparations is currently way. The Constitutional Council called for applications to select the officials for the Office of Reparations. Advertisements were made for 05 commissioners including the Chairperson and four members. Applications were open until the 17th of January 2019. The five commissioners including the chairman will be appointed by the President based on the recommendations of the Constitutional Council.

A commission for truth, justice, reconciliation and non-recurrence

In times of war, information is not easily accessible. The TRC is based on the rationale that having access to truth and knowledge will help our society to move forward. The truth will clear any suspicions or doubts in the minds of people who have faced violations and can build an environment of honesty and trust. Rather than using traditional legal/ judicial means of extracting information, the TRC is built on a culture of revealing information through confessions and open discussions.

In establishing such a commission, national ownership is vital. In 2016, a technical team was sent from Sri Lanka to South Africa to study the TRC established after the abolition of apartheid. Lessons learned there will help to build a home-grown model dealing with the needs of Sri Lanka, giving the process national credibility.

These requirements of resolution 30/1 are not forced on Sri Lanka by the international community. Providing reparations, establishing a TRC, investigating war crimes/ crimes against humanity were all recommendations made by the Paranagama Commission appointed by former President Mahinda Rajapaksa in 2013. We cannot turn a blind eye to victims who faced violations decades ago and who have still not found remedies to their suffering. Long periods of waiting with no solutions have not only deepened their pain but also intensified their plight. It is to address the trauma and suffering of these victims, to build a resilient community and an environment of sustainable peace that this resolution matters. Geneva should not be our concern. Our concern should be towards our fellow citizens who cannot enjoy their basic rights.