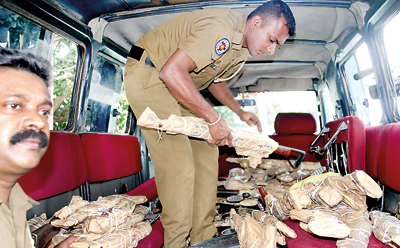 Victims of last month’s Army shooting and assault in Weliweriya, this week relived their nightlong horror at a Magisterial inquiry.
They recounted their nightmare caught up in the crossfire and also the assaults they were subject to when they took refuge inside the Catholic church.

The Magisterial inquiry was held by Gampaha Magistrate Tikiri K. Jayatillake in connection with the deaths of Akila Dinesh, Ravishan Perera and Nilantha Pushpakumara who were killed as a result of the protest at Rathupaswala, Weliweriya.  At the onset, Chief Inspector Neville Silva of the Colombo Crime Division submitted a progress report of the investigations. He said statements of 16 persons had been recorded.
The evidence commenced thereafter.  Premalal Perera, 45, a construction worker told the inquiry that he was engaged in paving a sidewalk near St Anthony’s Church, Weliveriya, when he saw a large crowd moving towards the town.“I finished my work around 7.30 p.m. and was heading home, when I heard the sound of a demonstration and subsequently, gunfire. The soldiers were standing in front. The soldiers and the people attacked each other with stones,” he said.

“They assaulted me as they took me to the police. I was bleeding from the head, face, and legs. The soldiers stripped me to my underwear and pushed me into the police cell. There were six others in the cell. I was not a party to the demonstration,” Perera said.

‘Later after the parish priest of the church visited the police we were released and I was hospitalised. I remained in hospital for four days,” he added.

The Magistrate inquired whether he could identify those who assaulted him. He said he could not do that as he had been assaulted badly. “I lost my livelihood for several days and could not feed my wife and children. I expect that some justice is done,” he said.

Jude Nishantha Perera, 45 of Uruwala, Nedungamuwa told the inquiry that he took part in the protest staged by the villagers from morning until evening on August 1 demanding safe drinking water.

“We allowed ambulances and school vehicles to pass through. The police too had closed the roads. Around 5 p.m. we heard that the Army had assaulted people and dispersed them in Belummahara,” he said.
“Around 5 p.m. about 1,000 soldiers and a Brigadier whose name I later came to know was Deshapriya Gunawardena arrived. The Brigadier addressed the gathering. We saw media personnel being taken away by the soldiers. I heard the Brigadier say that the water problem will be resolved and asked the protestors to move away,” he said.

“One of the men said to give the people 10 minutes to move away. The officer said no time will be given and shouted ‘gahapiyaw’ (assault). With this the soldiers started attacking with clubs. The soldiers also shot at the lights, plunging the place into darkness. I climbed onto a building, but when I got off it I was hit by a bullet,” he said.

He said he managed to get home by running through gardens of houses in the area.‘I wanted to go to hospital that night, but my neighbours said the Army was shooting and not to get out. Though I was bleeding profusely I had to wait till next morning when I managed to get to the Gampaha hospital,” he said.
Chinthaka Perera, 21, of Nedungamuwa, told the inquiry that he was injured while trying to get back home during the demonstration.

He said he saw soldiers assaulting the people and also shooting, while the people threw stones at the soldiers. Sunil Joseph, a construction worker from Weliweriya, told the inquiry that he could not proceed home due to the shooting, and decided to take refuge in the church with his wife.

“I heard gunshots. We were seated in the front of the church. Army persons dressed in black stormed the place. One of them hit me with the butt of the firearm in his hand. I cannot remember what happened thereafter. I am supposed to have run into a nearby house and fainted. I was admitted to hospital where I spent several days. I cannot hear properly and feel faint regularly,” he said. Nissansala Prasadini, 29 from Weligalla, Gampola, said that her husband Nilantha Pushpakumara was employed in Biyagama, and on the day of the incident, her husband called her and said there was a protest in the area and there was also some shooting.

She said she tried to contact him later, but was not successful. On the following day when she called his boarding, she was told that he had not returned home.  “I left home with his parents and reached Weliweriya that night. We were told that he was in hospital. It was only the next day that we saw him. He was in a critical state. He passed away on August 4,” she said.

“I am now left with my child and have lost my husband,” she said. Attorney-at-Law Upul Deshapriya noted that the Army’s attempt to collect evidence from civilians by issuing summons on them was an indirect threat to the people. He said that an injunction order should be issued by court to prevent the Army moving into the Weliweriya area.

The Magistrate ordered that if any persons had been threatened such persons could submit an affidavit to that effect on the next date of hearing which is next Thursday.

Soldiers threatened me at gunpoint and asked me to evict ‘refugees’: Rev Sister

Gampaha Magistrate Tikiri K. Jayatillake on Thursday ordered the Colombo Crime Division (CCD) to submit a report on a complaint lodged by a Reverend Sister stating that persons dressed in Army uniform held a gun at her and threatened her. The Magistrate ordered the report to be submitted on the next date of hearing on September 29.

The Rev. Sister, in her statement to the Weliweriya police, said a person dressed in Army uniform pointed a weapon at her and threatened her to put all the persons who had taken refuge in the convent, onto the road. Attorney-at-Law Upul Deshapriya said that the Rev. Sisters and the priest are scared due to direct and indirect threats by the Army.
By Manopriya Gunasekara
ST