Married Sri Lankan Minister says he is ready to marry HR High Commissioner Navi Pillay and take her around! 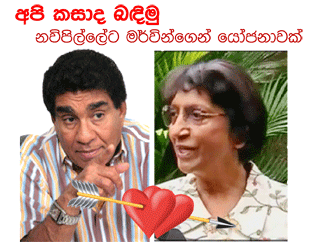 “I urge her to join me to go on a trip around the country. I would teach her the history of Sri Lanka, I would tell her about Maha Ravana. It was we who gave Kuweni in marriage to Prince Wijaya and if Madam Pillay is agreeable I am ready to marry her even tomorrow,” he said.

He made these remarks addressing a public meeting in Maradana, Colombo today.

“We are a nation that wore garments prior to the white man, and I will teach Madam Pillay a bit of our history. We were a nation which conducted trade with the world during the era before Christ.  In order to do a study on our nation she has to visit Anuradhapura, Polonnaruwa and Ruhuna. We are a nation that built a flying machine (Dandu monara- a mythological flying machine) before Wilber t and Orville Wright,” he said.

He further said the country today was free of the clutches of terrorism due to the steadfastness of the Rajapaksas and it was the President who led the country to both the defeat of terrorism and peaceful co- existence among communities.
Listen to audio here
DM