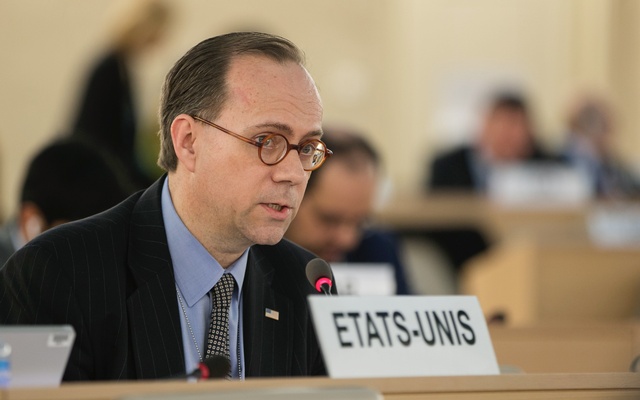 Statement of the United States of America as delivered by William J. Mozdzierz at the in  interactive Dialogue on the High Commissioner’s Presentation of Sri Lanka Report.

Thank you, Mr. High Commissioner, for your comprehensive report. The United States also appreciates the Government of Sri Lanka’s cooperation with your Office and relevant special procedure mandate holders.

Since September 2015, Sri Lanka has taken important steps toward implementing its key human rights, justice, and reconciliation commitments. In particular, we commend the government’s public consultations with civil society and victims across Sri Lanka. We also recognize the joint efforts of President Sirisena, Prime Minister Wickremesinghe, and Opposition Leader Sampanthan in drafting a new, more inclusive and democratic constitution, passing legislation to establish an Office of Missing Persons, and ratifying the Convention on Enforced Disappearances.

These reconciliation processes are complex, but we had hoped to see greater and more sustained progress over the past 18 months. While over 4,500 acres of land have been returned to private owners, many thousands of acres seized during the conflict period remain under military control. While arbitrary and illegal actions by security officials appear vastly reduced from the number reported during the previous government, we are concerned by reports of continued arbitrary arrests and detention, torture, sexual violence, and harassment by security officials. Government statements against international participation in any future Sri Lankan judicial mechanism raise understandable concerns among victims and families about the integrity of any judicial process. Yet lasting peace requires that the government remain committed in word and deed to implementing its international commitments fully.

Therefore, we encourage the Government of Sri Lanka to make public a strategy and timetable for implementation of the reforms and commitments outlined in this Council’s Resolution 30/1. Priorities should be reforming the constitution, operationalizing the Office of Missing Persons, passing new counterterrorism legislation, establishing a truth commission, continuing releases of military-occupied land, and implementing fully all outstanding international commitments. The United States looks forward to continued close engagement with the Government of Sri Lanka on these processes to achieve lasting peace.