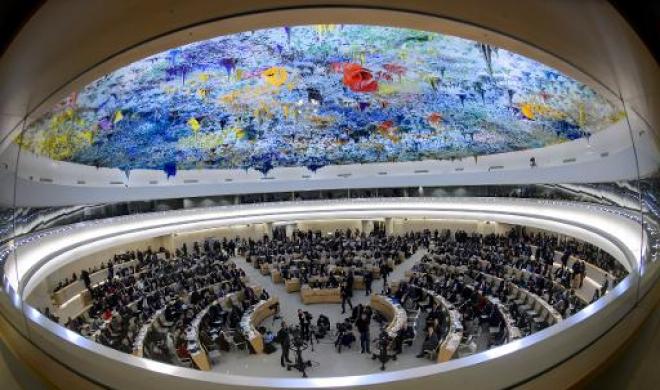 GENEVA (18 May 2018) – The Human Rights Council this afternoon concluded its special session on the deteriorating human rights situation in the occupied Palestinian territory, including East Jerusalem, by adopting a resolution in which it decided to dispatch an independent, international commission of inquiry to investigate all violations of international humanitarian law and international human rights law in the context of large-scale civilian protests in the occupied Palestinian territory.

In the resolution, adopted by a vote of 29 in favour, two against, and 14 abstentions, the Council decided to urgently dispatch an independent, international commission of inquiry, to be appointed by the President of the Human Rights Council, to investigate all alleged violations and abuses of international humanitarian law and international human rights law in the occupied Palestinian territory, including East Jerusalem, particularly in the occupied Gaza Strip, in the context of the military assaults on the large-scale civilian protests that began on 30 March 2018.  The Commission of Inquiry was to present an oral update to the Council at its thirty-ninth session and a final, written report at its fortieth session.

The Council condemned the disproportionate and indiscriminate use of force by the Israeli occupying forces against Palestinian civilians, including in the context of peaceful protests, particularly in the Gaza Strip, and called for an immediate cessation of all attacks, incitement and violence against civilians throughout the occupied Palestinian territory, including East Jerusalem, and it called on all parties to ensure that future demonstrations remain peaceful and to abstain from actions that could endanger the lives of civilians.  Finally, the Council called upon Israel, the occupying power, and all relevant parties to cooperate fully with the commission of inquiry and facilitate its access.

The opening meeting of the special session heard keynote statements by Zeid Ra’ad Al Hussein, United Nations High Commissioner for Human Rights, and by Michael Lynk, Special Rapporteur on the situation of human rights in the Palestinian territory occupied since 1967, by video link, as well as statements by Israel and the State of Palestine as the concerned countries.

A summary of their statements and the debate can be found here and here.

The thirty-eighth regular session of the Human Rights Council will take place from 18 June to 6 July 2018.