UNHRC 25: India takes the wind out of US sails but leaves Lanka puffed 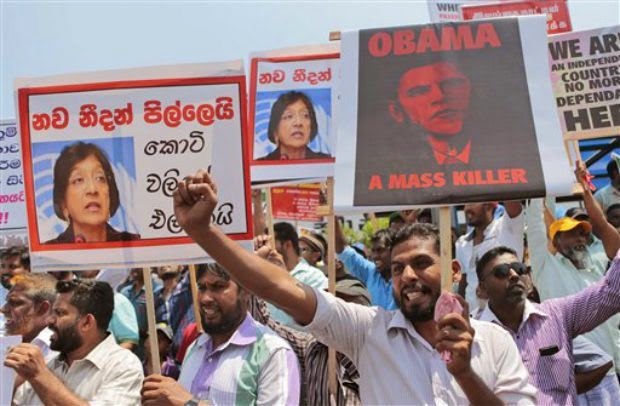 Though India took the wind out of puffed US sails set to charter a new turbulent course for Lanka by abstaining from voting in the US-sponsored resolution on Thursday, her non committal stance did nothing, however, to rock the smooth passage of the resolution which was comfortably passed with 23 nations voting for and 12 against, thus conferring the United Nations’ inquisitorial mandate upon Navi Pillay’s office to conduct an international probe into Lanka’s alleged violation of human rights and humanitarian laws.
Whilst India’s reasons for abstaining — that it considered that any international probe with an open ended mandate did not reflect the UN spirit which created the Human Rights Commission in 2006 and that such an intrusive resolution had the potential not to promote but to hinder reconciliation — would have softened the blow for the Lankan Government and enabled it to save some loss of face, it does not call for the opening of the bubbly and the popping of champagne corks in a frenzied indulgence of national euphoria in supposed triumph.
Instead it demands the utmost sobriety of temper when it comes to appraising the state of our own house and considering what reforms need be done to put it in order acceptable by international standards for human habitation. It calls for a cool, clear head instead of a jingoistic tenor, a readiness to dismount from the high horse of chauvinistic bellicose bravado and come down to earth bearing a more temperate countenance; and respond with the required degree of responsibility to the grave challenges hurled with a realistic approach to salvage Lanka’s temporary loss of sovereignty.
Make no mistake, this resolution is a blatant attack on the core concept of sovereignty as conceived and held sacrosanct by all independent and sovereign nations. For the first time since the grant of independence 66 years ago Lanka must feel her loss of virginity, the violation of her soul’s sanctity, the rape of her very being by the world’s sole superpower masquerading as the globe’s good samaritan.

India’s words, though comforting, offer scant solace especially since on the very same day it was uttered on the international stage in Geneva, the Congress Party which represents the Government of India issues its election manifesto in New Delhi and in it calls for a “credible, objective, time-bound probe into allegations of human rights violations and war crimes by Sri Lanka” and states “We will work with other countries, to prevail upon Sri Lanka to ensure a credible, objective, time-bound inquiry into allegations of human rights violations and excesses committed by the Sri Lankan forces during the concluding phases of the operations against the LTTE.”

India’s duplicitous stance is also revealed by another curious ploy she utilized at the UN. If the reasons she gave as to why she could not vote for the resolution were genuinely held why on earth did she not vote against the resolution instead of merely sitting on the fence and cowardly and hypocritically abstaining?
With the Indian general election next month and the now ruling Congress Party’s defeat on the cards, the Congress party’s manifesto may not be worth a second glance. But it does reveal that whatever India may proclaim to the international audience, the power, and influence wielded by Tamil Nadu still hold sway and that the central Government of India must, even reluctantly, pay deference to the dictates of political bosses Jayalalithaa and Karunanandhi, the self appointed God Mother and God Father of Tamil Tigers.
Perhaps the expected landslide victory of Modi, which will free him of the need to form a coalition with smaller parties to assume prime ministerial office, will reduce the power of the regional states and may, perhaps, be of benefit to Lanka. Perhaps with his hands thus strengthened and the need to play to the Tamil Nad galley lessened, it may permit him to abandon some of the pre-election pro-LTTE rhetoric he had hitherto expounded. Perhaps India’s touching reference, in her statement on Thursday of her reasons why she was abstaining from the UN vote, to Lanka ‘as the closest neighbour with thousands of years of relations with Sri Lanka,’ is a welcome sign that she is still prepared to play the ‘Big Brother’ role to Lanka despite her Foreign Minister Kurshid’s rude rejection of it last month (See Sunday Punch February 16th), perhaps the Presidential decision on Friday to release all Indian fishermen held for fishing in Lanka’s waters may thaw the settled frost with a possible open season for Indian fishermen urged to fish in the Palk Straits freely.
Or perhaps the guiding reason for India’s abstinence is mainly motivated by her desire to maintain the appearance of her own good health and not subject her Indian Army’s peace keeping actions in the North of Lanka to any form of an international cat scan which might, who knows, reveal some embedded malignancy.
But Lanka’s foreign policy cannot rest on the above premises nor can it be forged on the anvil of any special sentimental relationships but must be based on the tried and tested dictum that ‘no nation has permanent friends, only permanent interests’ the validity of which has been glaringly revealed to us by India herself in recent times.
Now our attention must be focused on what the American resolution adopted by the United Nations bodes for Lanka, what it entails and the consequences that will flow from its implementation by the Human Rights Commissioner.
Firstly, Human Rights Commissioner Navi Pillay is required to monitor the human rights situation in Sri Lanka and to continue to assess progress on relevant national processes;

Secondly, Pillay has been empowered with the right and charged with the duty of conducting a full-scale investigation into alleged violations of human rights committed by the Lankan Government during the period 2002-2009 and ‘to establish the facts and circumstances of such alleged violations and of the crimes perpetrated with a view to avoiding impunity and ensuring accountability.
Thirdly, after conducting such an investigation the Commissioner is required to present an oral briefing at the Council’s 27th Session to be held in March 2015 to be followed six months later by a “comprehensive report followed by a discussion on the implementation of the present resolution at its twenty-eighth session.”

Finally, the resolution “Calls upon the Government of Sri Lanka to cooperate with the Office of the High Commissioner in the implementation of the present resolution.”
To any casual observer it might seem on the surface that the effect of the resolution will not be felt until November 2016 and that Lanka has been granted an 18 month grace period before she is called to answer. But has she?
From the moment of the resolution’s adoption Lanka will figure prominently on Navy Pillay’s agenda and her work load will increase overnight to an almost humanly unbearable extent. Yet, no doubt, given the confetti of distinguishing compliments gratuitously cast upon her by the ever effervescent Lanka’s External Minister Peiris, she will approach her onerous tasks with all the enthusiasm and glee of one who has thoroughly enjoyed to the point of resentment her motives being publicly paraded in the limelight of the international human rights catwalk; not to mention of course her memories of the public offer of marriage made to her by another Minister who is now bent on digging his own grave and brooding over the hereafter.
But will she be afforded the chance for ‘pay back’ time? Or will she find herself denied the once in a life time UN sent opportunity to eat her dish of revenge cold? Will she be able to crack the whip or will the Government preempt her dearest wish?
The Government’s pre-Geneva position has been that in the event of the US-backed resolution being adopted, it would refuse to cooperate with the relevant agency of implementation. Its stance has been that the resolution was ‘fundamentally flawed’ and that the report by the OHRC has been motivated by the ‘prejudices’ possessed by Commissioner Pillay.
Now that it has come to pass that the resolution has acquired international approval the Government must perforce formulate its response. It must decide whether it will remain holding fast to its intransigent stance or whether it will change track and accept ground realities shorn of rhetoric. It becomes imperative to so decide in a clinical clime of a rational realm where pulsate only the nation’s paramount interest of her citizens’ welfare and prosperity. The decision must be made solely on objective considerations based on the consequences that will ensue if cooperation is denied.
Should the Government decide to reject the adopted resolution it may possibly serve to ease Pillay’s work load considerably. All she would have to do then would be to report the Government’s non-compliance to the United Nation’s main body. Automatically, once this has been done, Lanka may be listed with ‘non-compliant’ status. Thus branded with the damning Mark of Cain she would be cast East of Eden and be blacklisted by international lending and rating institutions and be denied access to the usual sources of international finance.
At that point it may be too late to reverse. No amount of regrets over the decision taken to reject the right of Pillay to inquire into allegations, no amount of exuberance displayed to bare all and welcome the Human Rights Commissioner’s probe and to place at her disposal all that is necessary to make her investigation a success maybe be to any avail. No tons of humble pie eaten may turn the tide and bring Lanka back to the bank from where she had arrogantly crossed the Rubicon.
Once placed in the Human Rights CRIB as a ‘compliance’ defaulter, she may, possibly, be entrenched in a protracted wrangle from which extrication may be near impossible and the nation’s twilight would draw nigh. It would take a lot of time, a great deal of effort, and plenty of convincing to do before another resolution can be brought to pardon Lanka’s transgression and until then the blacklisted tag would continue to be displayed on her threadbare lapel.
Without the need for any individual nation to impose any sanction Lanka may face the economic crunch of a credit squeeze sooner than expected; and, whilst the nation groans in anguish and curses the darkness, British Prime Minister David Cameron will be uncorking his prized magnum of champagne reserved for special occasions and romancing happy memories of his Colombo visit for the CHOGM summit.