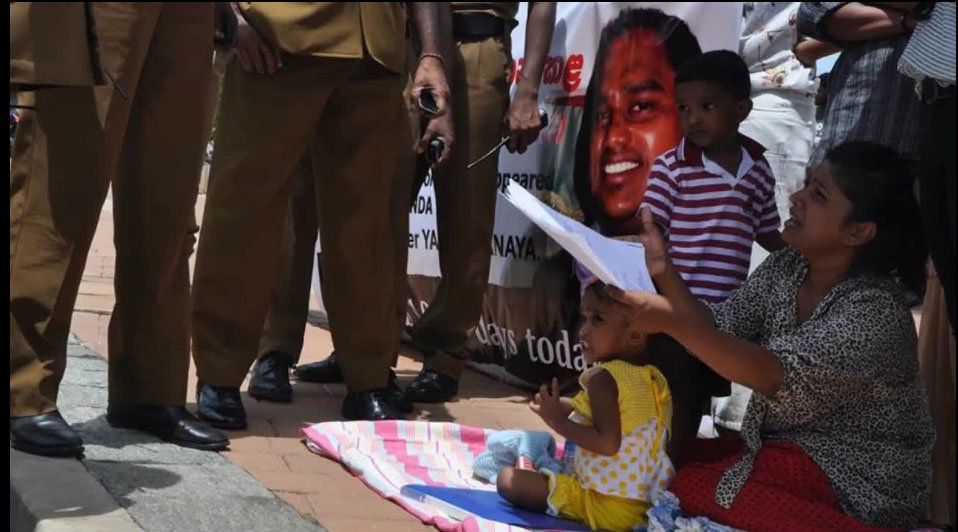 ( Now Police has file a case against Mauri Inoka for sitting in the Galle Face Green; Vikalpa photo of Mauri’s fast being disrupted by the police)
By Ruki Fernando.

Madushka De Silva disappeared on September 2, 2013 in Anuradhapura – Sri Lanka’s Sinhalese-Buddhist heartland in the North Central Province. The third anniversary of his disappearance coincided with Ban Ki-Moon’s visit to the country. On that day, the UN secretary general was so close, and yet so far from De Silva’s wife, Mauri Inoka.

While Inoka, along with about 12 activists, was confronting a hostile police on the streets of Colombo, who claimed to be concerned about the security of the secretary general, Moon was at the nearby Hilton Hotel with his delegation, politicians, government officials and some of Colombo’s diplomats and civil society activists. The secretary general, or even a member of his delegation, had no time to drop by and spend a few minutes with Inoka, who had submitted a formal complaint about the disappearance of her husband to the UN. When she went to the hotel to attend the secretary general’s “public” lecture, she was turned away, as she was not on the list of “public” who were invited to this “public lecture”.

Beyond the physical distance and barriers, Inoka’s frustrations with the new government appeared to be in stark contrast with the secretary general’s optimism and praise for the new government. Or perhaps, it showed the distance between the diplomatic niceties of the UN and the tears of Inoka and her children along with the tens of thousands like her.

Attacks on freedom of expression and assembly

Inoka had spent the previous night and day on Colombo’s popular beachfront, Galle Face Green, observing a 24-hour protest vigil. For three years, she had been calling on authorities to investigate the disappearance of her husband and provide some interim relief to her and her children. However, she hasn’t receives any answers in the past three years and they don’t appear to be forthcoming in the future.

In desperation, Inoka, together with 12 friends and supporters, organised a peaceful and silent march towards the Presidential Secretariat and the Hilton Hotel. “We were armed with only photos of Madushka and banners. Vehicles and pedestrians passed by us freely, with absolutely no disruption. But despite our pleas, we were stopped by the police, violating our rights to freedom of expression and assembly,” she said. “After we were compelled to disperse, a lawyer and an activist at the protest were stopped and subjected to intimidation by the police when they were leaving.”

Instead of expediting the investigation into her husband’s disappearance, the police have started investigating Inoka and some activists who were supporting her. She and at least four activists have been summoned to the Fort Police Station on the morning of September 14. Some of the activists have expressed fears of being arrested.

On August 31, hours before the secretary general arrived in Colombo, several university students were reported to have been hospitalised due to the teargas and water cannons used by the police to disperse them from staging a protest march against a private medical college and demanding an increase in the university intake.

On the day after the secretary general left from Sri Lanka, the police stripped a young man on the road and assaulted him on charges of being a drug user. When a journalist challenged the police conduct, he too was assaulted.

Although the space for freedom of expression and assembly has increased since January 2015, such incidents have happened regularly in the past 20 months, especially in the highly militarised North.

Despite these incidents, the secretary general chose to unreservedly welcome the good governance initiatives of the new government.

More than 100,000 Sri Lankan families, who have reported missing relatives since the 1980s, share the pleas of Inoka.

Like Inoka, nearly all families await truth, justice and reparations. When the secretary general visited the war-torn Jaffna, several Tamil families of the disappeared, from across the North, lined up the streets with photos of their loved ones, placards demanding truth and justice, and with tears in their eyes.

A few days after the secretary general left, a young Sinhalese boy was reported to have disappeared in the Southern city of Hambantota after last being seen in police custody. The day before the arrival of the secretary general, an ex-LTTE cadre – a Tamil – was reportedlyabducted in a white van, in the highly militarised Northern city of Kilinochchi.

Ironically, the abduction of the ex-LTTE cadre was reported to have happened on the International Day for Victims of Enforced Disappearances, in the same month parliament approved the setting up of an Office of Missing Persons (OMP) – the government’s latest initiative to address disappearances – and three months after Sri Lanka ratified the International Convention for the Protection of All Persons from Enforced Disappearances.

Despite serious concerns being expressed about the “consultation” process and the OMP by families of disappeared, by activists and by the government’s own Consultation Task Force, long before and even during his visit, the secretary general chose to welcome both.

Tamils, whose lands are occupied by the military, also took to the streets of Jaffna when the secretary general present. Some of them travelled several hours and over hundred kilometers and were probably consoled by the fact that the secretary general had called for speeding up process of return of land so that they could return home.

Before the secretary general arrived in Colombo, families of the Welikada prison massacre and eyewitnesses who were being threatened and intimidated appealed to him for a meeting. They also pleaded with him to highlight the lack of progress in investigations and prosecutions in his private meetings and his public remarks to the media. While the contents of private discussions are unknown, there was no reference to impunity in relation to this single largest post-war massacre in any of secretary general’s public remarks.

He, however, did emphasise that the victims deserve to have their voices heard, that they deserve credible, transparent and solid transitional justice mechanisms and that they cannot wait forever. He also indicated that he had stressed the importance of these with political and military leadership.

UN’s failure and attempts to move on

The secretary general was forthright about what he called the “big mistakes” that the UN made in relation to Sri Lanka under his leadership, and that if the organisation had been more engaged, they could have saved several more human lives.

Despite this having been acknowledged in 2011 by the secretary general’s panel of experts and subsequently by a UN internal review report, the secretary general personally acknowledging this in Sri Lanka was of significance. He, however, stopped short of apologising for this monumental failure under his leadership and avoided facing those who were abandoned by the UN, despite some of them lining up the streets in Jaffna while he was there.

Instead, the secretary general remarked that the UN had learnt “very hard lessons from Sri Lanka where the fog of war had obscured the centrality of human rights” and that the UN had taken steps to ensure that human rights were at the centre of all its decision-making. He squarely attributed the Human Rights up Front (HRuF) initiative as a response to the mistakes the UN made in Sri Lanka and the lessons they had leant.

If the UN’s HRuF were to become a reality, a good place to start would be Sri Lanka – the tragedy that led to the initiative. The report of the panel appointed by the secretary general helped kick start subsequent actions on Sri Lanka at the UN Human Rights Council and by the Office of the High Commissioner for Human Rights (OHCHR). However, a coherent rights-based strategy from the UN towards Sri Lanka is not yet visible.

The new government has improved relations with the UN and intensified engagement with UN officials. But despite this, the secretary general doesn’t appear to have elicited a major commitment from the Sri Lankan government during the visit, such as ways to engage with the Human Rights Council beyond March of next year, or establishing an OHCHR field office in Sri Lanka.

It is becoming increasingly difficult to engage with UN officials and the member states, especially to get a response for people like Inoka, the families and eyewitnesses of the Welikada prison massacre and the many survivors and families of victims from the North who ask, “will the UN listen to us, what they will do for us?”

Last week I choose to be with Inoka at her vigil and forego the meeting with the secretary general. But, despite survivors, families of victims and some activists trying to communicate reports of continuing violations, and the limited progress in addressing impunity to the UN, rights issues didnot feature prominently in the secretary general’s public remarks.

Neither was there much symbolic action expressing solidarity and support for the struggle for rights by Inoka and others like her.

The UN, especially the incoming secretary general should be careful not to get carried away with the “charm offensive” of the Sri Lankan government and its ambitious promises. Changes for the better, after an end of a three decade brutal war and a decade of authoritarian rule, should not lead to Sri Lanka being prematurely marketed as a “success story,” even before the survivors and the families of victims experience tangible changes in their lives.

While much of the reform must happen within Sri Lanka, the UN officials and member states still have an important role to play beyond praising the positive initiatives and the progress made. The secretary general, the High Commissioner for Human Rights and UN’s various mechanisms and institutions should try to provide an objective picture of the situation in Sri Lanka to the UN member states, find ways of continuing engagement over the next few years and give a central place to the tears, cries, struggles and expectations of Inoka and others like her.