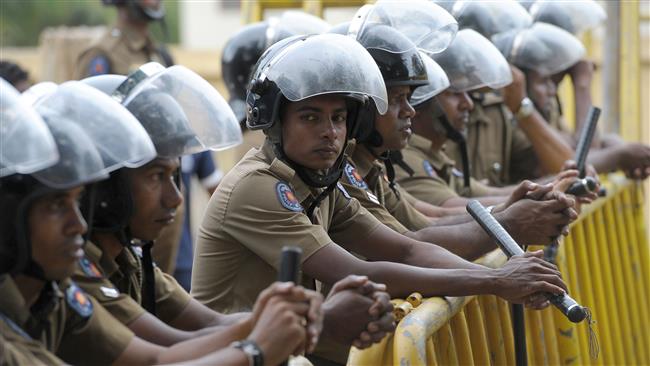 The United Nations Committee against Torture has urged Sri Lanka to investigate documented allegations of rape and torture of detainees by security forces.

The UN committee on Wednesday called on the government in Colombo to rein in “broad police powers.”

The committee’s report also drew attention to reports of poor conditions of detention, deaths in custody and the use of forced confessions in court.

The report includes recommendations by a panel of 10 independent rights experts.

The report has also cited allegations that “police investigators often fail to register detainees during the initial hours of deprivation of liberty or to bring them before a magistrate, within the time-limit prescribed by law, during which time torture is particularly likely to occur.”

“The committee is concerned that the broad police powers to arrest suspects without a court warrant has led to the practice of detaining persons while conducting the investigations as a means to obtain information under duress,” the report says.

It also urged the Sri Lankan government to prosecute the culprits behind the murder of the “Trincomalee Five” students on the beach and 17 aid workers of Action Contre la Faim (Action Against Hunger), both in 2006.

Elsewhere in the report, the panel urged Sri Lanka to identify and prosecute perpetrators of “emblematic cases” from a 26-year civil war that ended with a crushing defeat of the separatist Liberation Tigers of Tamil Eelan in 2009.

The Sri Lankan army has been blamed for killing thousands of civilians, mostly Tamils, during the final weeks of the conflict.

The Tamil Tigers have also been accused of widespread abuses during the war.

There was no immediate response from Sri Lankan authorities to the report. Jayantha Jayasuriya, the island’s attorney general, had earlier said that his government had a zero tolerance policy when it came to torture.