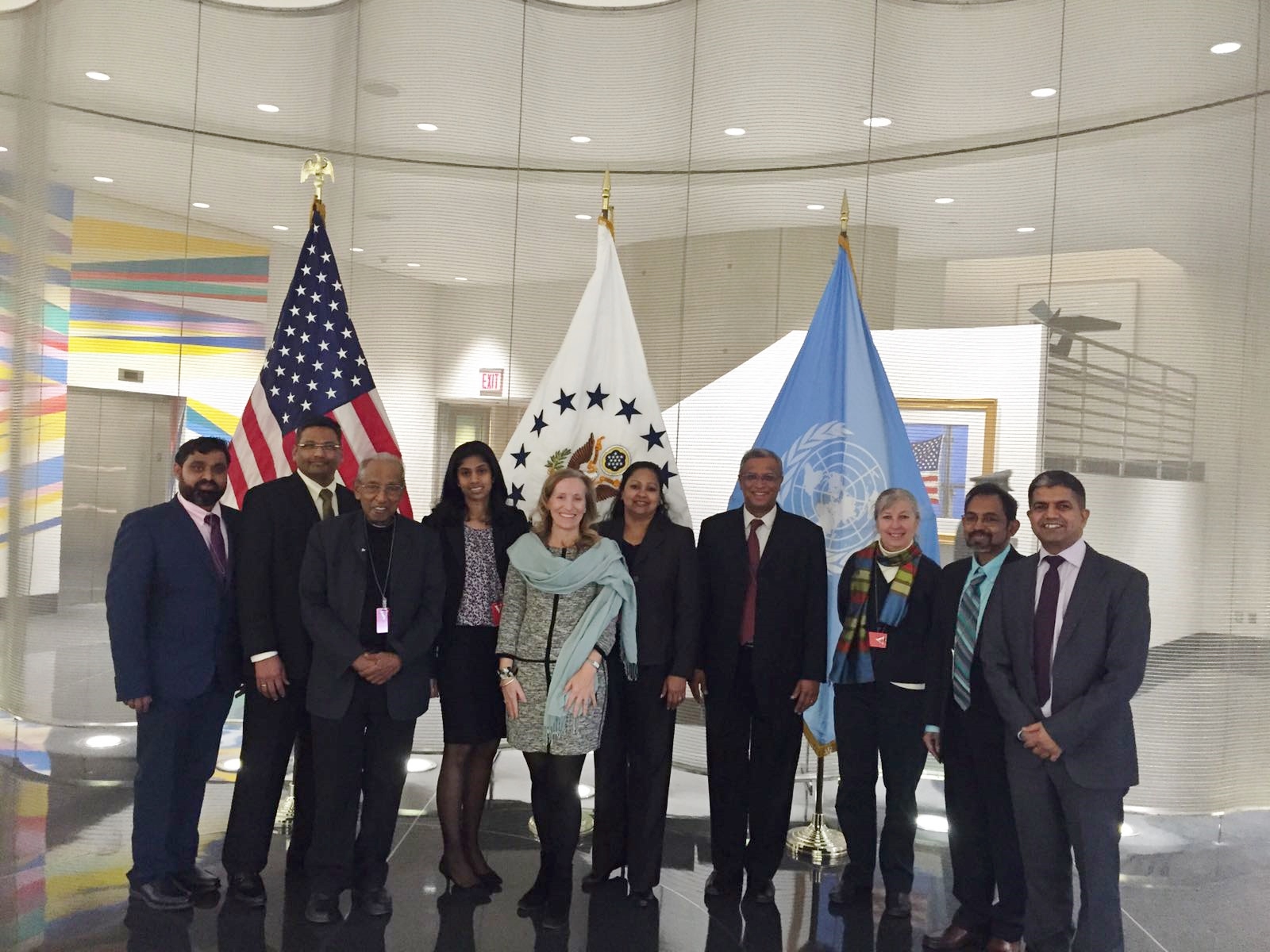 Image: TNA – GTF members with the US Amb Kelley Currie at the US Mission in New York.

A joint delegation of TNA and GTF visited the United States of America at the time when Sri Lanka has been under scrutiny at the UN in Geneva, with appointments secured from the relevant highest levels of authority at the UN, US Administration and Government and the Norwegian Government.

This visit at this critical juncture was based on TNA’s and GTF’s continued engagement with the Government of Sri Lanka to encourage to implement their 2015 manifesto commitments and commitments made to all Sri Lankans and the international community.

This visit was significant especially considering that the US still hasn’t appointed an Ambassador in Geneva.

The primary objective of the visit was to brief the officials and governments of the ground reality considering the deteriorating situation with law and order, appraisal of status on the constitutional reform process and implementation of UNHRC resolutions 30/1 and 34/1.

Among other serious concerns, the delegation discussed the need to demand Government of Sri Lanka to commit to a timebound implementation plan of resolutions 30/1 & 34/1 of the UNHRC and the need for UNHRC monitoring and oversight over Sri Lanka beyond March 2019.

The delegation was delighted that the United Nations Under Secretary General for Political Affairs Mr Jeffrey Feltman and Director for Asia and Pacific Division Ms Mari Yamashita with her team spent substantial amount of time discussing their observations and of hearing out concerns of the delegation at the main UN building in New York. Under Secretary General Feltman’s team has been to Sri Lanka only weeks ago and had a very good understanding of the current political situation.

Deputy US Permanent Representative to the UN, Ambassador Kelley E Currie, who is also the Representative to the United Nations Economic and Social Council, met the delegates at the US Mission at the UN Plaza, 1st Avenue. Ambassador Currie was well informed, reiterated US government commitment for the full implementation of HRC resolution 30/1 and promised to discuss points of concerns with the missions in Geneva and in Colombo.

Similarly, the Norwegian Permanent Representative to the UN Ambassador Tore Hattrem also agreed to share the delegation’s concerns with Oslo and the Norwegian Mission in Geneva recognizing the need for time-bound implementation plan with benchmarks.

Tuesday, 20 March 2018, the delegation met with Ambassador Alice J Wells, Principal Deputy Assistant Secretary for South and Central Asia and her senior staff, at the State Department in Washington DC. Ambassador Wells too was well informed, very engaged and discussed options and alternatives by way of questions and answers. Ambassador Wells also promised to discuss points of concerns with the missions in Geneva and in Colombo.

Delegation also had the privilege to meet with the Senior Republican Congressman Bill Johnson and senior staff of the Foreign Relations Committee at the Hill.