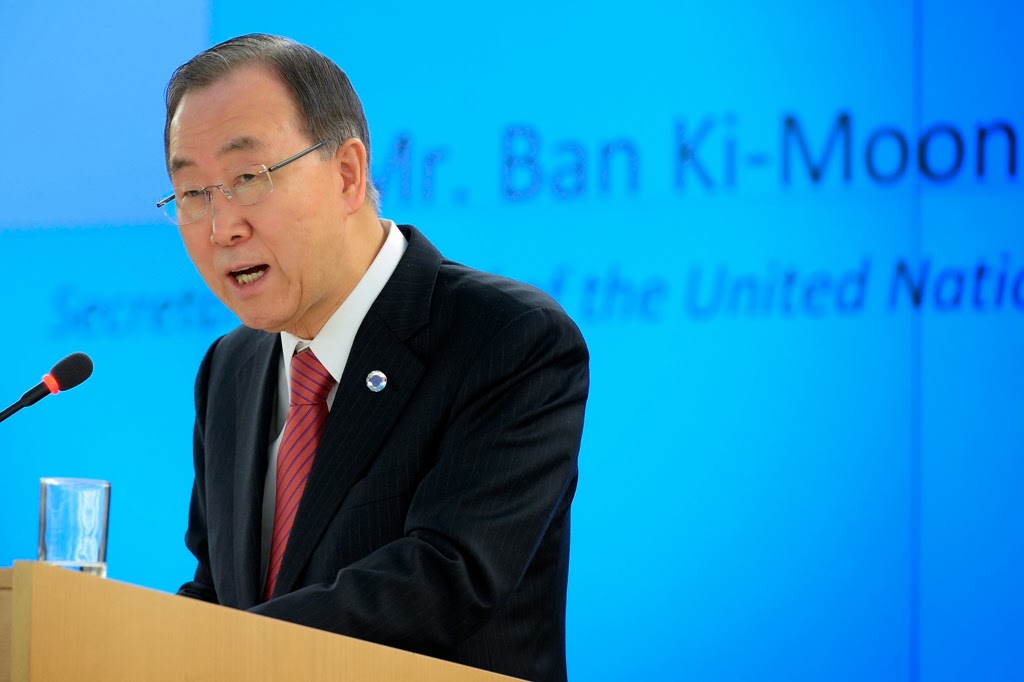 Rights Up Front
“Rights Up Front” Action Plan was launched by the Secretary-General in 2013, and it aims to enhance the United Nations response to situations where people are at risk of, or are subject to, serious violations of human rights, in accordance with the Organisation’s obligations under the Charter.
Promoting and encouraging respect for human rights is a core purpose of the United Nations and defines its identity as an organization for people around the world.

Member States have mandated the Secretary-General and the UN System, through the Charter and successive General Assembly resolutions to help them meet the standards expressed in the Universal Declaration of Human Rights
. In carrying out these responsibilities, the UN System is to use all the resources at its disposal, including its moral authority, diplomatic creativity and operational reach.

Member States have the primary responsibility to protect their populations against massive and widespread violations of human rights. Yet, they have sometimes been unable or unwilling to meet these obligations. At times, the UN System has also failed to meet its responsibilities.

The consequences of failing to prevent serious violations of international human rights and humanitarian law are all too evident, whether for individuals, countries, or regions. In terms of lost lives and people displaced, the price paid due to these failures has been staggering. The legacy may reverberate for generations.

The challenges to ensuring effective protection have existed for many years and in a range of diverse situations. In some cases the Secretariat has failed to effectively communicate evidence of impending crises. The UN’s Secretariat, Agencies, Funds and Programmes have sometimes lacked a sufficiently coherent agreed internal strategy to address serious violations. They have not always deployed and empowered UN staff swiftly to address rapidly changing circumstances, or backed them up when they take risks. And Member States have not always been able to reach agreement on concerted action, thereby weakening the impact of their expressions of concern over ongoing violations.

Many recommendations for improving UN action have been made over the years -most importantly those from the 1999 Independent Inquiry on UN Action in Rwanda and the 1999 review on the fall of Srebrenica. While the UN System has become better at anticipating and responding to crises affecting civilian populations, the lessons have not always been adequately learned and implemented.

In 2012, the Internal Review Panel (IRP) on UN Action in Sri Lanka characterized UN efforts in the last stages of the war as a “systemic failure”. Today the agony of the Syrian people provides a further test – not just of Member States’ political will to fulfill their responsibilities, but of the UN’s ability to use the full breadth of its mandates and activities to protect the people it is meant to serve.

In the follow-up action to the IRP report, the Secretary-General saw an opportunity to ensure that the lessons of the past are fully acted upon. There are limits to what the broader UN System can do if a government is not protecting its population, shuts the UN out, or when disagreements among Member States delay UN action. But the UN System must still do its utmost to meet its responsibilities.

The actions outlined below to implement the IRP’s recommendations place “Rights Up Front.” They are focused primarily on what the UN Secretariat, Agencies, Funds and Programmes can do to improve their response to future crises. Several elements are intended to complement Member States’ action to meet their responsibilities in the General Assembly, the Security Council and the Human Rights Council. These actions endeavor to place people, wherever they may be, at the heart of UN strategies and operational activities.

Six actions, in particular, can make a qualitative difference in the way the UN System meets its responsibilities:

Action 1: Integrating human rights into the lifeblood of staff so that they understand what the UN’s mandates and commitments to human rights mean for their Department, Agency, Fund or Programme and for them personally.

Action 2: Providing Member States with candid information with respect to peoples at risk of, or subject to, serious violations of international human rights or humanitarian law.

Action 3: Ensuring coherent strategies of action on the ground and leveraging the UN System’s capacities in a concerted manner.

Action 6: Supporting all these activities through an improved system of information management on serious violations of human rights and humanitarian law.

The actions proposed form part of the responsibilities of the UN as set out by the Charter and Member States. Implementation will require different ways of doing things, including some re-prioritization of existing resources which will need to be approved by Member States, as appropriate. More important than resources, however, will be the multiplier effect of the change in institutional culture these actions will bring about.

Above all, success requires leadership at every level to encourage teamwork and collaboration and to ensure that the diverse mandates of the UN System are harnessed to the achievement of the UN System’s core purposes. It demands the courage and confidence to speak up and to support staff that live up to the values enshrined in the Charter and the Universal Declaration of Human Rights.

People, who are at risk of suffering massive and widespread violations of their human rights, look to the UN for action to protect their rights. They must know and be assured that the UN System is doing everything in its power to assist them and to mobilize the efforts of those who can protect them