The President in the Pandemic – Thisaranee Gunasekara 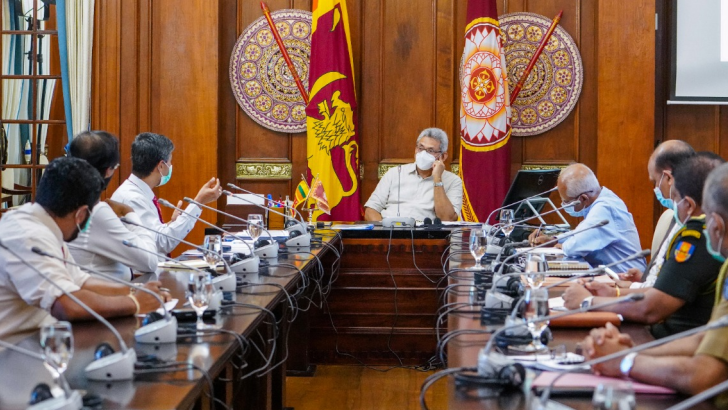 It was October 1348. Bubonic plague, known to posterity as the Black Death, was sweeping across Europe. In Geneva, a man by the name of Agimet was arrested and made to sign a confession (he was twice ‘put to torture a little’, according to official documents). In his torture-propelled confession, Agimet says he poisoned wells to spread plague among gentiles, at the urging of a rabbi. For Agimet was Jewish. And the witch-hunt against him was an early step in the scapegoating of Jews for the emerging pestilence.

The threat of the plague was a common one, then as now. Instead of facing it together, a terrified Christian majority was driven by ignorance and fear to turn on a religious minority. As historian Norman Cantor points out in his In the Wake of the Plague, Jewish communities in Europe were labelled plague carriers and accused of deliberately sowing the seeds of plague among Christians. The fake news and hate-mongering gave rise to a wave of pogroms against Jews. Long after Black Death became a distant memory, anti-Semitism continued to plague Europe.

The reverberations of that history can be felt today as a new pandemic sweeps across the world. In India, “the mainstream media has incorporated the COVID story into its 24/7 toxic anti-Muslim campaign, writes Arundathi Roy in her essay, The Pandemic is a Portal. “The overall tone suggests that Muslim invented the virus and have deliberately spread it as a form of Jihad” (Financial Times – 3.4.2020).

A similar campaign of anti-Muslim hysteria is gathering pace here in Sri Lanka. Online commentators accuse Muslims of birthing the virus and call Muslim patients ‘suicide bombers’, while the government looks the other way.

When several Sri Lankan returnees from Italy tried to escape quarantine, the government and the media very correctly refrained from mentioning either their race or religion. But this correct practice was cast into the four winds last week by the head of the presidential task force against COVID-19, army commander Shavendra Silva. Appearing on Hiru TV in mufti, the general said, “Yesterday a patient was discovered from Akurana… Then we discovered another person from Puttlam. He has also associated with a lot of people. He is a Muslim. In both places they are Muslims”

That gratuitous mention of the religion of two patients signalled a policy of open sesame on racism. In the now-infamous Derana video clip, Minister Mahindananda Aluthgamage follows in the boot-steps of the army commander, saying. “…today 20 patients were identified. Of these, 19 were of Muslim faith. 19!” The two opposition members on the panel, representing the JVP and Sajith Premadasa’s breakaway group, Samagi Jana Balavegaya (SJB) say nothing to counter the minister’s hate speech.

[title]The arrest of a  student and a doctor [/title]

Since then, a few oppositional politicians – notably Mangala Samaraweera and Karu Jayasuriya – have condemned the hate campaign against Muslims. The UNP too has issued a statement against ongoing attempts to instigate racial and religious divisions. But the government remains unapologetic and unrepentant. A student and a doctor have been arrested, according to media reports, for claiming that a special ward has been set aside in a military hospital for VIP patients. But those who try to ignite communal unrest in the midst of a deadly pandemic remain above the law.

The few countries which have managed to contain the virus, notably Taiwan, South Korea, and Iceland, have done so by using aggressive and widespread testing. Test 0 Trace – Test has been their operating principle. According to the GMOA, though Sri Lanka has the capacity to test 750 to 1000 people a day, less than 250 are being tested (Lanka News Web – 5.4.2020). All Ceylon Medical Officials Association (ACOMA) has questioned the quality of the protective clothing provided to those at the frontline of the battle, doctors and other medical workers.

The government is cracking down on critics. It is allowing racism a free rein. But it seems to be failing in the cardinal task of making tests as widespread and as frequent as possible. Connect the dots, and what emerges is a ruling cabal that is prioritising its narrow political agenda even in a time of national and global disaster.

On the sixth day of the curfew, the president set free a convicted killer.

Army sergeant Sunil Rathnayake was found guilty of murdering eight people; that’s three more deaths than the virus has caused so far. “All the eight deceased persons had sustained the identical fatal injury, a cut on the neck inflicted from behind, as disclosed by the medical evidence,” wrote Justice Buvaneka Aluvihare in the Supreme Court judgment that confirmed Sunil Rathnayake’s murder conviction. Amongst those whose throats were slit from behind was a five-year-old child. The toddler had accompanied his father, two brothers (aged 13 and 15) and other adults (all of them war-displaced civilians) in their fatal journey to their original village of Mirusuvil. As they were about to leave, writes Justice Aluvihare, the toddler saw a guava tree full of ripe fruits. He begged for some fruits. The group stopped to pluck the fruits. That was when the killers arrived.

What kind of leader would pardon such a killer? What kind of a future can the country expect from such a leader?

What adds to the shame and exacerbates the shock of this pardon is its timing. The pandemic should have put a stop to politics as usual. Instead, the president is using the pandemic to advance his own political agenda.

When the pardoned killer emerged from the prison, his welcoming party was headed by none other than retired major general and defence secretary Kamal Gunaratne. That presence was as symbolic as the pardon itself because it gave to the pardon the final ideological imprimatur. This was no isolated act, it said, but an integral component of the Gotabaya Rajapaksa political project.

No crime is a crime in my service, the pardon says. Loyalty sanctifies every action, turning even the most heinous murder into an act of heroism.

Impunity is your inalienable right if you are a true believer, the pardon says. If you remain true to me, the pardon says, I will save you from the consequences of your action, be they official or unofficial.

Barbarism is heroism, the pardon says, and blood lust is patriotism.

When the sole survivor of the massacre made his complaint, the military did not try to suppress it. On the contrary, the witness was taken seriously, given protection, and the investigation conducted with no loss of time, initially by the military police under the direction of Major Sydney Soyza. If the crime symbolised the dark side of the military, the effort to uncover it and hold the guilty to account indicated that there was another side too, one of honour and decency, of a basic sense of justice, and of compassion. With this pardon, the president has placed his stamp of approval not on those within the military who saw the cold-blooded murder of eight civilians as a crime but on those who committed, approved or excused that crime. The pardon will rebound even on those Sinhalese who are indifferent to it or are elated by it – because it also paves the way to two, three, many Rathupaswalas.

The Mirusuvil case was prosecuted by the AG’s Department. Sgt. Rathnayake was convicted after a trial at bar. The conviction in its most critical parts was upheld by a five-judge bend of the Supreme Court, unanimously.

With the pardon, the judicial system is told that the rule of law is dead, and the law of the ruler predominates. The judiciary can do its best, but the executive will turn all that work into nothing.

The shameful and shaming silence on the part of Ranil Wickremesinghe, Sajith Premadasa and the JVP about this heinous pardon demonstrates that in the oppositional space, cowardice and opportunism prevail.

The virus of impunity took a great leap forward with the unpardonable pardoning of convicted murderer Army Sgt. Sunil Ratnayake. The pandemic it will birth will flourish long after the horrors of COVID-19 have become nothing but a memory.

Flouting the law; disembowelling the constitution

Sri Lanka Disaster Management Act, No. 13 of 2005 mandates the setting up of a National Council for Disaster Management, a non-partisan entity to deal with national emergencies. According to the Act, the members of this council should include the president, the prime minister, leader of opposition, 25 subject ministers and five members of the opposition nominated by the Speaker.

First the president ignored the possibility of the pandemic grabbing us by the throat, and dissolved the parliament, even though the parliament could have continued till August. Then he refused to listen to voices of reason, especially from the medical community, and adopted a politics as usual attitude. The task force he appointed to deal with the virus held televised meetings where members practiced the opposite of social distancing, sitting shoulder to shoulder. The president told the SAARC leaders that he will go ahead with the election and said that 28 COVID-19 patients is no reason to close down the country.

Once the nomination was complete, he took a great leap in the opposite direction and imposed a countrywide curfew. By maintaining and lifting the curfew in an arbitrary manner, he worsened public fears to the point of mindless panic.

Now he is paving the way for a constitutional crisis by refusing to rescind the gazette and re-summon the parliament.

In the early days, when the task force meetings acted as if it was some sort of daily show, a participant suggested handing the country over to the military for the duration of the pandemic. The president gave his signature laugh and said ‘I’d like to.’

A few days later he appointed another retired military man as the governor of the Western Province. Now some of his supporters are claiming that he can postpone the election at will, with no mandate from the judiciary, until the crisis is over. If the president follows this advice, Lankan democracy will be the most tragic victim of the pandemic.

The managing director of the IMF, Kristalina Georgieva, has warned that the pandemic has created an economic crisis like no other. One of the deadliest outcomes of the pandemic in Sri Lanka would be the creation of a class of new poor as the loss of livelihood and income forces a segment of the lower middle class to slip into poverty. Despair and anger are likely to be the dominant features in the mindset of this class. The recent actions of the government cannot but give rise to the fear that the rulers intend to use minorities as scapegoats, to divert and pacify the Sinhala members of this new poor.

The narrative of this or that minority furthering the pandemic might help the government in its power project, but it will condemn Sri Lanka to a future of endless societal violence.

Pandemics have always given birth to change. The world after a pandemic was never the world that prevailed before. If the signals emanating from the government are anything to go by, our post-pandemic future is likely to be one of racial violence and tyranny. Understanding that danger and confronting it is as important as doing everything possible to defeat the pandemic.