The Law of the Jungle Prevails, Editorial, Sunday Leader 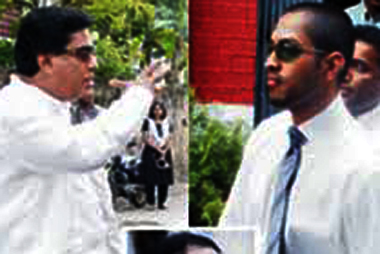 In the early hours of Sunday (9) morning Malaka Silva, who has gained notoriety after collisions with law enforcement officers particularly in night clubs had, with a supporting gang of goons, set upon two army intelligence officers at the JAIC Hilton and taken away a service revolver, a gold chain and a mobile telephone. That was the gist of the complaint made to the Police by the Army Officers.
Under normal circumstances if any individual staged such an act, for whatever reason, he would have been, within hours, rubbing bruised ribs and mending broken bones in an unidentified cell somewhere. But Malaka Silva is the notorious son of an abominably notorious father, Minister Mervyn Silva. The father’s infamy is built upon crimes committed on innocent civilians and bureaucrats.
The son, it appears, is improving on his father’s record by graduating from assault on civilians to those on the armed forces. And the son too, it appears, has gained the same political immunity for offences committed like his father. There is some evidence that the prodigal son, at least on this ocassion, may be  somewhat innocent. Please read the full story on pages 14 and 15.

Be that as it may, it is five days since the outrage took place at the JAIC Hilton, but young Silva is seen going around town quite unencumbered by police detectives even though the police spokesman SSP Ajith Rohana has made the traditional statement when such public outrages take place: Special police teams have been deployed to arrest the suspects. But Malaka Silva is as free as a bird or bee. The moot point is that even if young Silva is innocent, his statement should have been recorded and verified.

Quite in accordance with recent police traditions that are being built up, whether such special police teams can even catch a fly is doubtful let alone initiate an inquiry against the likes of the Silvas.

Such special teams were appointed to investigate the cold blooded murder of the founder editor of this newspaper Lasantha Wickrematunge in broad daylight on a public highway and also on the disappearance of journalist Prageeth Ekneligoda, the day before the Presidential election.

President Mahinda Rajapaksa has gone to great pains to make the City of Colombo look beautiful in the eyes of the 220 delegates of the Commonwealth Parliamentary Association Conference. Stray dogs, beggars and garbage have disappeared and even celebrations on the victory of three provincial council elections muted to impress upon delegates that ours is an exemplary democracy. But the antics of Malaka Silva and the apparent state patronage accorded to him had made even some pro-government media scream and have made the country stink. The beautification of Colombo and the projection of democratic governance of the Rajapaksa regime appear to be a facade to hide the nepotism and other misdemeanours in governance that are going on.

After the JAIC incident, junior Silva was seen in the sacred premises of the Kelaniya Temple where the Kapilavastu relics, believed to be that of the Buddha, were being exhibited for veneration by tens of thousands of Buddhists. According to some reports the sacred temple premises on that day was a virtual garrison with 500 personnel of the Special Task Force and 2,000 other policemen standing by. There were the senior police top brass to handle any eventuality. But this mighty force in khaki failed to identify the wanted man or they could not be bothered about him. They were there to provide security to the Buddha relics and the Kelaniya Temple, not go after miscreants. How convenient for them! Or is there another explanation?

A wag has another explanation. Those who worship the sacred relics will be exculpated from all crimes committed in the past. Thus, there was no point in arresting the ‘santha-dantha’ Silva Jr, who would have been cleansed of all his sins or was it that there was simply ‘no order from the top’. So why get a transfer order to Velvettiturai or some such place, would have been the rationalisation.

Mervyn Silva is now an outstanding exponent of the law of the jungle posing off as some ‘Kota Tarzan’ swinging freely from tree to tree. As ‘Kota Tarzan’ he has become the judge, jury and executioner and has the gumption to feel that he is extremely popular. ‘I like people and the people like me’, he had declared in a recent interview. What kind of people is he talking about? Animals? Civilisation has progressed enough to produce people who may not appreciate his hysterical outbursts and refuse to telecast them. Civilians, like officials who had not followed political orders being tied to trees are abhorred by decent people. But this ‘Kota Tarzan’ is still being entertained by leaders of this country. Tarzans have a tendency to proliferate and now we have a ‘Podi Tarzan’.

Some media organisations anxious to make a fast buck have found ‘Kota Tarzan’ to be quite a draw. He is a judge in a celebrity show and hobbles about like a lame duck. Some animals in ‘Kota Tarzan’s’ jungle may appreciate him but surely no responsible national media institution could promote this culture of the jungle.  We pointed out in our previous editorial that criminalisation of politics is fast spreading in South and South East Asia. In 2008, the Indian parliament had 120 MPs with criminal charges and 54.3 percent of them were from major parties. The figures would be much higher in the present Indian parliament.

Second string Sri Lankan politicians in the provincial councils are showing much promise in this direction. We read of them being accused of rape, abductions and robbery quite often. Soon they will graduate into parliament and we will have a Sovereign Criminal Independent Socialist Republic of Sri Lanka.
SL