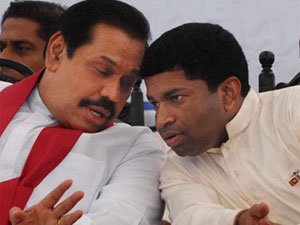 Pro-Government political analysts and pundits have hailed as outstanding the victory of the United People’s Freedom Alliance (UPFA) in last Saturday’s election to the Sabaragamuwa, Eastern and North Central provincial councils. But the government needs to look at the results not only in a magnanimous way but in a sober and realistic spirit.

Most independent analysts and observers are of the view that a free and fair election cannot be held under the present system where the executive presidency has been given absolute power with the enforcement of the 18th Amendment to the Constitution.
As a result, we saw more than 350 violations of the elections laws, mainly the abuse of public resources for the benefit of the candidates of the ruling alliance. The police were unwilling or unable to be independent or impartial because there is no independent police commission and officers who dare to act against the ruling alliance might face political vicimisation. Elections Commissioner Mahinda Deshapriya himself lamented he was helpless to prevent violations of election laws and violence because there is no independent elections commission. In India, for instance, the elections commissioner has wide power and independence to the extent that even the police service is under his control during the period of the polls.

With all the abuse and manipulation, the UPFA was able to win a clear majority in the Sabaragamuwa and the North Central Provinces. But the pro-government analysts’ claims that the main opposition United National Party (UNP) had been annihilated were baseless. In the 2010 parliamentary elections held in the afterglow of the war victory, the UNP obtained around 28 per cent of the votes or less than that in most districts including Polonnaruwa and Anuradhapura, Kegalle and Ratnapura. But in last Saturday’s PC elections, the divided, if not devastated, UNP polled about 35 per cent of the votes in these districts. The fate of the multi-ethnic Eastern Province is still unclear.

The elections were fought on ethnic lines — the very anti-thesis for a solid one Sri Lanka. The UPFA won the highest number of 14 seats including two bonus seats though questions are being raised about the manner in which the unpopular former chief minister Sivanesathurai Chandrakanthan alias Pillayan polled the highest number of votes in the Batticaloa District.

That means the combined opposition comprising mainly the Tamil National Alliance, the Sri Lanka Muslim Congress and the UNP obtained more than a two thirds majority in the East. Seen in terms of the popular vote and the will of the people, it appears to be unfair for a party which obtained only about one third of the vote to form the administration in the council.

UPFA leaders argued that the alliance has a right to do so because it obtained the highest number of seats, but opposition leaders and independent analysts say that while a UPFA administration might be legal it could be illegitimate. Reports indicate that intense back stage talks are going on between the UPFA, the SLMC, the TNA and the UNP with at least two senior ministers appealing to the TNA to form an administration of national unity. But the TNA is unlikely to accept any offers from the UPFA while TNA leader R. Sampanthan charged on Friday that the Rajapaksa administration had offered huge bribes and privileges to at least five newly elected TNA councillors.

Whatever the horse deals and manipulations similar to what the multi-million rupee mafia is doing in the Colombo Stock Exchange, the key factor here will be what the SLMC decides to do.

Whatever happens in the East, independent groups like the National Movement for Social Justice headed by the Ven. Maduluwawe Sobhitha Nayake Thera, believe that free and fair elections cannot be held until and unless the executive presidency is abolished. If that cannot be done, most independent observers believe that the Government must at least reactivate the 17th amendment under which an all-party constitutional council could appoint an independent elections commission, an independent police commission, an independent public service commission among others. We hope this would be done before any more elections are held so that democracy, accountability, good governance and transparency could be restored and consolidated.

Last Saturday’s elections to the three provincial councils were held not because most people wanted them but because the Government wanted to show the international community that the people were still behind it despite pressure by the United States, India and European Union countries for the implementation of the main recommendations of the Lessons Learnt and Reconciliation Commission and to address issues of accountability for alleged excesses during the last stages of the war. Whatever the message or the signals that went to the international community, it is more important for the Government to restore democratic principles and the rule of law.

At a time when corruption is rampant from top to bottom with the politicisation of crime and the criminalisation of politics, the latest allegation is that the controversial Minister Mervyn Silva’s equally controversial son Malaka had assaulted an Army Major after a drunken brawl in a five-star hotel last week. The minister on Friday claimed that the person assaulted by his son was not in uniform but the Government’s powerful ally the Jathika Hela Urumaya is demanding that tough action be taken against the minister’s son.

With the economy also reaching a breaking point due to the balance of payments crisis and the huge level of borrowing at commercial interest rates, the Rajapaksa administration needs to act fast and effectively to meet the basic needs of the people, reduce the cost of living, curb corruption, put the economy on the right track and restore the rule of law. Otherwise, what we might see in the coming months and years is not the model of Asia but socio-political muddle.
ST