“The key promises of justice and accountability are missing in the PM Wickremesinghe’s message.” – Navi Pillay 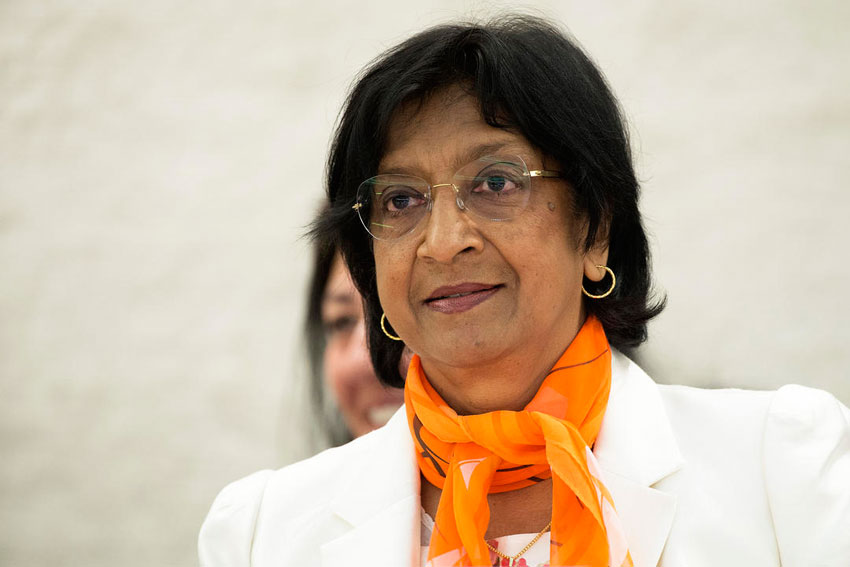 ‘’I am disappointed to learn that on the eve of the interactive dialogue on the Office of the United Nations High Commissioner for Human Rights’(OHCHR) report on Sri Lanka in the UN Human Rights Council, the Government of Sri Lanka is resorting to yet another delaying tactic to escape……implementation of Resolution 30/1,” she told Ceylon Today.

On Prime Minister Ranil Wickremesinghe’s recent call to the masses for a process of truth telling, regret and forgiveness, similar to the Truth and Reconciliation Commission (TRC) of South Africa, for a true reconciliation, Pillay said, “The key promises of justice and accountability are missing in the Prime Minister’s message.”

Pillay, while in Office had also been tough on Sri Lanka and continued to voice against the conduct of the local politicians’ time and again failing to work on a long-lasting reconciliation process for the people who have suffered from the bloodiest war in history.

Pillay, a famed judge and jurist of South Africa, said the Government accepted to address justice and accountability in post war Sri Lanka and appears, instead, to be retrogressing by seeking Cabinet approval for a truth and reconciliation mechanism alone.

She added that was a misrepresentation of the South African process; but in any event each TRC is unique and aimed to fit specific contexts.

The South African TRC model she added embraced the above, including truth telling, prosecutions and reparations.

“It was by no means a perfect system, but was conceived as politically expedient in the context of the events there but that context cannot be compared with the massive killings, disappearances and atrocious crimes suffered by populations in Sri Lanka.”

She reiterated that the UN has promoted TRCs in conflict and post conflict contexts as part of transitional processes. Transitional justice is concerned with how societies emerging from conflict or from repressive rule address the legacy of past violations of International Humanitarian law and human rights, ensuring accountability, justice and reconciliation. The experience of those who suffered human rights violations must be central to shaping transitional justice responses. This means respect for rights of participation, gender perspective and implementation of the rights of victims to an effective remedy, she noted.

She pointed out that Transitional Justice (TJ) rests on four pillars: the right to the truth; the right to justice; the right to reparations and the duty of states to prevent the recurrence of violations.

“The goal is to restore and protect the rights of individuals and recreate bonds of trust between citizens and state, principally through respect for the rule of law.”
Out of experiences in the world, the UN Secretary General in his report of 2004, spells out transitional justice as the full range of processes and mechanisms associated with a society’s attempts to come to terms with a legacy of large scale past abuses, in order to ensure accountability, serve justice and achieve reconciliation. It consists of judicial and non-judicial processes and mechanisms, including truth seeking initiatives, prosecutions, and reparations programmed, institutional reforms and amnesty provisions.

“Contrary to what the Prime Minister said, South Africans did not stop filing cases arising from the conflict. In fact, just this past month, the family of the late Ahmed Timol, who died in Police detention, officially from suicide, charged a security policeman for his murder, after evidence, (That had not been brought forth at the TRC), was disclosed at a recent judicial inquest.

Contrary to what the Prime Minister is saying, reconciliation, in overcoming divisions and building trust, cannot be understood as a call for impunity or disregard of victims’ rights, she added.

“If Sri Lanka intends to establish a TRC, then it is important that the rulers follow what President Nelson Mandela did when he set up a TRC: comprehensive national consultations, broad based participation of civil society, protection of witnesses, independence of the commissioners exclusive of any political interference, she advised the nation that is struggling to formulate a process that is very much in need,” she said