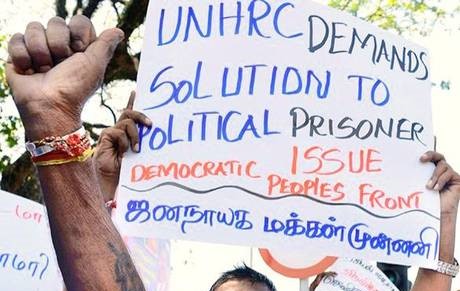 (The Hindu/Meera Srinivasan  23.02.19) Sri Lankan ethnic Tamils demonstrate outside the main prison in Colombo on February 26, 2014. The protest was held to demand the release of what demonstraters call political prisoners, a reference to suspected Tamil rebels held in custody for long periods without trial. Sri Lanka faces international censure over alleged war crimes while crushing Tamil Tiger rebels in a no-holds-barred offensive in May 2009.

Though the current government has overseen some initiatives to address the U.N.’s concerns, critics see the efforts as merely checking the boxes.
It is that time of the year when Sri Lanka’s war-hit north and east come under sharper focus. The 40th session of the UN Human Rights Council will commence on February 25 and go on till March 22 in Geneva.

A “core group” on Sri Lanka, comprising Canada, Germany, Macedonia, Montenegro and the U.K., is expected to present a resolution on promoting reconciliation, accountability and human rights in Sri Lanka. The group will continue to work in partnership with Sri Lanka, in a bid to take forward the joint resolution that Sri Lanka co-sponsored in 2015. In 2017, Sri Lanka obtained a two-year extension to implement it. The upcoming resolution essentially ensures continuing international oversight.

While the current government takes pride in setting off some significant initiatives to fulfil its commitments, its critics see them as ‘merely checking the boxes’ to please the international community.

Meanwhile, there is some buzz around the government constituting a Truth and Justice Commission — reportedly mooted by Prime Minister Ranil Wickremesinghe in the Cabinet — but there is little clarity on the political consensus to establish it.

The question of accountability for the Sri Lankan state’s war-time excesses has remained a touchy issue for southern leaders, as many in their constituencies hail soldiers as war-heroes, and subjecting them to any scrutiny is a political risk. Conversely, the aversion among southern leaders to any truth-seeking mechanism puts off Tamil campaigners, desperately seeking a resolution of burning questions, be it on the truth about a missing relative or the mystery surrounding the whereabouts of a relative they saw surrender to the Army.

Time to forget the past?

When Mr. Wickremesinghe, during his recent visit to the north, said it was time to forget the past and forgive those who committed “mistakes” and move ahead towards reconciliation, it didn’t go down well with many in the north or south. All the same, his development drive is witnessing some belated, but welcome momentum.

He oversaw the $45 million-project around the Kankesanthurai harbour, supported by India, and spoke of developing it into a commercial port to help build an economic hub around it. The government yet again announced its plan to upgrade Palaly airport in Jaffna into an international airport, with direct flights to India, Australia, Japan, Europe and West Asian countries. Following his visit, Mr. Wickremesinghe instructed Minister for Transport and Civil Aviation Arjuna Ranatunga to commence development work on it.

Meanwhile, the Finance Ministry and the Central Bank are focussed on addressing the widely-prevalent household debt problem, pressuring thousands. Caused mostly by exploitative microcredit by way of expensive loans, indebtedness has emerged as a key post-war issue.

From former President Mahinda Rajapaksa’s time, it was the gap between massive infrastructure development and people’s fundamental bread and butter issues that led them to predatory credit. The roads and electricity that Mr. Rajapaksa built did little to address poverty and the requirements of a community ravaged and dispossessed by a three-decade war. That, along with the present administration’s insufficient push, has left residents of the north and east in a dire economic situation. Nearly 10 years may have passed since the war ended, but there is little evidence in people’s lives showing any progress in that time.

Even matters as basic as housing for the war-displaced have seen inordinate delays. After a controversial project for prefabricated steel houses was rejected by the community, activists and the Tamil political leadership, the government is yet to initiate an alternative scheme, despite the Cabinet approving the construction of 25,000 brick houses in the northeast almost eight months ago.

The war-affected community’s basic needs have awaited attention and action for a decade. Like in India, it is election year in Sri Lanka. Politicians should not wait until they can make another poll promise.