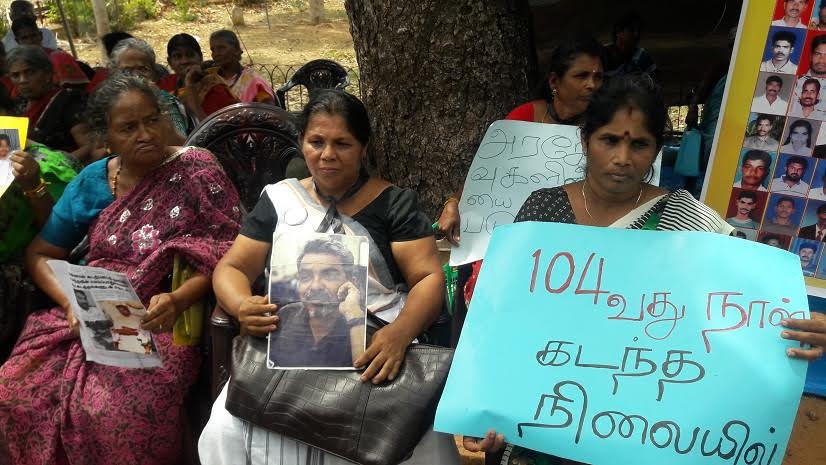 Image: Many women have lost husbands or family members due to war, whether by death or disappearance.

In 2009, the 26 years of civil war in Sri Lanka, much of which was fought in the Northern and Eastern Provinces of the country, came to an end. Many women in the war-affected regions have dealt with multiple long-term impacts of the violent conflict such as injuries; loss of lives, property, income sources, and livelihood activities; multiple displacements; and trauma, amongst other impacts, which have placed many households in a precarious situation when trying to rebuild their lives. Various reports have estimated over 500,000 internal and external displacements and a significant increase in war widows and female heads of households during the course of the war. While the number of deaths and the economic cost in loss of property, income, and assets is difficult to calculate, these losses have had devastating impacts on communities in the affected regions.

This policy brief will discuss the long-term, direct impacts that the war has had on women’s labour market engagement in the Northern Province of Sri Lanka in the post-war context, emphasizing factors affecting female heads of households. The findings discussed in this brief are based on the quantitative and qualitative research conducted by the International Centre for Ethnic Studies.

In this research study, two separate research instruments were used, including a quantitative survey and qualitative interviews amongst the Tamil, Muslim, and Sinhala communities in five districts of the Northern Province of Sri Lanka. Survey data was gathered from 4025 households, with 75% of the respondents being female heads of household, in Mannar, Kilinochchi, Mullaitivu, Jaffna, and Vavuniya districts during the period of January to August of 2015. Another 120 qualitative interviews were also conducted: 41 in Jaffna, 23 in Mullaitivu, 20 in Kilinochchi, 16 in Vavuniya, and 20 in Mannar during the period of January 2015 to mid-2016.

“The 26 years of war in Sri Lanka have exacerbated women’s existing structural barriers to engaging in livelihood activities in the Northern Province.”

Women have always faced institutional, political, and socio-cultural gender barriers to livelihood engagement and labour force participation. However, the 26 years of war in Sri Lanka have exacerbated women’s existing structural barriers to engaging in livelihood activities in the Northern Province. Many women in the region have experienced loss of lives, property, incomes, and livelihood activities, amongst other losses, due to war and displacement.

Of the women interviewed, 63% of women heading their households had moved to their current location following displacement, compared to 39% of women in male-headed households.

“Many women, between 50-60% of respondents, have lost their homes or have had homes damaged during the war. “

The ownership of land and a house is positively associated with labour force participation as it can enable self-employment activities for women.

However, many women, between 50-60% of respondents, have lost their homes or have had homes damaged during the war. Reconstructing their homes is an added financial burden when rebuilding their lives as housing reconstruction requires significant capital. For women in male-headed households, damage to housing is associated with a 30% increased probability of engaging in market work.

While many women received government- or NGOsponsored assistance for housing, accounting for 24% of interventions in the study, the funds and grants given have been insufficient. As a result, many women are forced to take out loans and sell or pawn valuable jewellery in order to complete their homes. This has caused some women to accumulate high debts and lose important sources of capital.

In other cases, women who are unable to afford the full reconstruction of their homes are unable to develop infrastructure for important resources such as water wells for agricultural and domestic purposes. This limits women from engaging in home-based livelihood activities, which are preferred by many female heads of households who are juggling care responsibilities with the responsibility of being the household’s main income earner. Even whilst owning land, female heads of households who engage in agriculture and cultivation face limitations in accessing manual labour support.

Greater education attainment is positively correlated with higher labour force participation and higher wages. For female heads of households, education up to at least GCE A’Levels is correlated with a wage increase of 26%, relative to women with primary level education. However, many women in the region have experienced permanent disruption to their education as a direct result of war and displacement. Such women may find it difficult to access livelihoods which yield better incomes.

However, economic distress drives female heads of households to the labour market despite the burden of balancing their care responsibilities without adequate support.

The qualitative study finds that women who have experienced disappearances of husbands and/or family members due to war suffer from the uncertainty and ambiguity of that loss, which leads to extreme mental health issues. This is an added burden on women when engaging in livelihood activities.

As the research shows that losses due to war including loss of lives and resources have had long-term psychological impacts on war-affected women, provide community-based occupational therapy for women in affected areas including proper counselling facilities in hospitals; and ensure counselling facility staff are adequately trained in providing psychosocial support in war-affected areas. Use community-based, creative initiatives, such as community gardens, arts and crafts circles, and yoga, to address psychological health issues experienced by women.

Many women in the Northern Province have had their education permanently interrupted due to war and displacement. As higher education attainment is correlated with higher wages, increase opportunities for women to re-enter education systems in order to access career paths with higher returns. Provide alternative schooling options for women heading their households, especially those juggling care responsibilities at home.

As educational attainment in the Northern Province appear to be lower than the national average, improve education facilities and services in the region to enhance women’s employability and productivity. Utilize IT-based educational facilities in order to fill gaps in available facilities.

As balancing care work with labour activities is an added barrier for female heads of households who have lost their spouses, recognize care work and multiple roles of women and increase care facilities and support for women through national policy and programmes.

While many women received land and housing assistance, the interventions provided were at times insufficient leaving many female heads of households with the burden of taking loans or selling jewellery in order to meet their household needs. Therefore, it is important to provide sufficient reparations and compensation for loss of resources due to war for women, especially related to land and productive assets. Furthermore, more information and transparency in the land return and redistribution processes, especially in the case of female heads of households, should be prioritized.

Brief produced by Savini Ganhewa. Opinions stated in this brief and the paper it draws from, are those of the author’s, and do not necessarily reflect the views of the GLOW programme partners.