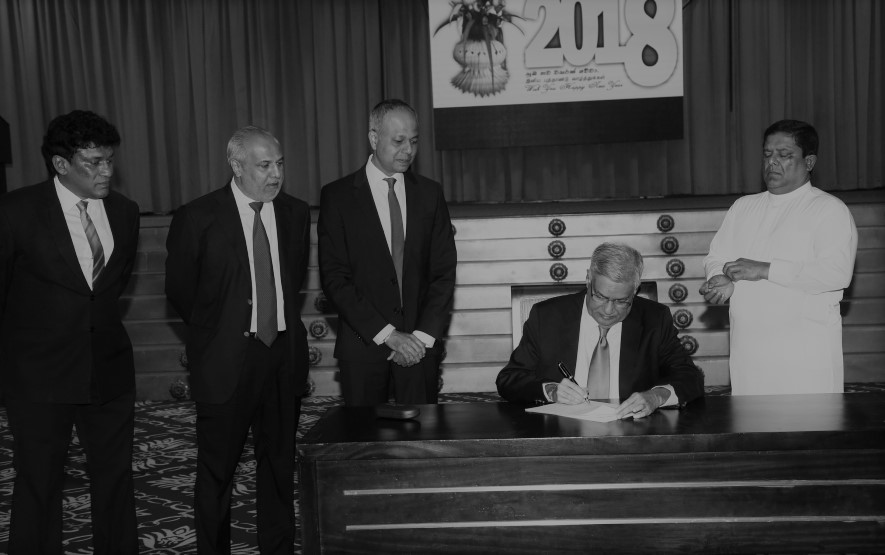 Image: PM Wickremesinghe  singed the proposed criteria for media to be presented to parliament.

Today the Prime Minister Ranil Wickremesinghe  signed the proposed criteria for media to be presented to parliament on the conduct of an unbiased and just election according to the constitution.

The Election Commission published 32 criteria to media, through a gazette notification on 4th December and cabinet approval was granted.

The guidelines have been approved by the Cabinet of Ministers and parliament’s approval is sought in order to make the document more legitimate. All media divisions will be bound by the criteria and it is their responsibility and duty to abide by them.

In terms of provisions in the Article 23 (5) (a) of the 19th Amendment to the Constitution of the Democratic Socialist Republic of Sri Lanka and in particular, to ensure rightful exercise of franchise and a free and fair election or referendum, following guidelines are issued by the Commissioner of Elections / Election Commission, to be followed by all electronic and print media institutions and personnel involved.

01. All telecasting, broadcasting and print media shall be neutral and impartial in their reporting of election related matters and shall not discriminate any contesting political party / independent group or a candidate, in allocating airtime and allotting space in the newspapers.

04. Programme presenters and announcers of television and radio channels respectively, should refrain from expressing personal views at the newspaper desks where newspaper headlines and cartoons are presented, since such views may promote one party with prejudice to another.

05. It is the responsibility of the news and current affairs divisions of all electronic and print media institutions not to broadcast/ televise/publish any programme or supplement during the election period, if such programme/supplement/news items are illegal or biased.

06. If any material is broadcast/ televised/published covering an incident or an event with comments of one candidate, all other political parties that have an interest on the event or are concerned, or are likely to be affected, should also be given opportunity to express their version in the same news item or programme or at another occasion.

07. All documentary programmes or special programmes which are directly connected with the election and broadcast/ televised during the period of election, should disclose the names of the script writer, announcer and the editor. If the particular media institution has retained the right not to disclose same, the person in charge of the programme should be held responsible for its contents.

08. Air time of any programme or news bulletin should not be utilized for unsubstantiated allegations against candidates contesting at an election that cannot be reasonably proved. If a candidate or a political party claims that another candidate or a supporter has made any false statement against him/her/party, opportunity should be availed of to him/her/party to counter same.

09. When airing/publishing news or programmes which are not related to the election, such as official functions and events related to crimes, all media institutions should consult the parties involved for clarity, since such news/programmes could promote or demote some candidate or a party.

10. Coverage given by the Radio or Television to opinions/ views expressed by the President or Prime Minister or Ministers should be treated as a coverage given to the political party to which he/ she belongs and therefore leaders of rival political parties contesting the election should also be given opportunity in similar programmes. The print media should similarly provide equal space and prominence to all political parties/ candidates in publishing special discussions and reporting campaign meetings.

11. Special favours should not be given in air time or in the print media to one or more candidates to promote his/her/their election or to cause disadvantage to another.

12. Refrain from publishing or broadcasting lectures, interviews, etc. with public officers which promote any contesting candidate or cause disadvantage to other candidates.

13. All electronic media institutions should act fairly in selecting participants for panel discussions and as such, the composition of the discussion should be balanced. They should refrain from directing programmes to cause disadvantage to any representative who has poor language proficiency. When publishing interviews of politicians with poor language proficiency, print media shall not create uncomfortable situations to them. Information obtained through vague and incomprehensible questions should not be published, or such questions should never be asked. At the outset, the participant in the programme should be warned not to make statements which are unethical or harmful to the communal harmony, and if such statements are made while the discussion is in progress, the programme should be discontinued then and there.

15. If any Chairperson, Member of the Board of Management, Directors or a responsible journalist of any electronic or print media institution actively engages in political activities, such activities cause conflict of interest in balanced broadcasting/publishing. Hence, such officers/ employees shall inform of the following in writing in advance to the management of the institution.

16. When an individual holding a leading post in a recognized political party (Leader, Chairman, Secretary, National Organizer, Treasurer, Deputy Leader, Assistant Leader, Senior Deputy Chairman or a post with similar powers) and holding a dominant office such as the Chairman/ Member of the Board of Directors, Chief Executive/ Chief Editor in a media institution, and if he/she is a candidate at the election or if his/ her party is contesting directly or under a recognized alliance, such person should refrain from actively engaging in duties of his/ her post of the media institution. If such person is contesting as a candidate while holding office in a contesting party at an election, he / she should refrain from anchoring/moderating programmes of a political nature in television or broadcasting institution and in the case of print media he / she should not publish his/ her own political articles through that media institution.

17. When a person/ a representative of a party refuses to participate at a discussion or interview and chooses not to offer reasons for his/her absence, the media institution shall respect his/her position. Drama-like situations such as displaying of an empty chair etc., should not be employed to underline a refusal. It is encouraged to make a simple and direct announcement on the absence of the participant. .

18. A broadcaster who broadcasts or print media that publishes the result of an opinion poll, should announce the name of the organization that conducted the poll, the organization or the person that commissioned and funded the poll, methodology employed, the size of the sample, margin of error and the period of fieldwork. In addition the broadcaster or publisher should state that the poll reflects the public opinion only at the time of the poll was taken.

19. No statement where a candidate promotes candidature of another contestant of another party or group be broadcast, telecast or published.

20. Media personnel should not engage in taking photographs or videoing of the inside of polling stations or postal voting centres as the Commissioner of Elections / Election Commission has prohibited such activities without written consent. Any photographs or video visuals obtained illegally should not be published in newspapers, televised or promoted through any media. Even the photographs and visuals obtained with the approval of the Commissioner, should be published or televised only after the poll.

21. It is considered vital that a period of silence prevails just before the date of poll to enable the voter to contemplate and consider the pros and cons of various policies announced and promises made by political parties and candidates during the election campaign. The media shall refrain from televising broadcasting or publishing discussions, debates, advertisements, etc. related to the election during the period of silence (period of refraining from carrying out propaganda), enacted by law (48 hours), prior to the date of an election.

24. Refrain from republishing or repeat telecasting of statements expressed previously by a candidate or a supporter about another candidate, without the consent of the declarant and honour the request made by a declarant not to repeat such statements made by him/her previously.

26. National Anthem, National Flag, religious symbols, religious flags, paintings or photograph of founders of religions or religious leaders shall not be published or broadcast to promote or demote the candidature of a candidate or a party/group. Notices or advertisements of such nature shall not be broadcast/ televised/ published.

27. Media institutions shall be accountable with regard to publishing/ broadcasting/ televising incorrect statements/news and they will be subject to legal implications that would arise in this regard.

28. It is the responsibility of all electronic / print media institutions to adhere and abide by the moral ethics of media.

29. According to the 19th Amendment to the Constitution, the use of state property and funds by state media institutions to promote political parties/ groups/ candidates is illegal and it is also an offence to cause loss to the government revenue and act to cause damage to the institution. All government and semi government media institutions shall refrain from engaging in such activities as disciplinary action could be instituted on those responsible, in addition to the punishments prescribed in the Constitution.

30. It is expected that the proprietors of all electronic and print media shall adhere to the guidelines given above and that they ensure their institutions observe them earnestly.

31. It is also expected that the administrators of social media sites shall also follow the above guidelines as applicable to them, during the election period.

32. It is not only the duty, but also the responsibility of the proprietors of media institutions and administrators/ users of social media to adhere to the above guidelines, because it is quintessential to follow them during the election period.

33. The Standing Committee comprising of permanent representatives of political parties, the Coordinating Officers of the National Centre for Investigation of Election Complaints and representatives of Observer Organizations recognised by the Commissioner of Elections, will intervene in the issues arising in the implementation of the guidelines and express their views and recommendations. Their views and recommendations shall be considered by the Standing Committee for Media guidelines comprising of officers of the Department of Elections, representatives of Ministry of Media and Department of Information, along with the views/observations of the Human Rights Commission of Sri Lanka and shall make decisions. Media institutions shall act according to these decisions. Implementation of these guidelines will be by consensus of this Committee which is established to direct, observe and monitor the implementation of these guidelines.

34. Media institution or any journalist is not bound to publish or broadcast, any order or a request, made by a political party/ a candidate, violating the aforesaid guidelines. At such instances such institution or the journalist has the right to seek legal assistance.

These media guidelines are issued to create a conducive environment for a free and fair election. It is, therefore, the responsibility of all political parties, independent groups, and political activists, election observer organizations, civil society organizations and every citizen of this country to support media institutions to implement them and to prevent obstructions in the implementation of same. Hence, the Election Commission, the Commissioner of Elections anticipates all concerned parties will extend their cooperation to all media institutions to act according to these media guidelines.