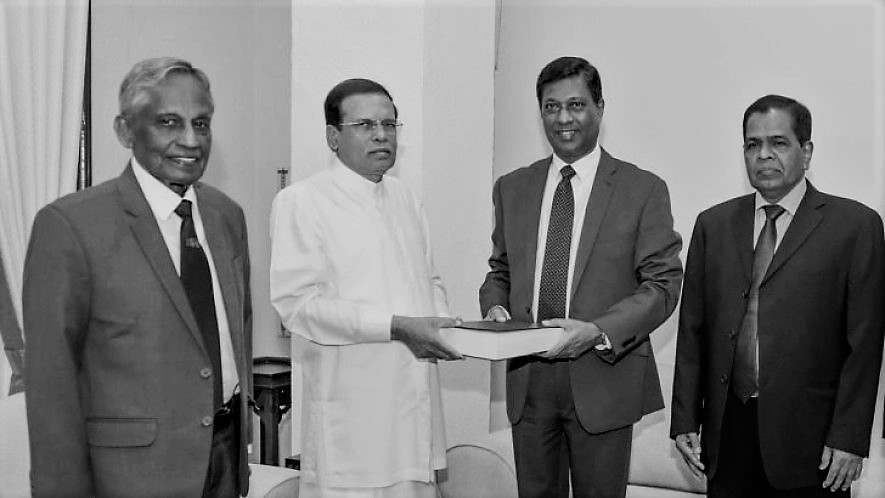 Image: Commission report was handed over to president on 30th December 2017.

May the Triple Gem Bless You!

First of all, I offer my best wishes for the New Year.

“As the people of the country are eagerly waiting with high interest, I wish to make a statement on the final report of the Presidential Commission of Inquiry (PCoI) into the Issue of Treasury Bonds of the Central Bank of Sri Lanka, which was appointed by me taking into consideration the opinion of the people regarding allegations of corrupt practices and misdeeds during the period 2015 and 2016. Its report was handed over to me on December 30, 2017.

“The Commission was mandated to inquire into the issuance of Treasury Bonds during the period from 1st February 2015 to 31st March 2016 to find out actual facts and to make recommendations as to the steps to be implemented in the future.

“I thank the Supreme Court Judges and former Auditor-General who functioned as members of the Commission and its Secretary and the staff, and those who assisted the work of the Commission, Attorney General’s Department, Police Department and other relevant organisations and individuals.

“The Commission is of the opinion that similar incidents as revealed in the Commission Report had happened even in 2008. The Commission recommends that the Central Bank of Sri Lanka should first conduct a forensic audit with regard to the alleged fraud and corrupt practices from 2008 on wards, and based on such findings, legal actions should be taken.

Commission states that funds of the Employment Provident Fund (EPF) were lost mostly during that period.

“The Commission has clearly stated the structure of the Central Bank, Public Debt Department, direct issuance of Treasury Bonds and the pros and cons of the system of issuance of bonds as well as bond auctions. The report stated that the Perpetual Treasuries Limited has earned profits through means that are not legal, with the involvement of Arjun Mahendran, Bank officials and some external parties.

In the auction held on 27thFebruary 2015 alone, Perpetual Treasuries Limited has made a minimum profit not less than Rs 688 million. The Commission is of the opinion that further investigations could reveal that this amount could even be more than that. As revealed during the investigations, PTL has made an undue profit of Rs.11,145 millions in the secondary market. In this, EPF and other government institutions had lost more than Rs. 8,524 million or Rs. 8.5 billion.

“It is stated that senior officials of the Central Bank were inactive before the former Governor of Central Bank, Arjun Mahendran. The report states that, such false decisions have been made because these officers had become inactive.

“Mr. Mahendran has made interference into Treasury bond auctions through a process of incorrect and unconventional methods and he was responsible for providing internal information to outsiders. Such conduct has allowed one party to obtain undue monetary gains, the report states.

“Members of Monetary Board and Central Bank Governor must be appointed by the Constitutional Council in concurrence of the members. The regulations must be amended accordingly.

“As the Commission did not have the mandate to inquire into Treasury bond issues from 2008 to 2015, the Commission had not done that. However, Commission recommends that there should be an investigation into that period too.

The Commission recommends that the dealings with the Pan Asia Bank and the conduct of Chairman must be investigated into. It also recommends that activities of the EPF must be looked into, and in order to bring the EPF into a proper order, steps must be taken to restructure the EPF.A code of conduct for the officials of the Central Bank must be introduced. The code of conduct for Primary Dealers must be revised and updated.

“Under normal circumstances, recovery of money can be done through civil legal action. However, it is a time consuming method. As an alternative, the Commission recommends that a Parliamentary legislation could be passed and the money could be recovered in a speedy manner following a Parliamentary approval. We agree to that recommendation.

The recommendation of the Commission is that all the expenditure occurred for the Commission must be recovered from the Perpetual Treasuries Limited.

“I wish to clarify here, that a minor amendment to the Bribery or Corruption Commission Act must be enacted to take legal action on the recommendations of the Commission. For this purpose, experts at the Legal Draughtsman are already working on the required amendment.

The steps needed to make the Commission to investigate allegations of Bribery or Corruption more active and efficient should have been done long time ago, and now we are taking required steps for that purpose.

“The confidentiality,astuteness and auditing methods of the Central Bank of Sri Lanka were extremely weak. There were no tele-recording systems, electronic monitoring or even CCTVs. The current Governor of the Central bank has already taken steps to remove weaknesses and rectify these errors.

The Governor has informed that he has suspended some employees of the Central bank after their malpractices were revealed in the investigations in the Commission and disciplinary actions are being taken against those officers.

I expect the Governor to make a statement in the near future regarding the shortcomings in the Central bank as revealed in the Commission Report.

“I urge the Justice Ministry and the Attorney General to take early steps to draft the three bills proposed by the Commission present them to Parliament, in order to make required changes at the Central Bank to ensure such corrupt practices, frauds and malpractices would not take place in the future.

“I have informed my Secretary to hold monthly review meetings with the heads of relevant departments and institutions to examine the progress in implementations of the recommendations of the Commission to take legal steps against those individuals and take other required steps in an efficient and speedy manner.

“I would like to specifically state here that I would not hesitate to take steps to recover the loss of Rs 11145 million to the government and take legal action against the offenders and punish them.

“The sum of Rs 8529 million of the total losses Rs 11,145 million was the funds of the Employees Provident Fund, Mahapola Scholarship Fund, National Savings Bank and Sri Lanka Insurance Corporation. The balance was from private institutions. Hence the loss to the public sector – EPF, Mahapola, NDB and SLIC was over Rs 8.5 billion. The Perpetual Treasuries Limited has made this profit of Rs 11,145 million within a short period of 5 months.

“Finally, especially I would like to mention that this final report must be presented to the Parliament and through this initiative the report must be open to the public. In the future, necessary as well as legal steps in this regard will be taken expeditiously according to the advice from the Attorney General. I kindly request to consider the openness of the facts of this Commission Report and I assure that any hesitation would not occur in filing cases against the offenders. Furthermore, I wish to state that this is the final report of the Commission.

“I have previously appointed a Commission and the report of that has been handed over to me. It is the final report of the Presidential Commission of Inquiry to investigate and inquire into Serious Acts of Fraud, Corruption and Abuse of Power, State Resources and Privileges (PRECIFAC).

“This Commission carried out their respective duties during the past two and half years. I extend my gratitude to the staff of the Commission and all the institutions including the Secretary and High Court judges for giving their support in this task. Already, 34 reports of that Commission had been handed over to me and recently 17 reports have been handed over and another 17 previously, the 17 reports handed over previously I have submitted to the Attorney General to take necessary actions through relevant institutions.

“By now, the Fraud and Corruption Commission, institutions, departments and Police have taken actions to file cases based on the facts of these reports. The report which was handed over to me before two days I will submit to Attorney General within this week to take appropriate actions.Especially I have to mention the actions on this report will be taken in the near future.

The Presidential Commission of Inquiry to investigate and inquire into Serious Acts of Fraud, Corruption and Abuse of Power, State Resources and Privileges has presented several major facts and it is the responsibility of the Government to implement facts presented at the Commission. I will explain to you regarding those facts for the general public information. Training and appointment of suitable officials as there is lack for skilled well-trained officials to carry out investigation regarding fraud and corruptions. This Commission emphasized that people without required qualifications had been appointed and only the qualified persons should be appointed to essential positions including the State institutions, Authorities and Constitutional Boards.

“The Commission revealed that the money spent by the Government for the establishment of this Commission has already been recovered through the cases initiated through the findings of this Commission. A system must be implemented to hearing the cases in the courts in other areas as holding these cases only in Courts in Colombo is causing difficulties for those who travel from distances.

“I must states a special thing, before I conclude the facts of these two reports, I saw a great eagerness and inquiring trend among the general public regarding these Commissions. At the same time when the Commissions were appointed, especially before the appointment of the Treasury Bond Commission as well as at the time of appointing this Commission. , the same destiny happen to other Commissions will be happen to this Commission too and I saw in media some in the Parliament and outside the Parliament too commenting that this Commission will be appoint to hidden the prevailing issues. But all of us must be very pleased regarding the fulfillment of duties of these Commissions and again I must thank the judges and all who contributed in this regard for their great service rendered while wining the confidence of the general public.

“Finally, I must state regarding the allegations leveled against me by some political parties for appointing these Commissions and I never appointed these commissions targeting any political party. I must specially mention in future when filing cases according to the recommendations and information of these Commissions, individuals belongs to two main political parties will be defendants in the legal process. We must be happy over our independent and impartial Judiciary. I must state all of us will provide our maximum support for this process.