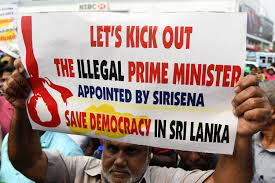 This week, a citizen called into a popular (Sinhala) political programme on national television and asked the Minister being interviewed as to why it was that, one year following the 52-day old ‘coup’ in October 2018 installing former President Mahinda Rajapaksa as Prime Minister, no legal action had been taken against rowdy parliamentarians who smashed the Speaker’s microphone, poured water on his chair and threw chili paste into the eyes of policemen guarding him.

As the caller pointed out acidly, if an ‘ordinary person’ had destroyed public property and assaulted law enforcement officers, jailtime would have been certain.

This is a valid question. True to type, the Minister on the receiving end of this enraged query, stammered and stumbled, first saying that the Rajapaksa-led Joint Opposition had opposed taking action against the culprits who belonged primarily to their party and then complaining that the Attorney General has yet to revert on the matter. So, as Prime Minister Ranil Wickremesinghe pats his Government on the back as he did this Saturday night, for constitutionally tackling the ‘coup’ sans spilling a drop of blood, more searching questions arise. The grossly unequal manner in which the law is worked against ‘the powerful’ and ‘the powerless’ defeating ‘yahapalanaya’ (good governance) promises is a major reason as to why this administration has evoked public anger.

Indeed, the anti-incumbency factor has become one of the strongest obstacles facing the United National Party-led alliance’s candidate, Sajith Premadasa in the forthcoming Presidential elections. Given implacable foes both inside and outside his own party, he is trying to overcome this by projecting himself as a potential President who will steer a radically different path to the current ‘bankrupt’ administration. The term ‘bankrupt’ was used this week by none other than Premadasa himself to define the past four years. He has asked the public to understand that he was merely a Minister with defined portfolios and therefore could do little as opposed to having control over the State in which case, he promises to do much.

Certainly Premadasa must be credited for having dexterously turned the toxic usage of Sinhala-Buddhism by Rajapaksa followers on its head in questioning as to who a true Sinhala Buddhist is. The reminder that hatred against persons of a different race or creed is a perversion of the teachings of the Gautama Buddha is of considerable significance. Questioning as to why the Rajapaksa regime, despite flaunting Sinhala-Buddhist colours, did very little for the upliftment of marginalised and poor temples throughout the land during its decade of rule, goes to the core of that challenge. In so doing, Premadasa has refrained from parroting constitutional cliches which had been the chorus call of the 2015 ‘yahapalanaya’ bandwagon. This is a profound relief. The betrayal of those promises from the North to the South is still ringing in our ears.

Recognising the ‘Deep State’ at many levels

Why that betrayal occurred is now clear. During the past few years, Sri Lanka’s ‘Deep State’ has come to the surface, ranging from Ministers of Justice and Law and Order and state law officers frustrating the law to a senior criminal investigative officer hopping on the ‘Pohottuwa’ media platform in a quid pro quo for protection from punishment for money laundering. But how were they allowed to continue in key state and political positions without being dealt with? It is not, after all, that these misdeeds were not known.

For example, when the Inspector General of Police (IGP) was featured on national television assuring then Law and Order Minister Sagala Ratnayake that a Rajapaksa favourite will not be arrested, swift action should have been taken. But this did not happen. Instead, the IGP proceeded from one fiasco to another until he is now in jail but yet not removed from his office. What is this absurdity? It is not as if an Act of God is called for to remove the IGP. This only requires a simple procedure on the floor of the House. Yet that does not take place. That dysfunction is not by chance. Instead, this is quite deliberate.

The monstrous operation of Sri Lanka’s ‘Deep State’ is tentacle-like. It is evidenced quite clearly in the report of the Parliamentary Select Committee investigating the Easter Sunday jihadist attacks which concluded that there was no evident link between the jihadists and the Islamist State.

That is a fact that a grieving father in Katuwapitiya who is still mourning the death of his wife and children could have informed parliamentarians who sat on that committee, six months ago. Ignoring local intelligence warnings and the collective dereliction of duty by state intelligence officials all speak to a truth that is too horrific to contemplate. But why is only the IGP and the Secretary, Ministry of Defence dealt with for that failure? This is the Deep State in defiant operation.

A struggle between the old and the new

Thus too, the boast of former Justice Minister Wijeyadasa Rajapaksa that he intervened to stop the Attorney General from prosecuting Presidential contender of the Sri Lanka Podujana Party led coalition, Gotabhaya Rajapaksa in regard to huge lossed caused to the state coffers as a result of Avant-Garde Maritime Services (Pvt) Ltd maintaining a floating armoury at the Galle Port during his brother’s Presidency. Indeed, this strange case has stranger twists and turns. Two other Ministers were earlier alleged to have safeguarded Avant-Garde suspects. One former senior state law officer has alleged that he had resisted pressure from ‘yahapalanaya’ politicians to prosecute Rajapaksa while yet another in counter, contended bias on his colleague’s part, claiming that the law was deliberately prevented from taking its course.

Further, an indictment filed in this same case by the Bribery and Corruption Commission (CIABOC) under the hand of a controversial Deputy Solicitor General while serving as the CIABOC DG was thrown out of court for failure to adhere to legal procedure. Several queries however remain unanswered. Was there not a team of lawyers from the private Bar along with state lawyers supervising the integrity of the prosecutions? If so, why and how such criminal carelessness? As must be recalled, this is the same state law officer who was recorded in conversation with a key suspect in the case, saying that she can make or break the law, that she will not proceed against Rajapaksa and that she regretted taking any action at all.

As ugly realities of the ‘Deep State’ continue to surface under the glossy exterior of ‘protecting the country’, this upcoming Presidential election promises to be even more fraught than the fight between Mahinda Rajapaksa and ‘yahapalanaya’ propelled Maithripala Sirisena in 2015. This time, the struggle is for the democratic heart of the country, between a (relatively) young challenger who valiantly promises the future to be different from an imperfect past and old, dangerously familiar foes.

Truly, we face agonising times ahead.